Govt to provide ration to the poor, CM Kamal says

Govt to provide ration to the poor, CM Kamal says

The DC should take strict measur­es to contro­l price in their distri­cts
By Mohammad Zafar
Published: March 26, 2020
Tweet Email 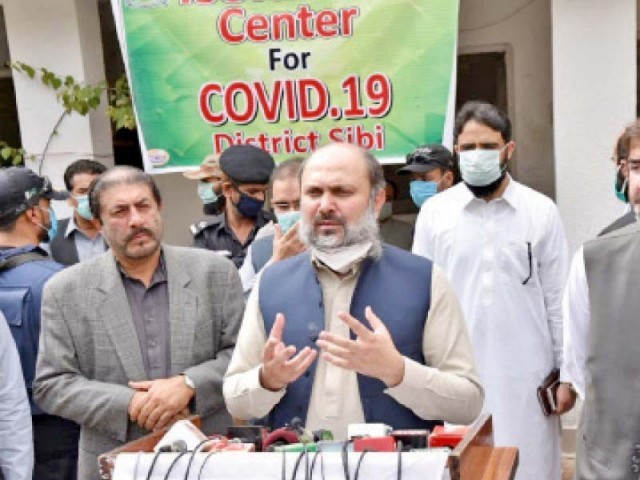 While speaking to the media during a one day visit to Sibi, he said coronavirus is not only a problem in Balochistan but the entire country and the rest of the world. “I am visiting various districts of Balochistan, so that precautionary measures are taken to address the virus concerns. It is a pandemic sweeping the globe, not just a Pakistan problem. Europe is witnessing so many deaths because there are not enough hospitals to cope with the patient surge,” he added.

The provincial chief executive went on to say that the provincial government is trying to prevent the spread of coronavirus in Balochistan on an emergency basis. “People should stay indoors for ten days in order to safeguard themselves against the deadly virus. The district administration should take strict measures to control price in their districts.”

CM Kamal visited the isolation wards and quarantine centers established in the Divisional Headquarter Hospital. On this occasion, Commissioner Sibi Division Syed Faisal Agha briefed the chief minister on the arrangement of isolation wards and quarantine centers. The doctors and medical staff apprised the CM of their problems and were assured that they will be resolved immediately.

“The government is taking measures to deal with the virus on an emergency basis. This virus is an outbreak that has no cure yet. We need to take precautionary measures to prevent it. The more time you spend in your homes, the more you can avoid the spread of this virus,” he added.

The CM said that precautionary measures will halt the outbreak of coronavirus. “The fact that the disease spreads does not necessarily mean that humans are exposed to it. The entire administration and the health department are working day and night to prevent the virus.”

“We should not wait for the team from Quetta to come to our aid. We have to prepare ourselves,” he said, adding that inflation and hoarding takes place in such situations. “Our people either stock up or raise their prices. We have instructed the Civil Administration to take stern action against profiteering.”

The chief minister added that the time for procurement of wheat has come in all over Pakistan and the Balochistan government has prepared ahead of time. “The government will be ready and will take steps to fix the rates through a mechanism so that the common man will not have to face problems. The provincial government has also set up a fund which will help the people through welfare department. Ration package will be provided at each division level.”