One of its passen­gers also became the eighth fatali­ty nation­ally
By Reuters
Published: March 24, 2020
Tweet Email 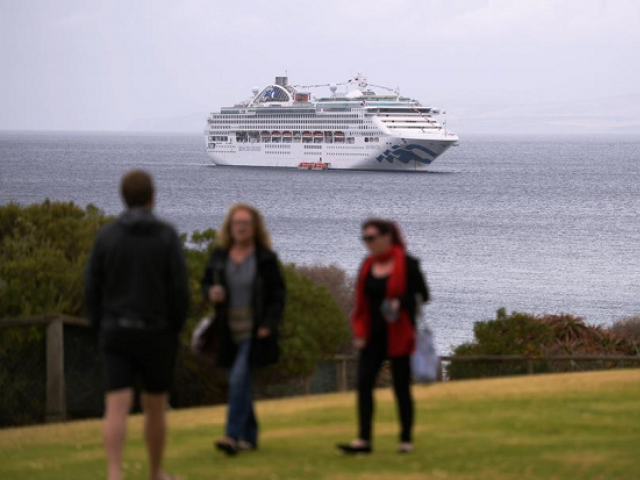 SYDNEY: Australia reported a jump in coronavirus cases on Tuesday that was almost entirely due to passengers who disembarked a cruise ship in Sydney several days ago, prompting widespread criticism of the official response to the pandemic.

The ship, Carnival Corp’s Ruby Princess, became the country’s largest source of coronavirus infections as one of its passengers also became the eighth fatality nationally.

In a chain of events described by New South Wales state Police Minister David Elliott as a “monumental stuff-up”, about 2,700 passengers were allowed to leave the ship when it docked in Sydney on March 19.

By Tuesday, around 130 of those passengers had tested positive and officials were frantically hunting down other travelers to test them and track their movements.

Australia stepped closer to a full lockdown on Tuesday, with authorities warning of harsher penalties for anybody violating self-isolation orders as they began to worry that hospitals were starting to feel the strain.

With 1,984 cases, Australia has registered significantly lower rates of coronavirus compared to elsewhere in the world, but the infection rate has quickened in recent days and NSW Premier Gladys Berejiklian said it was now at a “critical stage.”

While schools officially remained open in most of the country, parents were strongly advised to keep their children home, as all other non-essential services, including cinemas, pubs and houses of worship, were closed for the first full day.

“We are ramping up our compliance,” she told reporters in Sydney. “There are harsh penalties and we’ll enforce that. We have to take this seriously.”

Carnival Corp said it was “profoundly sorry” to learn that the Princess Ruby passenger, a woman in her 70s, had died.

“This sad development underlines the challenges we are all facing as a community in the battle against the impact of COVID-19,” the company said in an emailed statement.

Authorities had initially classified the ship as low risk because it was returning from an 11-day round trip to New Zealand, despite around a dozen passengers showing signs of ill health. About 60% of the passengers were Australian, and 20% were from the United States, ship records showed.

NSW officials said over the weekend allowing the passengers to disembark in Sydney was a “mistake.”

The ship had been rated “medium risk” after its previous cruise, again to New Zealand. On that trip, some 158 passengers registered high temperatures. Nine were tested on arrival in Sydney on March 8 and were allowed to disembark before passengers for the most recent cruise embarked later the same day. A couple from the prior cruise who flew on to Darwin later tested positive for COVID-19.

As the Princess Ruby case numbers rose, officials denied passengers on the Swiss-owned MSC Magnifica cruise permission to disembark on the country’s west coast, despite MSC Cruises assurances that none showed any signs of a respiratory or flu-like illness.

Australia’s move to a stricter lockdown was beginning to show visible signs of social stress with long queues forming outside offices of the main welfare agency across the country.

Westpac economists said that the extraordinary measures in place to counter the spread of the disease would push the unemployment rate above 11%, which would be the highest since the country was last in recession in the early 1990s.

For many, there has been anger over mixed messages from officials in Australia’s system of federal and state governments, which are separately responsible for regulating different services.

The operation of schools has been a flashpoint, with Prime Minister Scott Morrison advising they remained open and safe for students to attend, while some state leaders urged parents to keep their children home.

“It is as clear as mud and no wonder parents are confused out there,” Anthony Albanese, the leader of the federal opposition party, told ABC Radio.

Morrison was due to meet with the national cabinet formed to deal with the crisis, comprising state and federal political and health officials, later on Tuesday to discuss the next steps.