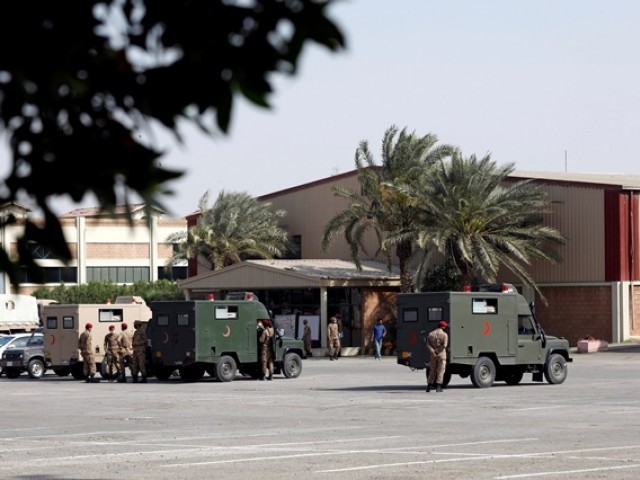 Military officers stand near parked ambulances at the premises of the Expo Center, after government declared it a mass isolation center and field hospital following an outbreak of the coronavirus disease (COVID-19), in Karachi.PHOTO/FILE REUTERS

ISLAMABAD: The country on Monday finally went into the lockdown mode in order to contain the spread of novel coronavirus as the army was called in to support the civil administration in the four provinces as well as Azad Jammu and Kashmir to ensure people stay at home.

Sindh had already announced a complete lockdown a day earlier. On Monday, Punjab, Khyber-Pakhtunkhwa, Balochistan as well as Gilgilt-Baltistan and AJK followed suit.

He said the troops were being deployed in aid of the civil administration as the interior ministry requisitioned the army under Article 245 of the Constitution.

It was important to note that a day earlier Prime Minister Imran Khan was reluctant to go for the lockdown, fearing that such a move could lead to chaos and deprive millions of daily-wage workers of their livelihoods.

But the press conference of Director General of the Inter-Services Public Relations (ISPR) made it clear that there was no option left but to go for the lockdown in a bid to control the spread of the virus.

“It is time to take difficult decisions at individual, family, community and societal levels,” Gen Babar said in a prepared statement. He said corps commanders held a special conference on Sunday evening through video link to discuss the plan of action to help civil administration in the wake of coronavirus outbreak.

He said army chief General Qamar Javed Bajwa, despite army’s deployment both along the western and eastern borders, decided to spare troops and medical resources to fight the pandemic.

As per the measures announced by the federal and provincial governments, hospitals, medical stores, grocery shops and food-making factories would only be allowed to remain open, the DG ISPR said. “All schools will remain closed and gatherings will remain banned,” he added.

Other steps include closure of shopping malls, restaurants, cinemas, wedding halls, while unnecessary movement of people will not be allowed.

Intercity transport will only be allowed for supply of food and other essential items, while public transport in cities will remain shut. All international flights would also remain suspended till April 4.

Vegetable markets and petrol stations would open on specific days to be determined by the respective provinces. For this purpose, provincial governments would issue guidelines which would be implemented by the army with the help of civil administrations.

The chief military spokesperson said all borders had been shut but the real border was now between the humans and the coronavirus, which he said Pakistan had to contain. “Individual discipline and mutual cooperation will help efforts of all the institutions,” he stressed.

He noted that the best defence against coronavirus was not isolation but cooperation. “The task at hand is enormous and difficult.”

The DG, nevertheless, said whether during the 2005 earthquake or 2010 floods or the fight against terrorism, Pakistan had shown it was a resilient nation. He, however, admitted the challenge posed by coronavirus was of a different nature, “the likes of which we have not seen in our lifetime.”

He said the armed forces stood side by side with the entire nation in this difficult hour. “Keeping in view the world’s best practices, limiting the movement of people is the only effective way to deal with the coronavirus.”

“But at the same time, screening, testing and contact tracing are also important,” he said, adding the army along with other institutions would ensure that procedure was followed at all entry points. He said over 1 million people had so far been screened – 12,000 screen tests in last 24 hours alone.

Gen Babar said that he had no doubt that people of Pakistan along with the armed forces would overcome this challenge.

He said the army chief had decided to donate his one-month salary for the emergency fund being created for the coronavirus. Similarly officers from Brig to Lt-general rank would donate their three-day of salary, officers of colonel rank two-day salary, while the rest would contribute one-day salary.

He appealed to the public to take care of their families, particularly the elders and follow the advice being given by the health experts.

At the start of his briefing, he congratulated the nation on the Pakistan Day and paid tribute to the country’s founding fathers. He also said it was important not to forget the people of Kashmir, who had been fighting this pandemic despite the state oppression by India.

“The struggle of people of occupied Kashmir will succeed one day.”