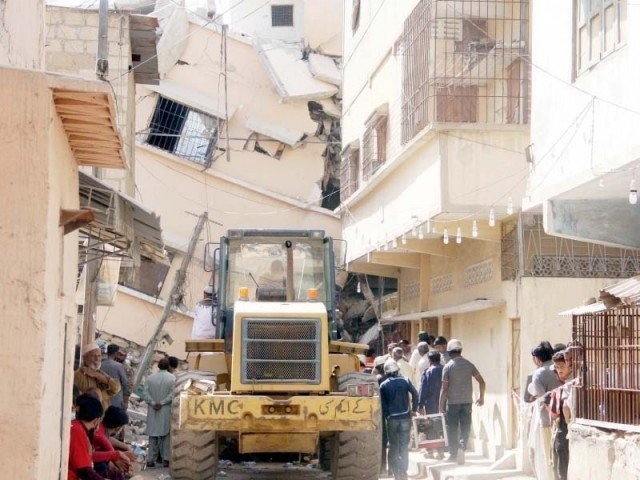 KARACHI: Rizvia police claimed on Wednesday to have arrested three officials of the Sindh Building Control Authority (SBCA) as part of the investigation into the collapse of the five-storey building in Rizvia Society last week. At least 27 bodies were retrieved from the rubble during a four-day rescue operation, while several others were injured in the incident.

An FIR, citing negligence, damage to private and public property and deaths due to the incident, was previously registered against the building’s owner at the Rizvia police station on behalf of the government. The owner, Javed Khan, is currently on the run.

According to the FIR, Khan, had committed criminal negligence in the construction of the building, due to which the structure had collapsed. It further stated that the building was constructed in violation of regulations, pinning blame on various government officials.

Early on Wednesday morning, the residents of the fallen building called off the sit-in they had been staging on Nawaz Siddiq Ali Khan Road.

Claiming that Khan had fled with the help of police officials, the protesters demanded that he should be arrested and publicly hanged for murdering 27 people, while the affected families should be compensated for their loss and provided accommodation. They also demanded that the illegal buildings present or being constructed in the area be razed, to prevent any further loss of life.

The demonstrators further complained that no government officials came to their aid after the incident. One of them claimed that Sindh Chief Minister Syed Murad Ali Shah, who was always present at inauguration ceremonies, did not visit them in their time of difficulty, while those who came left after holding photo sessions.

Pointing to the recent blaze that engulfed shanties under Teen Hatti Bridge, the residents said that those affected by the fire had been given accommodation, clothes and other assistance but no help had yet been given to those who survived the building collapse. “People in the area are letting us stay with them, but how long can they bear this burden?” asked one of the protesters.

Covid-19: PSL matches in Karachi to be played in empty stadium