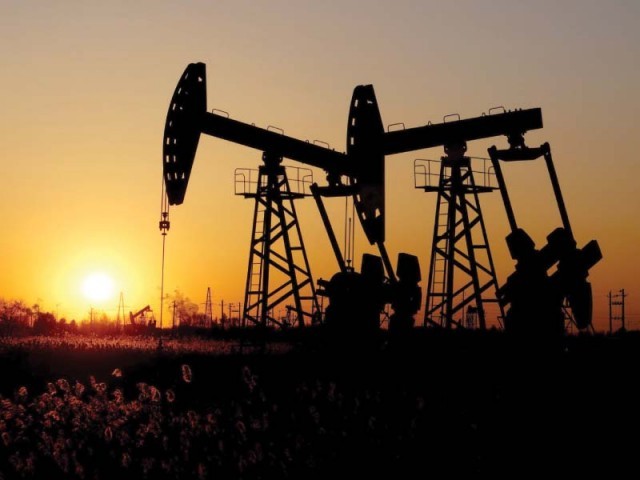 Experts say the decline in oil prices is positive for power, cement, oil marketing, auto, steel and refining sectors while it is neutral for textile and insurance industries. PHOTO: FILE

ISLAMABAD: Pakistan should take advantage of the ongoing tussle between Saudi Arabia and Russia, which caused the oil price crash a couple of days ago, and strike deals for import of the commodity at discounted prices in order to ease pressure on the foreign exchange reserves.

Pakistan also had the option of securing ‘forward buying’ contracts with oil suppliers to benefit from the plunge in crude prices, said industry sources, adding that it depended on how long the current oil market trend continued.

Oil prices tanked around 30% on Monday as Asian markets opened with a massive loss. Main crude benchmarks – Brent and WTI – traded below $33 per barrel amid fears of an all-out price war due to the collapse of an output cut deal between Russia and the Organisation of the Petroleum Exporting Countries (OPEC).

Arab Light crude fell 34.1% to $33.7 per barrel when trading began due to Saudi Arabia’s decision to drastically increase its supply with a significant discount for April.

Worst slump in oil – a boon for Pakistan

Despite a near 6% recovery in oil prices on Tuesday, energy companies with higher drilling costs continued to suffer. Experts were of the view that Russia was not fighting with Saudi Arabia but the US as the latter had imposed sanctions on several Russian companies.

The oil production cost of Saudi Arabia and Russia, and even Iran, is low compared to shale oil producers of the US. Industry experts said Saudi Arabia, Russia and Iran could survive the current oil price war. However, it may lead to default by several energy companies of the US, Canada and other western countries due to lower oil prices, they added.

Oil Companies Advisory Committee (OCAC) former CEO Ilyas Fazil said it was an ideal time to buy additional crude for storage across the country. Oil and Gas Regulatory Authority (Ogra)’s former member oil added that Pakistan should talk to countries like Russia, which was looking for markets, to import oil at a discount. He pointed out that Pakistan depended on the import of crude oil to feed refineries and therefore it was an ideal time to strike deals for crude oil import.

“If it is not immediately possible, then we must create strategic crude stocks on a war footing to benefit from the situation. India, I believe, has such a storage,” Fazil added.

Experts say the decline in oil prices is positive for power, cement, oil marketing, auto, steel and refining sectors while it is neutral for textile and insurance industries.

“We believe this drop in oil prices is unsustainable given large supply rationalisation that will occur in the US and among other NOPEC (No Oil Producing and Exporting Cartel) producers, and any revision in policies by Saudi Arabia or Russia,” an analyst said.

Oil prices have plunged by nearly a third after Saudi Arabia announced that it would offer significant discounts in April and pledged to release blocked supply into a market that is already reeling from falling demand.

Saudi Arabia’s move came in the wake of Russia’s hesitation to make further steep output cuts as proposed by OPEC to stabilise oil prices, hit by prospects of a slowing global economy due to the spread of coronavirus.

On Tuesday, Brent was trading around $36 per barrel. Meanwhile, Arab Light, which is more relevant to Pakistan’s economy, was down 34.1% to $33.7 per barrel.

The drop in Arab Light prices had been the largest since 1991. The decline in oil prices has a direct bearing on inflation and current account deficit.

“We estimate that a $10/bbl fall in oil prices reduces the current account deficit by $2.4 billion. And a reduction in petrol and diesel prices by 10% will reduce the Consumer Price Index (CPI) by 0.3%,” said Foundation Securities’ analyst Muhammad Awais Ashraf.

“If we reduce our oil price assumption to $35/bbl from the current $65/bbl, the total impact from the reduction in current account deficit and remittances (54% are from the Gulf Cooperation Council) is estimated to be positive by around $5-6 billion per year,” he added.

Ashraf said if the oil prices remained at these levels, it would build the case for a policy rate cut in the monetary policy announcement next week.

However, oil and gas exploration companies in Pakistan are set to face a setback from the dip in oil prices.

In terms of profitability, Pakistan Petroleum (PPL) would be the most sensitive, followed by Pakistan Oilfields (POL) and Oil and Gas Development Company (OGDC). Mari Petroleum would be the least affected given its reliance on gas.

On the flip side, it would be positive for the highly leveraged and growth-sensitive sectors like cement, oil marketing companies, automobiles, refineries and steel.

Cement would benefit from the lower energy cost and drop in finance cost. OMC/refineries are the prime beneficiaries as lower oil prices would reduce the working capital requirement. The power sector is expected to benefit from a reduction in the circular debt and lower interest cost.