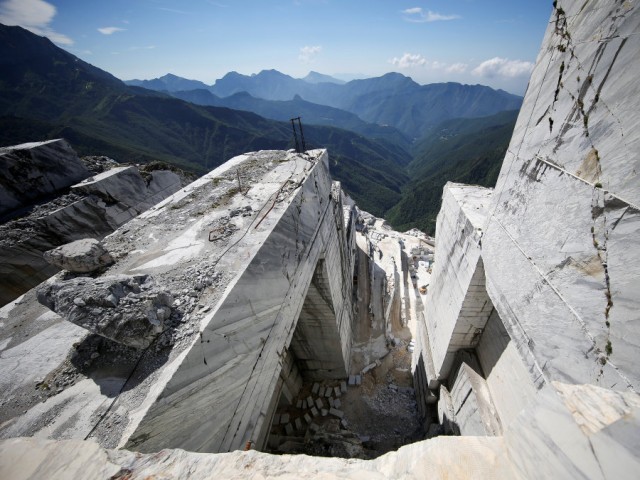 Representational image of a marble mine. PHOTO: REUTERS

ISLAMABAD: Marble is one of the major industrial elements found in abundance in mountainous regions of the country in different colours and shapes.  It is not only used locally after being transported and refined in small and large scale industries but also exported to earn foreign exchange.

The provinces of Balochistan and Khyber Pakhtunkhwa have rich marble reserves for local as well as international market.

Balochistan has marble deposits in Loralai, Lasbela and Chagai districts while Malakand and Mardan in Khyber Pakhtunkhwa (K-P) province have rich deposits of grey and camel marble stones.

The marble found in the newly merged districts- Orakzai and Kurram of Federally Administered Tribal Areas (FATA) in K-P, have some of the unique designs making them prominent face of the marble industry in the country.  White marble due to its distinguished quality of being heat resistant is used in buildings to keep them cooler in hot weather.

Gulf and Middle Eastern States are some of the top international importers of marble from Pakistan.  Turkmenistan is globally known as one of the biggest consumers and importers of white marble for construction of buildings.

Talking to APP, Mohammad Yaseen, a marble refinery owner in Dhera Sanda Pasrur, said most of the marble in Punjab comes from Balochistan and K-P which is refined in Lahore, Gujranwala and Potohar region.

He said the product was bought in raw form and cut in different shapes and then polished for sale in local and export markets. Different kinds of marble named Boti sena, grey and camel marble are available across  the country in abundance at a cheap price while the red-lined and black gold marble are rare and expensive due to their export demand, he added.

Mohammmad Yousaf Ali, Spokesman and Marketing Manager of Stone World said Pakistan was still using dynamites for the extraction of marble from mountains which was risky and an obsolete method as about forty percent of the raw marble was being wasted in the mining process.

He said in the modern and developed world, the mining of marble was carried out through wire cutting and block cutting. He said modern extraction machineries save maximum amount of raw marble and the method is also safe for the labour.

Ali said the machinery required for the modern mining is expensive and is not easily available to the sectors involved in mining of marble.

“The government and the authorities concerned should focus on making a policy for the provision of safe and better extraction process of the marble,” he urged, adding that they should also provide modern technical instruments to the industry on subsidised rates to unlock the sector’s potential.