Sharif family says she wanted to be with her son during treatm­ent despit­e air travel being diffic­ult for her
By Rameez Khan
Published: February 15, 2020
Tweet Email 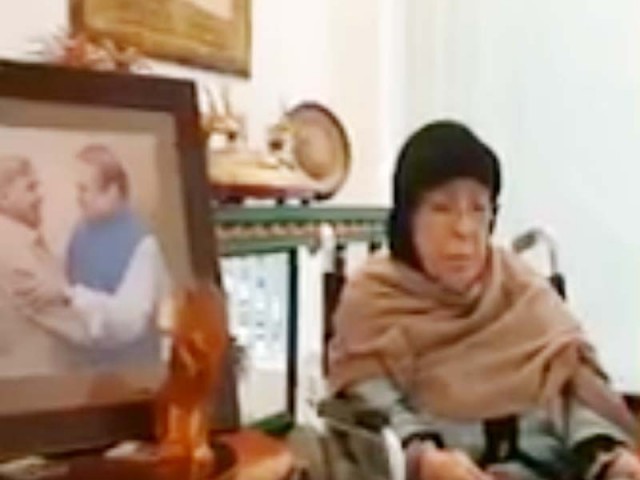 According to the Sharif family air travel was difficult for Begum Shamim Akhtar, since she is almost 90 years old and unwell, but she wanted to be there with Nawaz during his treatment. EXPRESS NEWS SCREEN GRAB

LAHORE: Former premier Nawaz Sharif’s nonagenarian mother is scheduled to leave for London on Saturday as she wishes to be present during the PML-N supremo’s cardiac intervention.

According to the Sharif family, air travel was difficult for Begum Shamim Akhtar, as she is almost 90 years old and unwell, but “she wanted to be with Nawaz during his treatment”.

This development is being played up within PML-N circles to further put pressure on the Pakistan Tehreek-e-Insaf government, as the political party also wants permission for Nawaz’s daughter, Maryam Nawaz, to travel abroad to be with her father.

PML-N President Shehbaz Sharif recently revealed that doctors have declared an ’emergency’ and would be performing an angiography on the former prime minister soon.

After seeing the medical certificate, the accountability court judge exempted the former premier from appearing before the court and adjourned the hearing till February 28.

A two-member bench headed by Justice Tariq Abbasi was hearing the petition earlier.

The new division bench, constituted by LHC Chief Justice Mamoon Rashid Sheikh, will be presided by Justice Ali Baqar Najafi who had earlier heard this case. The second member of this bench will be Justice Tariq Saleem Shaikh.

Justice Ali Baqar Najafi had earlier been a part of the bench which was hearing Maryam’s petition requesting to remove her name from the Exit Control List (ECL), but the bench was also dissolved.

No substantial development occurred in the proceedings when the new bench, headed by Justice Tariq Abbasi, was formed.

Maryam was arrested by NAB on August 8, 2019, in a case regarding suspect business transactions at the Chaudhry Sugar Mills where she is a major shareholder.

On November 4, she was granted bail by the LHC which ordered her to furnish two surety bonds worth Rs20 million, and deposit an additional Rs70million and surrender her passport to secure her release.

In her petition, Maryam said that her father’s health was critical and she was under unexplainable stress because of her inability to be with him at a time when he needs extra care. She said her father is dependent on her.

She also mentioned the death of her mother, Kulsoom Nawaz, who passed away in London last year, while she accompanied her father who returned to Pakistan to serve a sentence, awarded by an accountability court in a NAB reference.