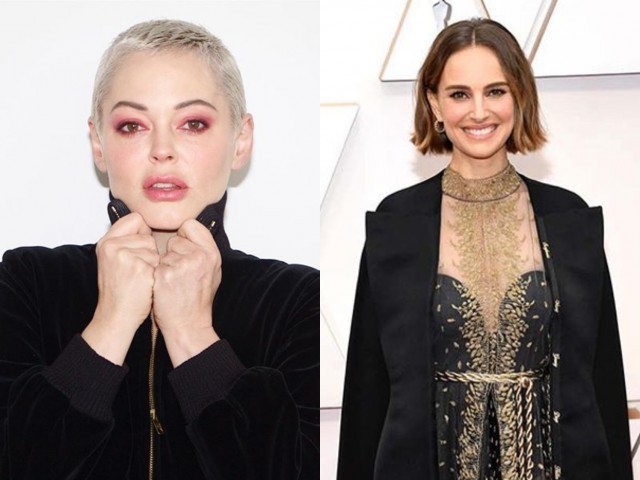 Actor Rose McGowan has come out to slam Natalie Portman’s Oscars dress that generated a ton of buzz for its activism, reported E! News.

Portman attended the Oscars in a dress that featured a cape embroidered with the names of female directors snubbed by the Academy.

Unlike many others who initially lauded Portman for highlighting the snubbed female directors, McGowan, who has testified against Harvey Weinstein, took to Facebook to share her two cents.

“Some thoughts on Natalie Portman and her Oscar ‘protest’,” she started. “The kind of protest that gets rave reviews from the mainstream media for its bravery. Brave? No, not by a long shot. More like an actress acting the part of someone who cares. As so many of them do,” she continued.

She also mentioned that she finds Portman’s “type of activism deeply offensive to those of us who actually do the work.”

McGowan did not mince her words any further, continuing to write,I’m not writing this out of bitterness, I am writing out of disgust. I just want her and other actresses to walk the walk. Natalie, you have worked with two female directors in your very long career- one of them was you. You have a production company that has hired exactly one female director- you.”

I’m preparing for the smear campaign to begin again. If you start reading horrible things about me on Instagram, Twitter or FB, understand that they are likely bots being paid for to damage my reputation. If you start reading sites that trash me, know where it’s coming from, an indicted rapist and his fixers. Stay with me. Believe me. I tell the truth to power, I’ve done it my whole life. I’m not perfect, but I know I am a good person who fights for the voiceless. If it’s happening to me, it can happen to you. Here’s to justice, yours and mine #RoseArmy @#Brave

She went on to clear why she has chosen to single out Portman. “I am singling you out because you are the latest in a long line of actresses who are acting the part of a woman who cares about other women. Actresses who supposedly stand for women, but in reality do not do much at all,” she said.

“Of course women in the world will keep buying the perfumes you promote, the movies you make, and think they’re buying into who you are. But who are you?” she questioned directly.

“There is no law that says you need to hire women, work with women, or support women. By all means, you do you. But I am saying stop pretending you’re some kind of champion for anything other than yourself. As for me, I’ll be over here raising my voice and fighting for change without any compensation. That is activism,” she concluded.

In a final mic-drop moment, she wrote, “Until you and your fellow actresses get real, do us all a favor and hang up your embroidered activist cloak, it doesn’t hang right.”

Boom. L. A. county just INDICTED WEINSTEIN. Welcome to your next life. May you have just as much fun as I and others have had with you destroying our lives, our careers, our health, our self-worth, our reputation. Sometimes karma on earth does happen in our lifetime! This one is for all of us survivors out there in world! We can do this! Use that megaphone! #RoseArmy

Portman responded to McGowan in a statement issues to E! News.

“I agree with Ms. McGowan that it is inaccurate to call me ‘brave’ for wearing a garment with women’s names on it. Brave is a term I more strongly associate with actions like those of the women who have been testifying against Harvey Weinstein the last few weeks, under incredible pressure,” she said.

She continued saying, “It is true I’ve only made a few films with women. I’ve made shorts, commercials, music videos and features with Marya Cohen, Mira Nair, Rebecca Zlotowski, Anna Rose Holmer, Sofia Coppola, Shirin Neshat and myself. Unfortunately, the unmade films I have tried to make are a ghost history.”

“Female films have been incredibly hard to get made at studios, or to get independently financed. If these films do get made, women face enormous challenges during the making of them,” highlighted Portman.

“I have had the experience a few times of helping get female directors hired on projects which they were then forced out of because of the conditions they faced at work. After they are made, female-directed films face difficulty getting into festivals, getting distribution and getting accolades because of the gatekeepers at every level.”

“So I want to say, I have tried, and I will keep trying. While I have not yet been successful, I am hopeful that we are stepping into a new day,” concluded Portman.

Javed Akhtar, Mahesh Bhatt call Modi a ‘fascist’ for his hatred towards Muslims