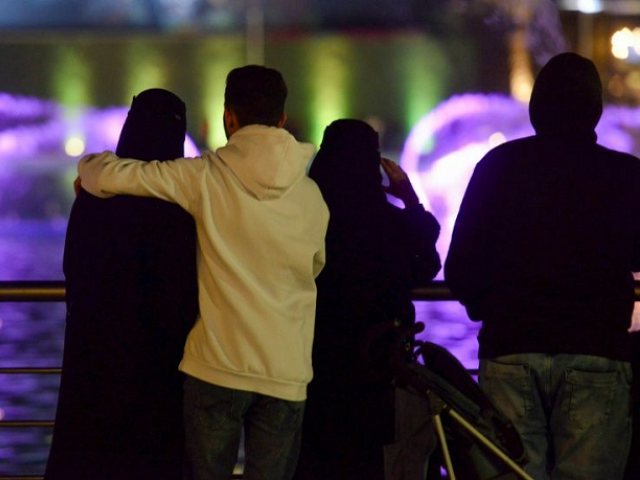 RIYADH: In Saudi Arabia’s rigid past, religious police once swooped down on rose sellers and anyone peddling red paraphernalia around Valentine’s Day, but now a more open – albeit risky – dating culture is taking root.

Pursuing relationships outside of marriage in the conservative Islamic kingdom once amounted to a death wish, and would-be Romeos resorted to pressing phone numbers up against their car window in hope of making contact with women.

Now a sweeping liberalisation drive – which has rendered the religious police toothless and allowed gender mixing like never before – has made it easier for young couples to meet in cafes and restaurants.

Well-heeled millennials also hunt for romantic liaisons via Twitter and Snapchat, and apps such as Swarm – designed to log places the user visits but often repurposed to look for dates.

“Selling red roses was like selling drugs,” one young Saudi filmmaker told AFP, sitting in a music-filled Riyadh cafe with his girlfriend while a courting couple gazed into each other’s eyes on the next table.

“Even this was once unthinkable – a woman sitting next to an unrelated man,” said the girlfriend, a media professional.

“Now women are asking men out.”

Pre-marital relationships remain a cultural minefield though in a country steeped in Islamic tradition and where matchmaking is typically overseen by family elders, forcing couples to keep the unsanctioned romance under wraps.

Covert dating operations illustrate how Saudi Arabia’s mainly young population is often compelled to lead dual lives in the pursuit of social liberties that may outstrip the kingdom’s capacity for change.

Samirah, a 27-year-old finance executive in the Saudi capital, felt a flutter of nerves when her boyfriend’s mother stumbled upon a handwritten birthday card and gift she gave him – and that risked her own family finding out.

In a society where family honour is often tied to female chastity, the revelation would have provoked fury from her family and jeopardised their months-long courtship that began through common friends.

Her boyfriend managed to deflect his mother, but the scare prompted the young couple yearning for more freedom to plan a forbidden rendezvous – a long weekend in Dubai disguised as a business trip.

“Saudi society is more open, but everyone lies about relationships because people are judgemental,” said Samirah, who like other interviewees requested that her real name be withheld.

Crown Prince Mohammed bin Salman, the millennial heir to the Saudi throne, has loosened social norms in a seismic cultural shift away from hardline Islam, allowing cinemas and parties while reining in clerics opposed to events like Valentine’s Day.

In scenes unimaginable until just two years ago, women have been seen swaying on the shoulders of men at music concerts as the kingdom tears down the walls of sex segregation.

But while the religious police have stepped back, the internal policing within Saudi families and society at large has not stopped, highlighting the limits of a Western-style liberalisation drive in a deeply conservative country.

A Saudi woman in her late 20s told AFP she suspected her “control freak” brother, who works in the military, had deployed official spyware to track whether she was meeting men.

“Young Saudis are caught between the old and new,” said Nour, another woman who works in social development.

“Many suffer from the Madonna-whore complex. Just because you are willing to go on a date does not mean you have a loose character.”

Saudi women also bridle at pervasive sexism in a society that – despite undergoing change particularly in urban areas – some say reduces them to their future role as wives and mothers.

Sex outside of marriage remains a criminal offence in most of the Arab world, and the restrictions also fuel the risk of blackmail.

“It is a big concern if you break up on bad terms,” said Samirah.

“Women live in terror: What if he recorded photos and videos of me? What if he tells my father? What if he lands up at home?”

Modern romance is also perilous for men – getting a hotel room can cause huge anxiety as couples are often expected to prove they are married at check-in.

Nasser, a 25-year-old advertising professional, said last year one of his friends was caught kissing his girlfriend inside a private booth in a Riyadh restaurant.

The restaurant manager threw open the screens and started filming them while shouting: “This is haram!” or un-Islamic.

“Sometimes the only safe place to date is in your car,” Nasser told AFP.

“Dating is full of risks.”