The winner will face Novak Djokov­ic, after the Serb ousted an ailing Roger Federe­r to reach his eighth Melbou­rne final
By AFP
Published: January 31, 2020
Tweet Email 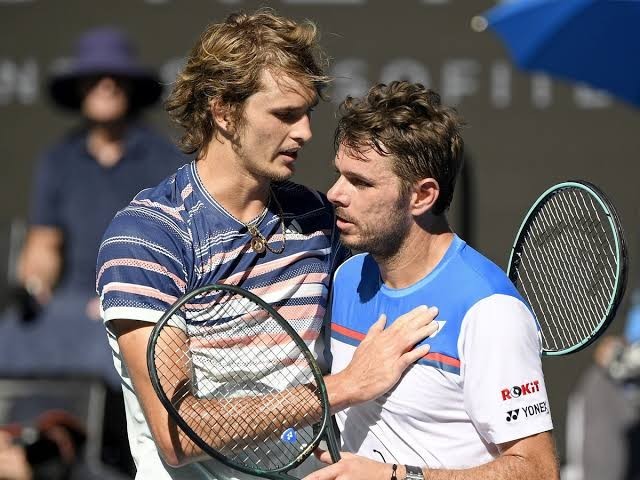 The winner will face Novak Djokovic, after the Serb ousted an ailing Roger Federer to reach his eighth Melbourne final. PHOTO: AFP

MELBOURNE: Dominic Thiem and Alexander Zverev will vie to reach their first Australian Open final on Friday after shocking the old guard to reach the Melbourne semis.

Austria’s Thiem, 26, beat world number one Rafael Nadal in three tight sets, and 22-year-old Zverev of Germany halted 2014 champion Stan Wawrinka as they struck a blow for the younger generation.

The winner will face Novak Djokovic, after the 16-time Grand Slam winner ousted an ailing Roger Federer to reach his eighth Melbourne final — after winning all seven he has played before.

Tennis’s Big Three — Nadal, Federer and Djokovic — have won all but one of the last 14 Australian Open titles, but Thiem and Zverev now have a chance to upset the established order.

Thiem said the close friends know each other’s games inside-out after spending years on the tennis circuit together. The Austrian holds a 6-2 advantage in their head-to-head.

“We have no secrets from each other. I mean, we played so many times, also on very special occasions already, at the ATP Finals, semis, French Open quarters,” he said.

“It’s a nice rivalry we have. It’s great that we add an Australian Open semi-finals to this one. Going to be a close match again.”

Thiem is better known as a clay-court specialist and has experience of the big time, making the French Open final over the past two years, beaten each time by Nadal.

Seventh seed Zverev has long been tipped for great things, but until now the 22-year-old has failed to deliver at the Majors.

He is into his first Grand Slam semi-final after taking a more relaxed approach, admitting that in the past he was trying too hard to make his mark.

“In a way, I was maybe paying attention to it too much, to the Grand Slams. You know what I mean?” he said.

“The Grand Slams maybe meant too much for me. This year I actually came into the Australian Open with absolutely no expectations.”

Zverev has won admirers by pledging $10,000 per win to Australia’s bushfire relief fund — but he’ll go further if he wins the final, promising to hand over the Aus$4.12 million ($2.83 million) winner’s cheque.

“Four million Australian dollars would be nice. But there’s people that need it… for rebuilding the lives they once knew,” Zverev said.