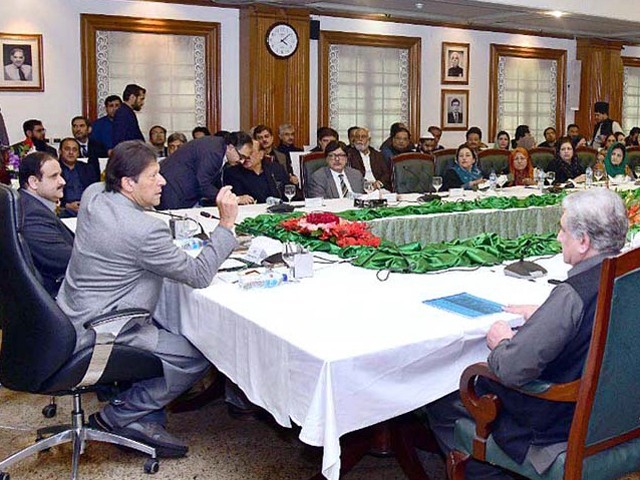 PM Imran chairs a meeting of PTI MNAs from Punjab in Lahore on Sunday. PHOTO: APP

LAHORE/PESHAWAR/QUETTA.: To prevent the ruling coalition from falling apart and quell internal bickering, the ruling Pakistan Tehreek-e-Insaf has ruled out changing the chief ministers of Punjab, Khyber-Pakhtunkhwa and Balochistan — the three provinces where trouble has been brewing — even going to the extent of sacking three ministers in K-P to make the point clear.

In Punjab where the PTI-led government’s survival hinges on the backing of its ally PML-Q, Prime Minister Imran Khan, who is in Lahore to deal with the problem first-hand, categorically told the party’s lawmakers that Usman Buzdar would remain in the saddle despite facing criticism from within the party ranks for “poor governance”.

According to sources, the prime minister has warned the PTI’s Punjab MPAs during a meeting that a new chief minister won’t even last 20 days and would be forced to step down. He also told the MPAs that he knew about the individual who was conspiring against Buzdar. “The conspirator is coveting this slot,” he added.

Buzdar and Punjab Information Minister Fayyaz Ul Hassan Chohan have both denied the existence of a forward bloc or a pressure group within the ruling coalition. However, voices within the party have expressed their concerns over how Buzdar is running the province.

The performance of Buzdar’s government has come under fire from a federal minister, Fawad Chaudhry. During a recent cabinet meeting, the science and technology minister complained that the Punjab government’s “failure to deliver” was damaging the PTI’s reputation.

His criticism of Buzdar drew a fiery response from Chohan, who “advised” him to mind his own business.

Aggravating the ruling party’s problems in Punjab is the disillusionment of the PML-Q, its coalition partner in the province as well as in the Centre. A negotiating team of the ruling party is trying to placate the disgruntled ally.

A notification issued by Provincial Chief Secretary Taj Muhammad read that the governor had exercised his powers under Article 132 read with Clause 1 of Article 105 of the Constitution.

“On their de-notification from their respective offices, they have ceased to hold portfolios of provincial ministers with immediate effect.”

Atif was serving as the senior minister for sports, culture and tourism while Tarakzai was the health minister and Ahmad held the revenue and estate portfolio.

The move came amid reports of an escalating power-struggle between Atif and CM Mahmood. The two ruling PTI leaders reportedly had a showdown in a provincial cabinet meeting last week.

However, the reports of confrontation were denied by officials.

According to sources, both Atif and Shahram during the last tenure of the PTI government in K-P had made several attempts to remove then CM Pervez Khattak from his post but could not succeed.

Following the 2018 general elections, they also lobbied for the post of chief minister with Atif emerging as the top candidate. However, Mahmood was nominated as the chief minister after senior leaders Pervez Khattak and Asad Qaiser expressed their reservations over Atif’s name.

Insiders say the trio had stepped up their efforts to destabilise the K-P government, when reports of a forward bloc in the ruling party was coming in from Punjab and Balochistan.

In a bid to unravel their efforts of toppling the government, CM Mahmood reshuffled the portfolio of Shahram and appointed him provincial health minister but it did not help in improving the situation.

Subsequently, the chief minister took up the issue with PM Imran, who ordered the sacking of the conspiring ministers.

The sources also said disciplinary action would be initiated against the sacked ministers and the disgruntled K-P lawmakers who were backing the move to remove CM Mahmood. Show cause notices would be issued to them by their respective district party management.

The sources said that the estranged party lawmakers had summoned their own meeting to decide their future course of action.

Speaking to the media, K-P Information Minister Shaukat Yousafzai said the three ministers were sacked for not following the cabinet’s decisions and creating difficulties. He added that their unacceptable attitude had compelled PM Imran to make the decision of removing them.

In Balochistan, the ruling PTI stepped in to settle internal rifts of its coalition partner, the Balochistan Awami Party (BAP), so that Jam Kamal could continue as the chief minister.

Senate Chairman Sadiq Sanjrani, who belongs to the BAP, announced on Sunday that Kamal would carry on as the CM and there was no rift within the party or the ruling alliance in the province.

Rifts between Kamal and Bizenjo, who both belong to the BAP, had intensified in recent days after the latter filed a privilege motion against the CM in the provincial assembly secretariat.

Sanjrani said Bizenjo has requested a meeting to convey his party’s grievances and the issue has now been resolved.

The Balochistan Assembly speaker, who was present alongside Sanjrani, expressed his gratitude to the party’s leaders for listening to his reservations. “Whenever there is an issue in Pakistan, he [Sanjrani] comes forward to address it,” he added.

Bizenjo hoped that the government team would resolve the problems he had raised. “We must move forward for the betterment of the province.”

Speaking on the occasion, Khattak said there were was nothing unusual about a difference of opinion emerging within a party and if there was an issue, it would be resolved amicably.

Addressing a news conference on Friday, Bizenjo had claimed that he was compelled to speak up for the people of Balochistan because the governance system had completely halted and people did not have access to the Chief Minister’s House.

The speaker also claimed that toppling the government of Jam Kamal was an easy task because he had full support of likeminded members of the BAP and members of opposition parties.