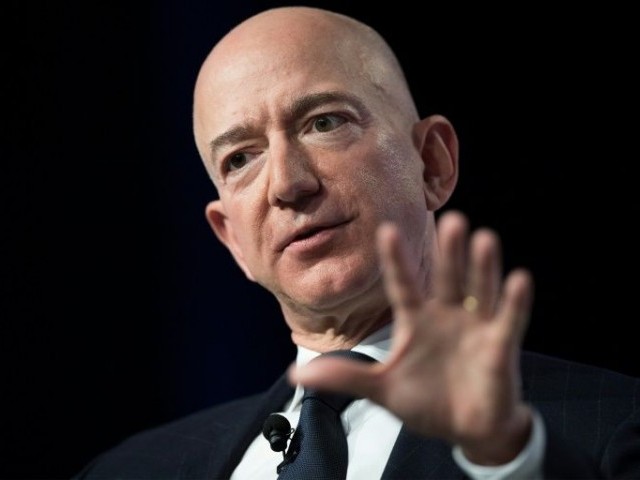 In a post on blogging platform Medium Thursday, Jeff Bezos (seen) said Enquirer publisher American Media Inc (AMI), led by David Pecker, approached him with a threat to publish the photos if he did not halt an investigation into the motives behind that leak. PHOTO: AFP

The technical experts hired by Jeff Bezos, CEO of Amazon concluded “with medium to high confidence that Bezos’ iPhone was compromised via malware sent from a WhatsApp account used by Saudi Crown Prince Mohamed bin Salman,” according to the report by FTI Consulting, first reported by the online news site Vice.

This news caused a frenzy on social media with Pro-Saudi newspapers, government officials and public reacting furiously to the claims that their Crown Prince hacked Bezos smartphone.

“Recent media reports that suggest the Kingdom is behind the hacking of Mr Jeff Bezos’ phone are absurd,” the Saudi Arabian embassy said on its Twitter account.

“Absurd is exactly the right word”

On Thursday the hashtag #قاطعوا_منتجات_امازون (#BoycottAmazonproducts) trended in Saudi Arabia and was used 10,000 times.

The hashtag was initiated by a pro-government account that was trending on number one in Saudi Arabia was later suspended by Twitter.

The public showed their full support to their Crown Price with fifty accounts posted 1,400 of the tweets advocating the #BoycottAmazonproducts.

#قاطعوا_منتجات_امازون#BoycottAmazonproducts #BoycottAmazon
Amazon has a history of racism and inhuman actions all over the world! So it’s not something weird to find out about how its founder is a racist and a tool used by some suspicious politicians!!!! pic.twitter.com/3exAKBpWxT

It’s ridiculous to accuse that, they became really weak, I pity them. https://t.co/w1BLj0ZUnx

He who transgresses, extends, and abuses us or our rulers, he has reaped himself and will regret it.#BoycottAmazonproducts

It’s the time to give them a serious lesson at the economical side.
Red lines means don’t think we couldn’t 🇸🇦💪🏼#4MBS_boycott_Amazon#BoycottAmazonproducts

However, Ben Nimmo, a disinformation analyst, suggests that many of these accounts showcase signs of inauthentic activity.

The 50 most active accounts on the Arabic and English hashtags contributed just over 1,400 tweets, so about 1/6 of all the traffic.

According to an article titled “Jeff Bezos, fleeing from sin using accusation” published by Okaz, a popular newspaper suggests that Bezos’ extramarital affair with Lauren Sanchez, his now girlfriend is the real reason for the alleged accusation.

There is speculation that the Saudi hack is linked to the National Enquirer tabloid’s publishing of Bezos’s intimate texts and photos to his girlfriend in 2019.

This is Bezos’s attempts to distort the Saudi image and The Washington Post which he owns is leading this unfair campaign against Saudi Arabia and their crown prince.