ISLAMABAD: To ensure transparency and promote friendly policing in the federal capital, the Islamabad Police on Thursday formally started using small cameras which are attached to the uniforms of its officers.

The body cams have been pinned to the uniforms of officers who man pickets between Zero Point and Aabpara on the Kashmir Highway.

The cameras were pinned to the chests of officers in a briefing at the Interior Ministry on Thursday with Interior Minister Ijaz Shah and Inspector General of Islamabad Police (IGP) Aamir Zulfiqar present.

Briefing the federal minister, IGP Zulfiqar said that the cameras will capture images and record videos of the interaction between deployed policemen and the public. It will also record occurrences around the officer.

He said that the knowledge that they are being recorded, will help keep all parties in any interaction honest — particularly discouraging corrupt practices — and allow them to gain the confidence of one another. 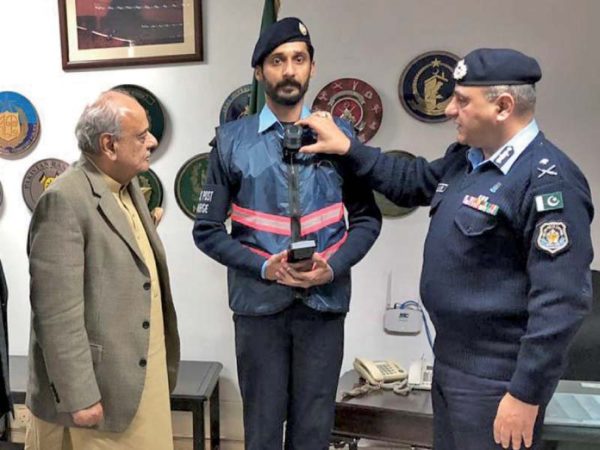 The IGP said that following directions from Prime Minister Imran Khan, the police department had procured 10, night vision capable body cameras, on self-help basis. Five of these were installed on the uniforms of officers on Thursday while the remaining five will be fixed over the next two days.

IGP Zulfiqar went on to say that the cameras will soon be connected with the Safe City Project in the federal capital and hoped that the technology will automatically resolve several complaints about the misconduct of policemen, especially those serving at police pickets.

In the second phase of the project, the police chief said those police officers who patrol the streets of the federal capital and those who are deployed at police stations will wear body cameras.

Meanwhile, the interior ministry on Thursday announced the formal amalgamation of the Rapid Response Force (RRF) and the Criminal Investigations Division (CID) into the Counter-Terrorism Force (CTF).

A notification issued by the interior ministry read that after being approved from Prime Minister Imran Khan, these units of the federal police have been merged.

“Two units of the federal police have now been declared defunct as they will now perform under the umbrella of the CTF,” read the notification.

“The CID and the Rapid Response Force (RRF) will work in collusion under the collective name of ‘counter-terrorism force’ henceforth. DNA