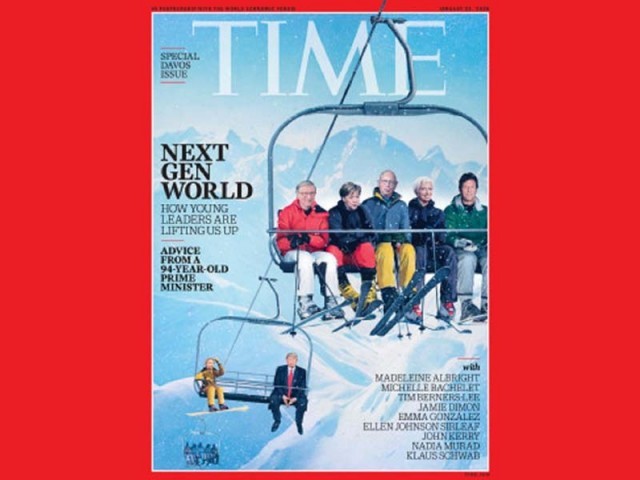 The illustration shows the country's premier on chairlift with Swiss Alps in the background.PHOTO: TIME MAGAZINE

Prime Minister Imran Khan on Monday was on Time Magazine’s cover along with four other world leaders for the publication’s World Economic Forum (WEF) edition.

The annual summit is set to commence in Davos tomorrow for four days.

While US President Donald Trump and climate activist Greta Thunberg can also be seen sitting together on another chairlift in the illustration.

PM Imran will also attend the summit from January 21-23 with the entire trip costing $68,000 to the national exchequer.

PM Imran’s advisers Abdul Razak Dawood and Zulfi Bukhari, as well as, other officials will accompany him to Davos, where he is expected to hold meetings with several world leaders, including US President Trump.

Fifty-three heads of state are on the guest list, including Trump, who is expected to address the gathering on January 21.

The country’s premier will brush shoulders with foreign investors and inform them of investment opportunities Pakistan holds.

This year marks the 50th anniversary of the invitation-only event, which takes place in the Alpine resort town of Davos, amid tight security.

Nearly 3,000 participants from 118 countries are expected to attend the event.