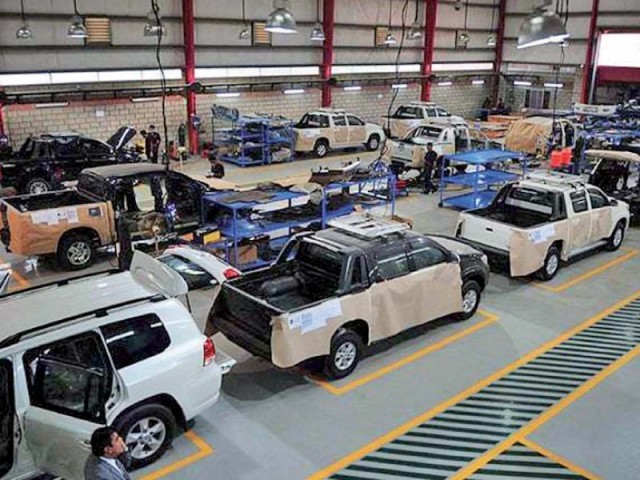 It was for the first time in recent months that the sectors reporting growth outnumbered the ones showing contraction. PHOTO: FILE

ISLAMABAD: The pace of contraction in large businesses slowed down slightly to below 6% in first five months of the current fiscal year but fundamental conditions causing economic slowdown remained unchanged, showed an official report.

The Pakistan Bureau of Statistics (PBS) reported on Friday that large-scale manufacturing (LSM) output decreased 5.93% in July-November of the current fiscal year compared to the same period of previous year. There was negative growth of 6.5% in the July-October period.

However, due to less than 5% contraction in November 2019, the cumulative LSM growth remained negative 5.93% in five months of the current fiscal year over the same period of previous year, according to the PBS.

Large businesses have been facing the brunt of very high interest rate, documentation drive by the Federal Board of Revenue and high energy prices.

In its first quarterly report, the central bank noted that while large export-oriented and import-competing industries remained bullish on fundamentals, they refrained from taking a long-term view.

“This cautious behaviour, coupled with tapering demand and compression of unregistered businesses – which dominate the network of dealership and wholesale infrastructure of registered firms – reinforced the economic slowdown,” it added.

The central bank said a number of industries within LSM struggled with inventory build-ups amid rising input costs.

With gross margins squeezed and financing costs rising, firms scaled back their operations to save their bottom lines from dropping further. As a result, contraction was observed in a majority of LSM sub-sectors in the first quarter.

This trend continued in the second quarter of the current fiscal year as well, although the central bank has not yet officially commented on it.

PBS data showed that out of 15 major industries, eight recorded some growth while the output in seven industries contracted in the July-November period. This was for the first time in recent months that sectors reporting growth outnumbered the ones showing contraction.

Prime Minister Imran Khan won the July 2018 elections on the promise of creating 10 million new jobs and constructing five million houses at affordable prices. A delegation of the Federation of Pakistan Chambers of Commerce and Industry met with the prime minister this week and sought reduction in interest rate and energy prices.

However, the premier expressed his inability to help the industries due to the “ongoing phase of economic stabilisation”.

Data collected by the Oil Companies Advisory Committee (OCAC) showed that 11 types of industries registered on an average 0.8% negative growth in the July-November period of the current fiscal year.

The Ministry of Industries, which monitors 15 industries, reported 3.63% decline in the growth of these industries. Similarly, the provincial bureaus reported 1.5% contraction in 11 industries in first five months of the current fiscal year.

Sectors that posted growth on an annual basis included textile which grew just 0.27%, fertiliser which registered growth of 8% and non-metallic mineral products which recorded 1.9% growth.

The manufacturing of leather products recorded 9.5% growth, engineering products registered an increase of 1.5%, rubber products 2.2%, wood products 55% and paper and board 9.5% in the July-November period.

Industries that were producing eight major types of goods recorded a dip in their manufacturing in July-November 2019. Production of food, beverages and tobacco contracted 6.6%, coke and petroleum products 12.1%, pharmaceuticals 8.4%, chemicals 5.5%, automobiles 37.7%, iron and steel products 13.8% and electronics 16.2%.

Except for automobiles and electronics, the pace of contraction in other five sectors slowed down as compared to October’s reading, sparking hopes that these sectors may revive in the near future.

Current trends suggest that the government will miss its annual growth targets in three major sectors – agriculture, industry and services.