ISLAMABAD: The Supreme Court Registrar has refused to entertain Gen (retd) Pervez Musharraf’s appeal against his conviction and sentencing by the Special Court ruling in the high treason case, The Express Tribune has learnt.

According to sources, the Registrar Office on Friday returned the appeal after raising an objection under Supreme Court Rules 1980 that says a convict has to surrender to the authorities before filing an appeal.

An attorney for the former military confirmed the development, saying that his client an appeal against the Registrar Office’s decision within 30 days. “I’ve already prepared my arguments for this purpose,” Salman Safdar told The Express Tribune.

Interestingly, Musharraf filed the appeal in the apex court even though a three-judge bench of the Lahore High Court (LHC) has already declared unconstitutional the filing of high treason case against him, formation of the Special Court as well as its proceedings, leading to the abolition of the death penalty handed down to him on Dec 17.

The Special Court – comprising judges of three high courts – awarded the sentence with a dissenting note from one judge who said that instead of capital punishment, the former military ruler should have been awarded life imprisonment for imposing emergency rule in Nov 2007.

In his appeal, Musharraf alleged that the treason trial “suffered from interference and external pressures”. He claimed that he had been denied his constitutional right to fair trial, and that Islamabad High Court’s guidelines to ensure a fair trial, were disregarded.

It stated that it was “shocking and unfortunate” that the Special Court abruptly wrapped up the trial that was far from its conclusion. “The recently appointed prosecution team had filed an application for amended charge to include aiders & abettors in the high treason case. The defence team, comprising the state appointed counsel and privately engaged counsel of appellant had filed two applications [Recording of 342 CrPC/6 (d) of the Criminal Law Amendment (Special Court) Act 1976 & Leading Defence Evidence] without entertaining these very crucial applications and completely ignoring section 6 (f), the Special Court retired for tea break and shockingly returned after 45 minutes with decision of guilty (2:1) and award of capital punishment,” it said.

It argued that the Special Court opted to announce the verdict without deciding on four pending applications and hearing on the final submission of parties, saying that this action alone was sufficient to set aside the judgement.

The appeal took strong exception to paragraph 66 of the verdict, maintaining that desecration of a dead body was in contravention to the injunction of Islam, and violated human dignity.

In the paragraph, Justice Waqar Seth, the presiding judge of the Special Court, giving his minority view ruled, “We direct the law enforcement agencies to strive their level best to apprehend the fugitive/convict and to ensure that the punishment is inflicted as per law and if found dead, his corpse be dragged to the D-Chowk, Islamabad, Pakistan and be hanged for 3 days.”

The appeal stated that the prosecution case suffered from an “admitted, noticeable and unexplained delay” of over five years from the date of the alleged offence, which could draw “adverse inferences”.

“…if the alleged offence was so heinous and so apparent, why did the prosecuting agency delay the initiation of the investigation and subsequent trial for such a long period of time. This delay serves to be fatal to the prosecution case as it reeks of malice and unfairness.”

The Pakistan Bar Council, meanwhile, also deliberated upon the LHC decision that declared the proceedings in the high treason case unconstitutional.

The lawyers expressed concern at the LHC decision to take up the matter at such a stage where the right to appeal in the Supreme Court had not been exercised. The council decided to file an appeal before the apex court against the LHC order. 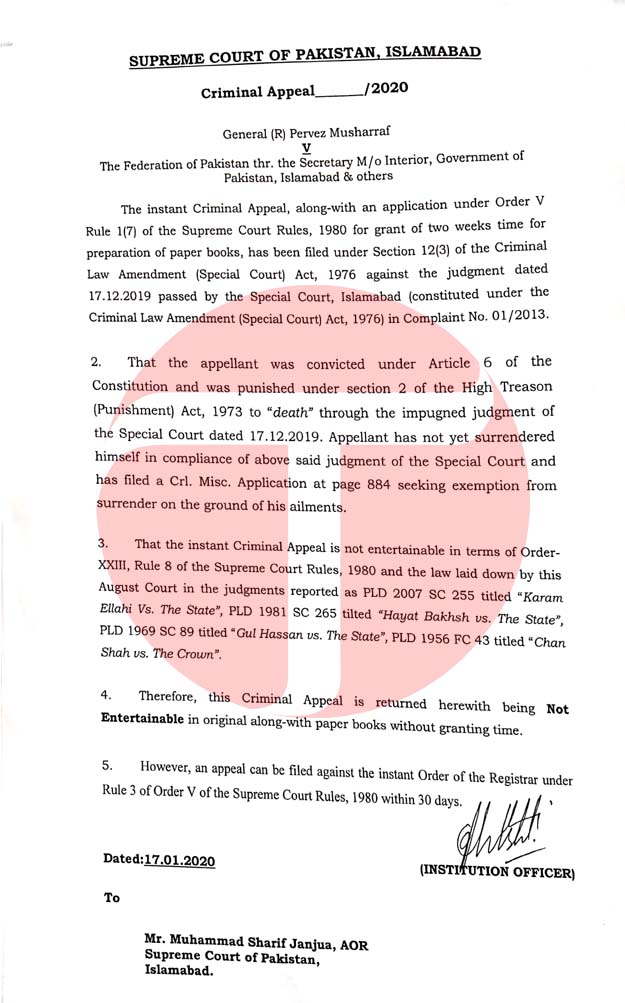