32-year-old centre-forwar­d has played 276 games for the Catala­ns and has racked up a stagge­ring haul of 191 goals
By AFP
Published: January 13, 2020
Tweet Email 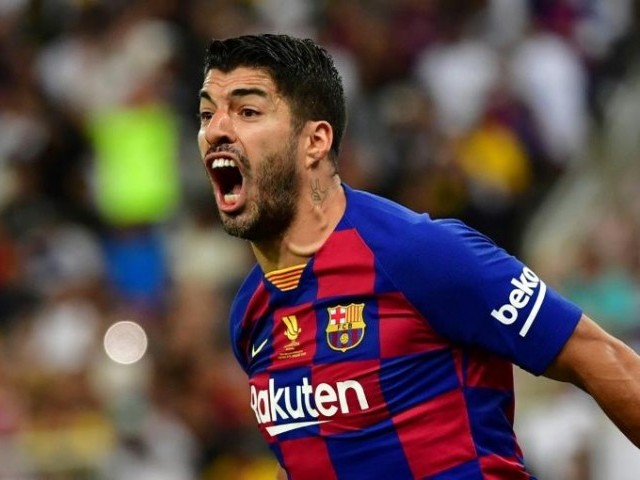 32-year-old centre-forward has played 276 games for the Catalans and has racked up a staggering haul of 191 goals. PHOTO: AFP

MADRID: Barcelona striker Luis Suarez will be out of action for four months after keyhole surgery on his injured right knee, the Spanish champions announced on Sunday.

The 32-year-old centre-forward has scored 14 goals from 23 appearances for Barcelona this season, with the club sitting atop the Spanish league and facing Napoli in the last-16 of the Champions League.

The loss of Suarez will be offset somewhat by the fact Barcelona signed France ace Antoine Griezmann last summer with the World Cup winner starting to find form with the Catalan club.

Barcelona issued a press release saying the surgery on Suarez was for an “injury to the external meniscus of the right knee”.

Suaraz has played 276 games for Barcelona since joining in 2014 and has racked up a staggering haul of 191 goals despite playing second fiddle to six time Ballon d’Or winner Lionel Messi.

It was not a first knee operation for the feared forward who carved out a feisty reputation at both Liverpool and with Uruguay.

Suarez first underwent knee surgery in May 2014, returning in time to score twice against England at the end of June in the World Cup.

‘We made children’s mistakes’, says Messi after Barca stunned by Atletico

Last May, Suarez missed the last two league games and the Spanish cup final, which Barcelona lost to Valencia, so he could have an operation on his right knee and recover in time to play for Uruguay in the Copa America in Brazil.

Suarez played on Thursday as Barcelona lost the semi-final of the Spanish Super Cup to Atletico Madrid in Jeddah.

I want to play in all formats for Pakistan: Haris Rauf