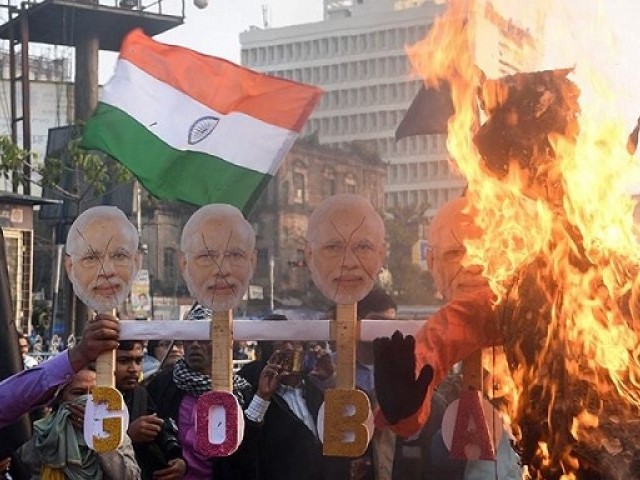 Activists burn masks with the face of India's Prime Minister Narendra Modi at a protest against India's new citizenship law in Kolkata on January 11, 2020. PHOTO: AFP

Amid intense protests across India against the anti-Muslim citizenship law, Prime Minister Narendra Modi was forced to fly in helicopter to reach destination since the vexed protesters on roads made no way for the premier in Kolkata – the capital of West Bengal state.

With Modi’s two days slated visit on Saturday, Kolkata Police made unprecedented efforts to ensure that the premier’s route from the airport to the city was barricaded and closed to protesters, Scroll.in reported on Sunday.

In the end, even that failed, and Modi forcefully had to take a helicopter to travel the 16 kilometre distance.

Later in the day, the prime minister took the boat down the river Hooghly to visit the Ramakrishna Mission in Belur, in order to avoid the protesting masses flooding roads in Kolkata city.

The impressive protest — staged by students mostly — also put pressure on Chief Minister Mamata Banerjee of the Trinamool Congress, who had met Modi earlier in the day, to return to pacify protesters.

Anger has been growing over Citizenship Amendment Act (CAA), approved by parliament on December 11 last year, which gives religious minority members from three neighbouring countries an easier path to citizenship – but not if they are Muslim.

The new law aims to fast-track citizenship for persecuted Hindus, Parsis, Sikhs, Buddhists, Jains and Christians who arrived in India before December 31, 2014 from Muslim-majority Afghanistan, Bangladesh and Pakistan.

Critics say the law discriminates against Muslims and is part of Modi’s Hindu-nationalist agenda, a claim his political party BJP denies.

The story originally appeared on Scroll.in