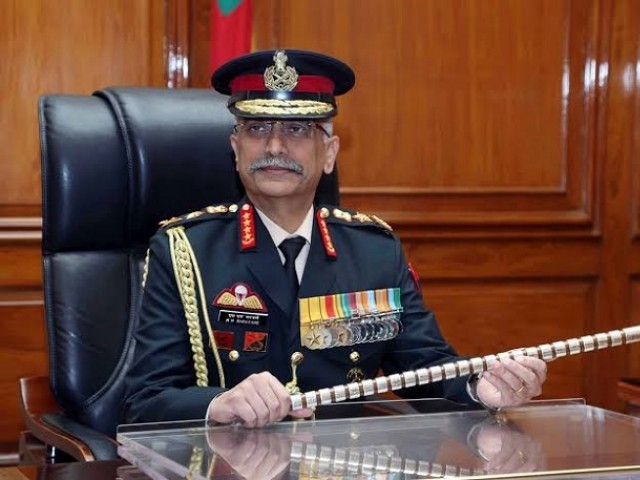 The new Indian army chief, Gen Manoj Mukund Naravane, continued with his belligerent rhetoric on Saturday in his effort to stay in the headlines in India’s jingoistic media.

After threatening to carry out, what he called, “preemptive strikes” in Pakistan earlier this month, Gen Naravane went one step ahead on Saturday and said his force would take steps to take control of Azad Jammu and Kashmir (AJK) if the Indian government gave such an order.

Speaking at a news conference ahead of India’s Army Day on Jan 15, Gen Naravane, who took over as army chief on Dec 31, also warned of possible tie-up between Pakistan and China in Siachen with any link up between the two all-weather friends in the region posing a threat to Ladakh, according to the Indian media.

#WATCH Army Chief on if PoK can be part of India as stated by political leadership: There is a parliamentary resolution that entire J&K is part of India.If Parliament wants it,then,PoK also should belong to us. When we get orders to that effect, we'll take appropriate action pic.twitter.com/P8Rbfwpr2x

He also said India and China would set up a hot line between senior military commanders to ensure better communication to maintain peace and stability along their common borders.

Over 150 days of agony: Kashmiris suffer longest internet blackout ever

Recalling that a 1994 resolution of the Indian parliament had stated that the entire disputed state of Jammu and Kashmir belonged to India, Gen Naravane said: “There is a parliamentary resolution that entire Jammu and Kashmir is part of India. If parliament wants that area (AJK) should be taken we will definitely do so and appropriate action will be taken accordingly.”

The Narendra Modi-led Hindu nationalist government illegally and unconstitutionally revoked the special status of Indian Occupied Jammu and Kashmir (IOJ&K) and put the entire region under siege, which continues to this day. New Delhi also divided the occupied region into two territories directly administered by the central government.

The step, which was aimed at taking IOJ&K off the table of talks with Pakistan, had been taken by the Modi government in frustration after Pakistan successfully revived the decades-old dispute in the UN General Assembly in August.

The Modi government had deployed tens of thousands of troops to the IOJ&K before revoking its special constitutional status and put the region under a curfew in an attempt to keep the anger of the local populace from spilling in the streets.

The move – part of which, internet shutdown to be precise – has been declared illegal by the Indian Supreme Court, while the Modi government has miserably failed to justify its draconian siege of the IOJ&K internationally.

Gen Naravane’s first threat of Balakot-like “preemptive strikes” was laughed off by the Pakistan Army with its chief spokesperson reminding the Indian general of the bitter consequences of the botched air raid.

On Feb 26, 2019, Indian fighter jets had violated Pakistan’s airspace in the dead of the night, but dropped their payloads at an abandoned mountainous region of Balakot while fleeing after Pakistan scrambled its warplanes.

The next morning, Pakistan Air Force delivered a bitter reprisal in the IOJ&K, when its jets carried out air strikes in broad daylight next to Indian military targets deep inside the occupied territory, triggering an air battle in which two Indian fighter aircraft were shot down and the pilot of one them was captured – only to be released later as a “goodwill gesture”.

DG ISPR Maj Gen Asif Ghafoor had said that the new Indian army chief was trying to make himself known by hurling threats at Pakistan. “He might be well aware of Pakistani military’s capabilities. The Pakistani military knows how to defend its motherland – and India knows this too,” he had said in response to Gen Naravane’s threat of “preemptive strikes”.

In Saturday’s news conference, Gen Naravane said the formation of the Chief of Defence Staff (CDS) and creation of department of military affairs was a “very big step” towards integration of the three services.

“The formation of the Chief of Defence Staff (CDS) and creation of department of military affairs is a very big step towards integration and we on our part will make sure that this is a success,” he said.

The post of CDS was created last month with Naravane’s predecessor, Bipin Rawat being named India’s first CDS. One of the missions of the CDS is to promote integration and cohesion in the working of the three services.