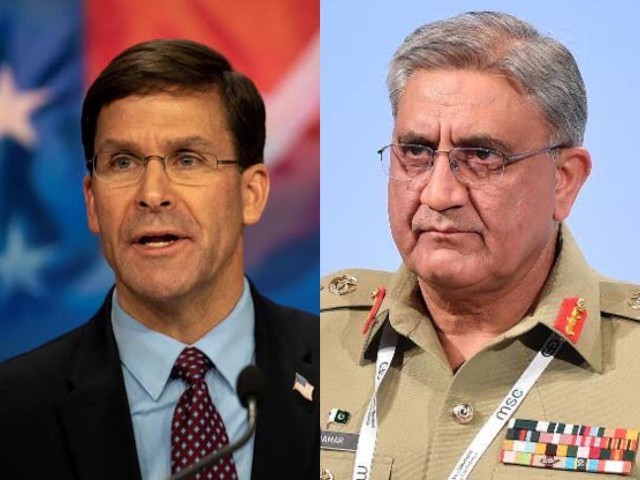 “I always appreciate speaking with our partners and allies in the region,” Esper wrote on his Twitter handle. “We all seek de-escalation of tensions with Iran.”

He added that while Washington did not want conflict, it will “respond forcefully” if required.  “Afghan President Ashraf Ghani and Pakistani General Bajwa both offered sound counsel and advice in calls today,” the US official also said.

The United States does not seek conflict, but will respond forcefully if necessary. Afghan President @ashrafghani and Pakistani General Bajwa both offered sound counsel and advice in calls today.

This is not the first communication between the army chief and top US officials. In a diplomatic outreach following Soleimani’s assassination, US Secretary of State Mike Pompeo telephoned COAS General Bajwa and apprised him on the situation.

According to Maj-Gen Ghafoor, the army chief had emphasised that the regional tensions need to be reduced and urged relevant countries to move forward with practices and dialogue that aid peace process. He also stressed upon the Afghan reconciliation process.

Iran supreme leader says ‘slap in face’ delivered to US

It may be mentioned here that no direct communication between PM Imran and US officials has been reported yet.

With high stakes, Pakistan has been on the fore-front of the push to de-escalate tensions. Citing Prime Minister Imran Khan and the army chief, Director General Inter-Services Public Relations Major General Asif Ghafoor said Islamabad will not allow its soil to be used against anyone and will play its role to secure peace in the region.

Foreign Minister Shah Mehmood Qureshi said that Pakistan will not take sides in the escalating confrontation between neighboring Iran and the United States.

Qureshi said he feared Soleimani’s death could trigger an upsurge in sectarian tensions, including in Afghanistan. “We believe this could have a negative impact on Afghanistan, and that its peace process – where Pakistan has played an important role – could be affected and exploited by the spoilers,” he said.

Soleimani, the second most powerful figure in Iran after Supreme Leader Ayatollah Ali Khamenei, was killed on Friday when missiles fired by a US drone struck his vehicle as he left Baghdad airport.

The death of the commander of Iran’s elite foreign paramilitary and espionage service, known as the Quds Force, has led the region into chaos and brining the world on the brink of world war III.

A 62-year-old general who headed the overseas arm of the Revolutionary Guards, Soleimani was a revered figure in Iran. Many saw him as a hero for his role in defeating the Islamic State militant group.

In the wee hours of Wednesday, Iran launched missile attacks on US-led forces in Iraq in retaliation. Iranian state television said 80 “American terrorists” had been killed and US helicopters and military equipment damaged. It did not provide evidence of how it obtained that information.

Iran’s Supreme Leader Ali Khamenei said the missile attack was a “slap on the face” of the United States and that US troops should leave the region. He was addressing a gathering of Iranians who chanted “Death to America”.

The US military said at least two Iraqi facilities hosting US-led coalition personnel were targeted at about 1:30 a.m. Iraq time (2230 GMT on Tuesday).

Germany, Denmark, Norway and Poland said none of their troops in Iraq were hurt. Britain, which also has personnel in Iraq, condemned the Iranian action. Iraq said its forces did not suffer casualties.

US President Donald Trump insists that he ordered Soleimani’s killing “to stop a war” not to start one. It was unclear how Trump and his aides had overcome earlier objections to such an attack on the grounds that it would risk thrusting the United States into another Middle East war that could engulf the region.

Following Iran’s retaliatory actions, Trump attempted to downplay the missile attacks.  “All is well!” he said in a post on Twitter.

All is well! Missiles launched from Iran at two military bases located in Iraq. Assessment of casualties & damages taking place now. So far, so good! We have the most powerful and well equipped military anywhere in the world, by far! I will be making a statement tomorrow morning.

The world on its edge

In an unprecedented move, Russian President Vladimir Putin made a surprise visit to Damascus to meet Syrian President Bashar al-Assad.

Soleimani, who was one of the key figures in Syria’s war as the architect of Iranian military operations in the Middle East, had just arrived in Iraq from Syria when he was killed by the US drone strike.

Russian and Iranian support has helped Assad win back nearly all the territory lost to rebels who tried to overthrow him during the civil war that began nearly nine years ago.

Putin is due to hold talks on Wednesday with President Tayyip Erdogan in Turkey, which has sent forces into much of northern Syria to beat back Kurdish-led forces that had been backed by the United States.

Meanwhile, German Chancellor Angela Merkel will travel to Russia on January 11 for talks with Putin on the crisis triggered by Trump’s move to kill Soleimani.

China has criticised the United States for aggravating tension in the Middle East through its use of force in the standoff between Washington and Tehran. An editorial on Tuesday in the government-run China Daily blamed the US for creating a “cauldron of tensions” in the region.

(With additional input from Reuters.)