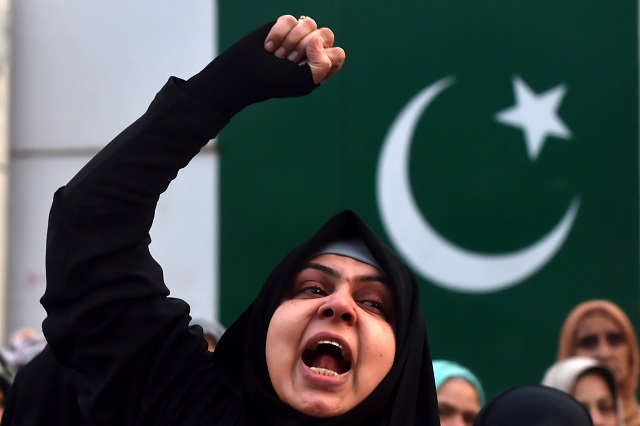 A protester shouts slogans against the United States during a demonstration following a US airstrike that killed top Iranian commander Qasem Soleimani in Iraq, in Lahore on January 3, 2020. PHOTO: AFP

ISLAMABAD: Lawmakers in the upper house of parliament on Friday feared that the escalation of tensions between Washington and Tehran following the killing of Iranian commander Major-General Qassem Soleimani in a US airstrike in Baghdad could also adversely affect Pakistan.

“The foreign minister should come to the House to make a policy statement [on the escalating US-Iran tensions] and also inform us what Islamabad’s stance would be on the matter,” Senator Raza Rabbani of the PPP demanded while speaking on the floor of the Senate.

Leader of the Opposition in the House, PML-N’s Raja Zafarul Haq, said it was necessary for the foreign minister to come to the Senate and take the lawmakers into confidence over the situation in the Middle East.

Senate Chairman Sadiq Sanjrani directed the Leader of the House, Shibli Faraz, to convey the message to the foreign minister.
In the absence of the foreign minister, Faraz briefed the lawmakers on the US-Iran tensions, saying that the government was closely monitoring the situation.

“We are also taking stock of global reaction to the development and will soon present a report in the House,” he added.

Haq, Rabbani and Senator Dilawar Khan also demanded action against a bureaucrat for misbehaving with Senator Aurangzeb Khan.
The chairman issued direction to the Establishment Division secretary to issue the bureaucrat’s suspension order on Monday. He also directed the Khyber-Pakhtunkhwa police chief to file a case against the bureaucrat for threatening the senator.

Speaking on the issue of Kashmir, Senator Sherry Rehman of the PPP said Modi had become the most dangerous terrorist in the world.
Firing a broadside at the ruling PTI, the PPP senator said the government neither had a plan on Occupied Kashmir, nor a strategy to overcome the country’s economic crisis.

“It’s imperative that we find a solution to the Kashmir dispute,” she added.

Rehman also pointed out the absence of ministers in the House.
“The ministers are not taking the parliament seriously,” she complained.

Senator Sitara Ayaz urged the judiciary to play its role in bringing an end to the increasing cases of child abuse.

The session was later adjourned till Saturday (today).