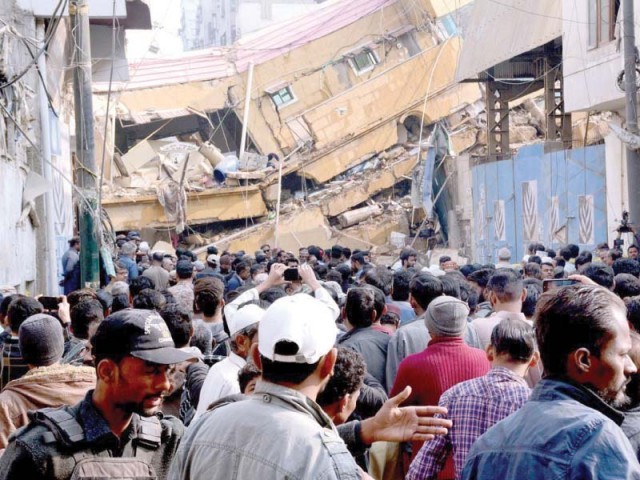 Onlookers watched a residential building collapse across the street on Monday after it was evacuated by the families who lived there. PHOTO: APP

No casualty was reported as the residents of the buildings had evacuated it before it collapsed in front of their eyes.

According to residents of Ramzan Centre, situated in Timber Market, they had begun hearing noises late on Sunday night, around 3am. However, they told The Express Tribune, they could not figure out the source of the sounds. After Fajr prayers on Monday morning, though, they noticed that the structure had tilted and cracks had appeared in the walls.

“Everyone was crying out, telling us to evacuate the building,” narrated a resident. “All the families came outside, leaving what they had in the building that fell in front of them.”

The officials who were informed rushed to the spot, with police, Rangers and Sindh Building Control Authority (SBCA) authorities sealing the street before evacuating the residential structure.

Hundreds of people witnessed the building come crashing down, including SCBA demolition director Abdul Sajjad, who was monitoring the situation from the street. While four timber warehouses sustained severe damage, no one was injured.

Bashir Siddiqui, the anti-encroachment director at the Karachi Metropolitan Corporation, said that rescue work was initiated soon after the building fell, adding that it would take at least four days to remove the rubble.

Officials and residents told The Express Tribune that the apartments were built in 2004 by two builders identified as Hanif Bilal and Hanif Baloch. The building was occupied by 24 families residing in 18 flats, along with two large timber shops.

“I used to own the plot, but it was purchased by the builders in 2004,” said Suleman Soomro, the former president of the Timber Market Association, adding that Bilal and Baloch were responsible for the incident.

Speaking to the media after the incident, Karachi Commissioner Iftikhar Ahmed Shallwani said that the residents had safely been evacuated before the building crashed down. He claimed that Sindh Chief Minister Syed Murad Ali Shah had announced the provincial government would provide financial compensation for the residents and shopkeepers of Ramzan Centre.

“The building was not that old, it was built in 2004,” he said, adding that an inquiry would be conducted while the builders were also being contacted.

SBCA director-general Zaffar Ehsan told The Express Tribune that a committee had been formed to investigate the incident. “Strict action will be taken against those found to be responsible,” he stated.

Residents of the area complained that there were dozens of such buildings in different parts of the city that urgently needed the attention of the authorities. They alleged that SBCA officials permitted builders to use substandard materials for construction.

The Association of Builders and Developers too held SBCA responsible for the incident, claiming illegal and substandard construction work had long been carried out across the metropolis under the regulation authority’s nose.

“These structures can cause a major catastrophe in the city,” said Mohsin Sheikhani, the association chairperson, adding that while it was fortunate no lives had been lost, several citizens would have lost their lifelong savings. He called for an impartial inquiry and strict disciplinary action against those responsible for the collapse.

Sindh govt has laid down development network in city: CM