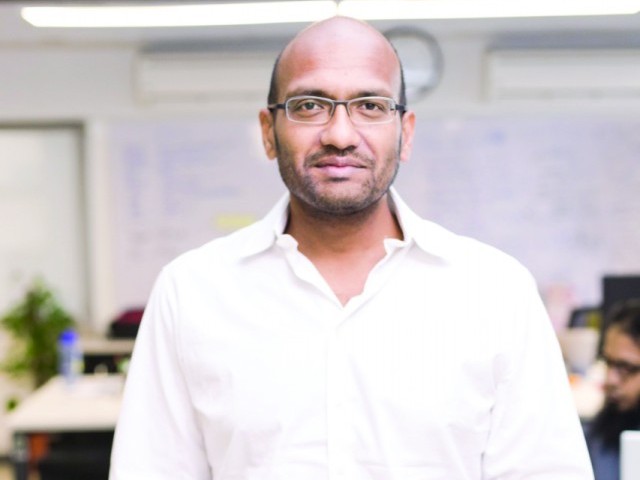 Atif Azim believes that if provided opportunities, Pakistani youth can make it big in technology sector

KARACHI: Over the years and past many seasons, the landscape surrounding the NED University of Engineering and Technology (NEDUET) had transformed drastically. As Dr Abdul Azim registered the change, the air, pregnant with nostalgia, weighed him down with the memories of his youth. Lost in thoughts, as vague, fleeting images from the past came to life before his eyes, he was startled out of his reverie coming across a familiar face.

It belonged to the security guard sitting beside the varsity’s gate. But he had been there many years ago as well, when the now aged Abdul was a student. Surprisingly, wrinkles and lines had not marred his face, and his posture lacked the bent that signifies aging. Intrigued, Abdul felt compelled to talk to him and later came to know that he was actually the son the security guard who used to guard the gates during Abdul’s student life.

The guard not just bore a striking resemblance to his father but was also carrying forward his legacy. He would live the same life as his father, with only marginal improvement, if any – the distressing thought gripped Abdul.

It was not the same in the case of his own son, though. He had come a long way, having emerged as a leader and pioneer in the technology sector – Atif Azim is known to the world as the brain that designed the ‘Careem’ application and the co-founder of VentureDrive, a technology solutions company.

If it could happen for Atif, then why not for others? The thought nagged Abdul.

For Atif, the question has only one answer – education.

“Education develops thought and enlightens one to live in society [in a civilised manner],” he said. “Education brings about change.”

Atif’s ideas are a product of him being familiarised with his father’s rise from living an ordinary life to acquiring education at top ranked institution.

Hailing from Karachi, Abdul studied at a public school and later got admission at NEDUET. He stayed focused on making the best of any and all learning opportunities presented to him, which resulted in him securing a scholarship for completing PhD at a university in London. His hard work and education enabled him to go places, as he landed a job in the Middle East and provided the best he could to his family.

Atif acquired education at renowned and prestigious institutions. He attended the Imperial College of Science and Technology, where he studied electrical engineering at undergraduate level, and moved on to acquire postgraduate education in the streams of electrical engineering and computer science from Stanford University. He has served on high positions in tech giants like Cisco Systems, KPMG Global and Brience Inc.

Reflecting on his father’s journey, Atif said, “I feel proud that my father made it to one of the best universities in the world despite spending his formative years at a public school.”

Inspired by his father’s struggle and stirred by values instilled in him by his parents, Atif returned to Pakistan with the sole intention of serving the country.

“People leave Pakistan to gain education, experience and money. I had it all. And so, I returned,” he said.

Back in his native country, he dedicated himself to developing the technology sector as well as a platform for budding tech experts to progress and make it big. Atif co-founded Pakistan’s first private, tech-focused incubator, DotZero. He has also taken up the role of an angel investor, providing financial assistance to startups in the Middle East. His main area of interest, however, continues to be prompting technological advancements in Pakistan and providing easy access to growth platforms to the emerging talent to help them realise their dreams.

A visionary, Atif sees immense potential for advancement in the technology sector in Pakistan. He finds the young talent in the country capable of emerging as leaders in the tech industry and skilled to bridge gaps in a range of areas by coming up with innovative technology-based solutions.

The tech guru spoke with particular reference to Karachi – the economic hub and the country’s largest metropolis – in this regard.

“Karachi has been grappling with problems similar to those faced by other big cities,” he said. These, in his opinion, can easily be resolved through technology-based solution, which he thinks the young entrepreneurs from the very city are capable of devising. “They have the ambition and the skill to solve the issues troubling the city via technology,” said Atif.

Plus, government policies too have been designed to encourage enterprise in the technology sector, he said, adding that “the opportunities [here] are countless.” Elaborating further, he said, “No taxes are applied on IT exports in Pakistan, which makes it easier for local companies to compete with international counterparts and the government realises the importance of IT and has been supporting incubation centres.”

Foreseeing potential for technological advancement in the country, moved by his ambition and with faith in Pakistan’s young developers, Atif and his team set about to creating an application that was to gain recognition and acclaim internationally.

Back then, his office was too small, recalled Atif. But he had big dreams. And he was determined to make them a reality. Driven and focused, he developed the mobile application for Careem, a ride-hailing company, which turned out to be the remarkable beginning of his journey to success.

Presently, he has to his credit the development of the website and application for Islamic Finder, a digital platform featuring information pertaining to Islam, development of an Integrated Mobility Platform for traffic for traffics management and monitoring of Dubai’s transport system and development of  applications for various airlines, under the banner of his company, VentureDive. The company has also been assigned the creation of an application for diabetic patients in the Middle East and Gulf states, to help them with monitoring their sugar levels and treatment.

However, while Atif is optimistic about the technology sector witnessing steep growth in the future, he does acknowledge that the ride to the top will not always be smooth and there will be some bumps on the way.

Identifying one of these problems, he said there was a need to remove obstacles that hamper the movement of Pakistani IT professionals out of the country and international IT experts visiting the country. He also feels the need for diversity in the IT sector, explaining that a strategy needs to be devised for increasing the participation of people from the remote areas and not just limiting the scope of the technology sector to a few cities.

Besides, he calls for a liaison between the IT companies, universities, government bodies and incubation centres to put in collaborative efforts for polishing the skills of aspiring technology professionals in Pakistan, enabling them to compete and make a mark internationally.

Looking forward to a bright future

Nevertheless, Atif envisages a bright future for the technology sector and budding tech professionals in the country.

He appreciates the growing trend of entrepreneurship among IT professionals. Startups colouring the IT landscape excite him. And he is thrilled at the prospect of technology-based solutions being employed to resolve issues pertaining to healthcare and education.

If ever his confidence in the “promising technology scene of Pakistan” falters, it is soon restored, finding affirmation in the success of the application for Careem. “It shows that we are capable of creating products that can compete in the international market,” he said.

Impelled by his ambition, he is determined to work towards providing better academic opportunities to the youth of Pakistan, so that they may grow and prosper, making a mark in their chosen fields. So that they may not necessarily have to settle for adopting the same profession as their fathers. So that they may take a chance at changing their destiny. And so that the son of a security guard, if nothing else, is at least able to consider the possibility of having a bright future.

Read more: IT , IT exports , NEDUET