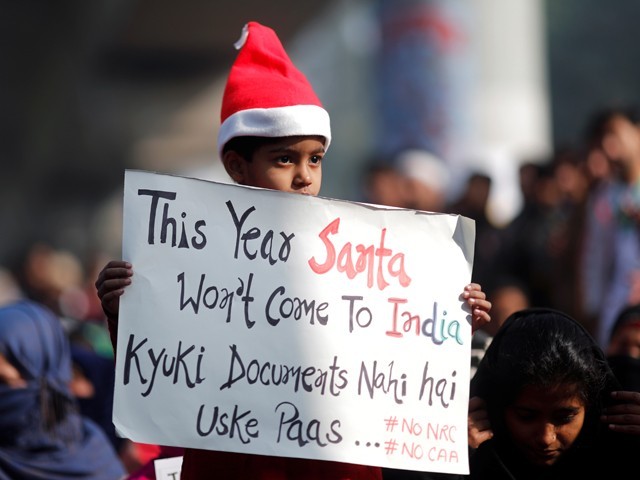 A girl wearing a Santa Claus hat holds a placard as she attends a protest against a new citizenship law, outside the Jamia Millia Islamia university in New Delhi, India, December 25, 2019. PHOTO: REUTERS

MUMBAI: Huge protests in India against a citizenship law seen by many as anti-Muslim have wrong-footed Prime Minister Narendra Modi and sent his Hindu nationalist party scrambling to douse the anger.

In Modi’s biggest challenge since taking office in 2014, hundreds of thousands have rallied against the law offering citizenship to immigrants from non-Muslim minorities who have fled Afghanistan, Bangladesh and Pakistan.

At least 21 people have died in clashes with police. 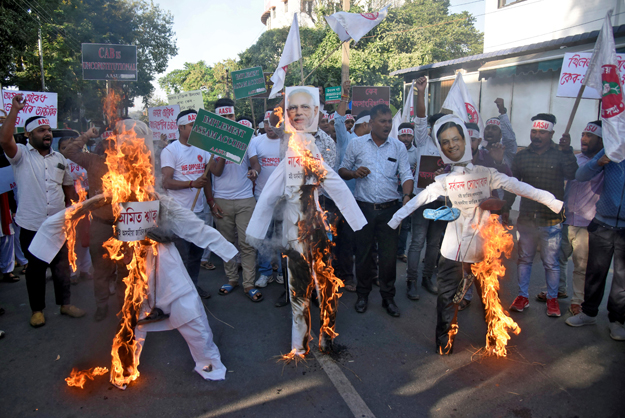 Now they are reaching out for help in defusing the crisis to allies and opponents sidelined when the bill passed earlier this month, the sources said.

“I really did not see the protests coming … not just me, other BJP lawmakers were also unable to predict this kind of anger,” Sanjeev Balyan, a ruling party legislator and junior federal minister, told Reuters.

While there is no threat to his big parliamentary majority, the 69-year-old Modi’s image as a master strategist with his finger on the pulse of the people has taken a hit.

Publicly, his government has prioritised development, seeking to make India a $5 trillion economy by 2025.

But Modi’s muscular pro-Hindu platform has also gone down well in a nation that is over 80 per cent Hindu: he won back-to-back national elections with thumping majorities.

Outrage at the citizenship law has been fanned by resentment against the government for following a majoritarian agenda instead of addressing an economic slowdown and loss of jobs.

Three other BJP lawmakers and two federal ministers, who spoke on condition of anonymity, told Reuters they were mobilising party supporters from all walks of life to start community dialogues and dispel discontent over the law.

They said they had been prepared for some anger from Muslims, but not the widespread protests that have convulsed most major cities for nearly two weeks. 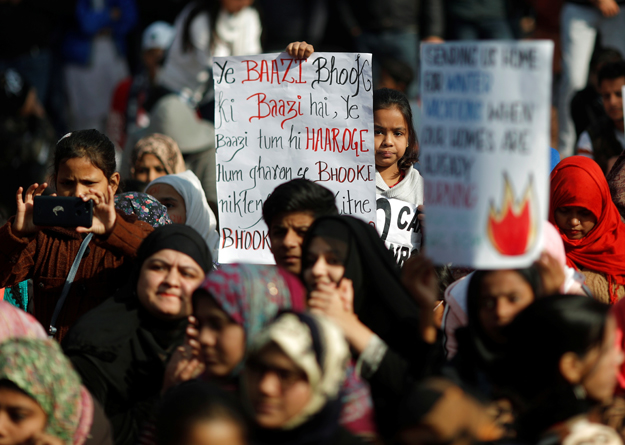 A girl holds a placard as she attends a protest against a new citizenship law, outside the Jamia Millia Islamia university in New Delhi, India, December 25, 2019. PHOTO: REUTERS

“I believe that the political math behind the clearance of this law was not taken into account,” said one of the federal ministers, an apparent reference to lack of consultation with allies and opposition parties.

In a nation with a history of sectarian bloodshed, the minority Muslims fear the new law – and a planned register for people to prove lineage – could make them second-class citizens.

Across both religious groups, students, politicians and rights activists have also taken to the streets, saying Modi is jeopardising India’s secular constitution.

The government denies the citizenship register is imminent and says none of the changes will affect existing citizens.

Home Minister Amit Shah, widely seen as the second most powerful man in the country, repeated in a television interview on Tuesday that Muslims had no cause for worry.

“We are all in damage control mode,” said the other federal minister, adding that the BJP and hardline Hindu allies have launched a campaign to explain that the law is not discriminatory.

The Rashtriya Swayamsevak Sangh (RSS), which is the ideological parent of the BJP, has also launched a movement across urban slums to counter opposition to the bill.

“The violent protests are not because the people were not properly informed about the new law, but because they were intentionally wrongly informed by forces with vested interests,” Manmohan Vaidya, a senior RSS leader, told Reuters.

“It’s evident that people are protesting against the law and also venting against Modi’s autocratic style of leadership,” said Sanjay Kumar, director of research institute the Centre for the Study of Developing Societies.

When Modi, a veteran politician and son of a tea seller, came to power five-and-a-half years ago, he promised growth, jobs and development. But he was criticised for haphazard tax reform and shock demonetisation of high value currency notes in his first term – which contributed to an economic slowdown – as well as intolerance for dissent and ignoring anti-Muslim hate crimes.

Nevertheless, he was re-elected with an even stronger majority earlier this year after a strong response to a security standoff with old foe Pakistan.

In August, Modi’s government withdrew semi-autonomous privileges for Jammu and Kashmir, India’s only Muslim-majority state, and downgraded it to a federally-ruled territory.

In November, the Supreme Court ruled that a Hindu temple could be built at a site where a right-wing mob tore down a 16th-century mosque in 1992, one of India’s most divisive disputes. The government welcomed the decision.

Then came the citizenship law.

“I feel they can’t create jobs and hence they are passing such a disturbing law,” said Ghanshyam Tiwari, a student protesting in the city of Lucknow last week.

The protests are backed by the opposition Congress party, which has dominated Indian politics for most of the 72 years since independence but was soundly beaten in the last two national elections. It said the gloves were off between secular India and Modi’s hardline Hindu agenda.

“For the first time in India’s history a law has been framed on the basis of religion,” Prithviraj Chavan, a senior Congress leader, told Reuters. “The ruling party’s strategy to make India a Hindu-first nation has backfired.”