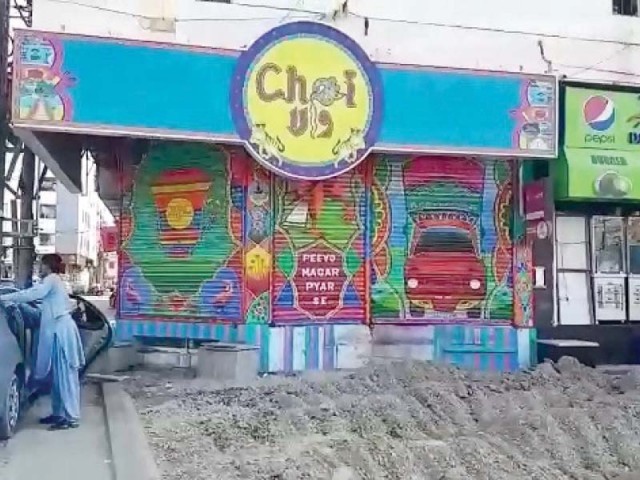 Officials dug up the ground outside various tea shops on Saturday to stop them from putting out tables and chairs for customers, making it difficult for the shops to continue operating. PHOTO: EXPRESS

KARACHI: Defence Housing Authority (DHA) and Defence police administration dug up the ground outside a number of tea shops in DHA early on Saturday morning. The operation was conducted after a girl was recently kidnapped and her friend shot outside a tea shop in the area, said sources.

The ground has been dug up using shovels and heavy machinery in order to stop shopkeepers from placing tables outside for customers in the evening. Shopkeepers were further warned that placing tables and chairs outside is strictly prohibited from now on, with officials adding that violators would be arrested.

The owners of the tea shops said that the police had already ordered them to close all shops and hotels by midnight, but this new restriction has made it nearly impossible for them to run their businesses. They said that they paid between Rs200,000 and Rs250,000 in rent for their shops.

Adding that hundreds of staff members and waiters worked there on daily wages, they said that their workers would be left to beg on the streets if business came to a stop. “Taking such measures instead of providing security to citizens is not understandable,” maintained a shopkeeper.

Fears about security in the area arose after 19-year-old Dua Mangi was abducted by unidentified persons from outside a tea shop in Bukhari Commercial Area on the night of November 30, while her friend, Haris Fatah, was shot and injured for putting up resistance. Mangi returned home a week later on December 7.