She was kidnap­ped from Karach­i's DHA last week
By ​ Our Correspondent
Published: December 7, 2019
Tweet Email 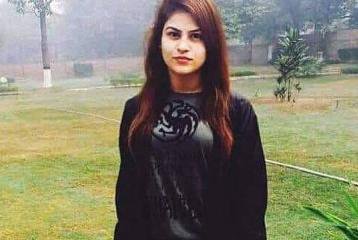 KARACHI: The 19-year-old Dua Mangi, who was abducted by unidentified people from Bukhari Commercial Area in Defence Housing Authority (DHA) of Karachi last week, has been recovered.

“Dua Mangi, daughter of Nisar Mangi, who was kidnapped from Defence Khayaban-e-Bukhari, has returned home safely,” DIG South Zone Karachi said in a statement on Saturday.

He added that investigation into the case was continuing and further information would be made public soon.

Dua’s father also confirmed the development, and thanked the media and civil society for their support.

“By the grace of God and blessing of the loving people of Sindh, people of Pakistan and friends from all over the world, my daughter Dua Mangi reached home safely,” he wrote in a Facebook post. “I am very much thankful to friends from media, specially civil society who helped us in these tough circumstances and shared their feelings with my family.”

Dua was abducted on the night of November 30. Her friend, Haris Fatah, who was with her at the time of the abduction, was shot for putting up resistance.

On Thursday, the family of the abducted girl had denied rumours of receiving a ransom call and had criticised Sindh Police and the provincial government for their failure in recovering the abducted girl, claiming that the rumours of ransom were being spread to divert attention from the protests demanding Dua’s recovery and to cover up the authorities’ failure.

The police, faced with criticism and protests by family members and civil society members, had claimed the force was “doing its best” to recover the abducted girl, but after the passage of almost a week, had failed to crack the case.