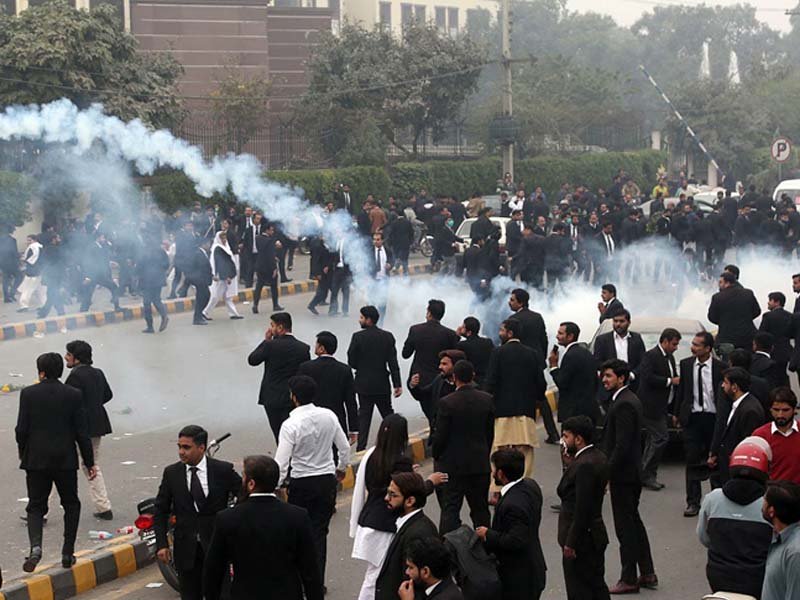 KARACHI: Responding to the call by the Pakistan Bar Council, lawyers in Sindh went on strike on Friday. In Karachi, no court proceedings could take place as the lawyers did not appear for hearings in the Sindh High Court (SHC), city courts and Malir district courts. They were protesting against what they claimed was partial and biased conduct of the police and local administration towards the lawyers involved in the attack on the Punjab Institute of Cardiology (PIC), Lahore.

The lawyers seek a judicial inquiry into the incident as well as the removal of anti-terrorism clauses from the cases registered against lawyers in Lahore. The lawyers also objected to the action taken by the Islamabad High Court (IHC) against the general-secretary of the IHC Bar Association. At a press conference, held later in the day, the Supreme Court Bar Association (SCBA) also demanded a neutral inquiry into the matter, by a committee comprising judges of the high court.

SCBA calls for an inquiry

A press conference was held at the Supreme Court Karachi Registry on Friday by SCBA President Advocate Syed Qalb-i-Hassan and other senior lawyers.

Addressing the press conference, Hassan maintained that the doctors had brutally beaten up lawyers earlier and an FIR was lodged as well but no action was taken about it. Attempts were made to peacefully resolve the issue between the lawyers and the doctors, said Hassan. He condemned the incident that occurred on Wednesday and said that the lawyers should not have gone to PIC. However, he added, the lawyers were pelted with stones and beaten with sticks. More than 100 lawyers were arrested and presented before the courts as terrorists, said Hassan. He maintained that the attitude of the government and the police towards the lawyers was as if the lawyers hailed from some hostile country.

Hassan also reminded the lawyers to not take the law in their hands while claiming the association was trying to resolve the matter. A high-profile committee should be formed which will ascertain who is responsible for the incident and punish them according to the law, he said. Hassan was of the view that the lawyers should be handed over to the SCBA and the association would punish them accordingly, adding that doctors should punish any doctors who were responsible. He claimed that the arrested lawyers were being tortured brutally by the police, which was not tolerable. “We condemn the behaviour of the police. We are not against the media as lawyers are fighting for the media too. But the media should [also] highlight what the doctors have done,” said Hassan.

Meanwhile, SCBA Vice President Aurangzeb Asad objected to the term ‘vukla gardi [lawyers’ brutality]’. He maintained that lawyers fight for the rights of citizens. Doctors and lawyers are among the educated members of society, said Asad. “We don’t want to add fuel to the fire as we fear it will spread across the country. The government should play its part and make the doctors and lawyers reconcile,” he added.

At the city court

Earlier on Friday, a joint general body meeting of the Sindh High Court Bar Association, Karachi Bar Association and other bar associations was held at the Karachi city court. The meeting passed a joint resolution seeking a detailed judicial inquiry, the removal of anti-terrorism clauses from the cases registered against lawyers and their release. The resolution also sought action against the doctors who allegedly provoked the lawyers and resorted to violence.

Muhammad Aqil, a member of the Pakistan Bar Council, said that the unity of lawyers since 2007 does not sit well with powerful elements. According to him, it was wrong to declare a single party as the responsible one before investigating the matter.

Another member of the Pakistan Bar Council, Yasin Azad, was of the view that this was a conspiracy to instigate two educated groups of society against each other. He stressed the need to render the ‘conspiracy’ unsuccessful.

Heritage ignored: With no flights, Mohenjo Daro at risk of being forgotten