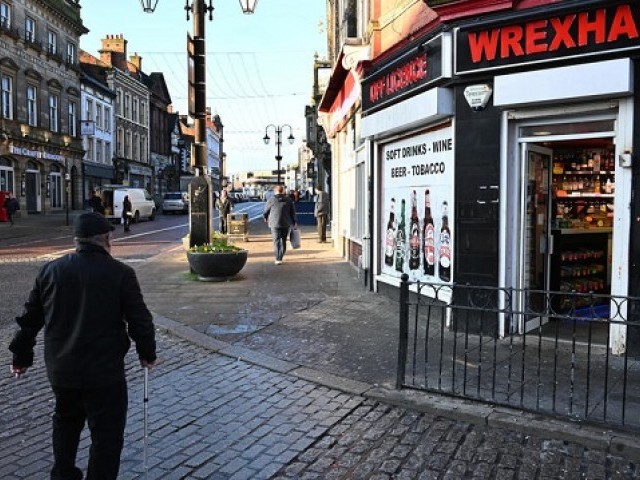 WREXHAM, UNITED KINGDOM: Just a few years ago, there would have been few predictions that the Conservative party could win in a place like Wrexham in northeast Wales, a Labour seat since 1935.

But Brexit has disrupted political loyalties and allegiances since the referendum on EU membership in 2016, making a Tory MP in the town a real possibility.

Analysts say Wrexham could be a bellwether for the national result of Thursday’s general election, and make Britain’s path out of the European Union clearer.

Last month, polling suggested Wrexham and three other seats in north Wales would also turn from red to blue, with two others too close to call.

“If the Conservatives are going to win an overall (UK) majority then the path is partly through Wales,” said Roger Awan-Scully, a political analyst at Cardiff University.

Wrexham “needs quite a small swing from Labour to the Conservatives to change hands, and without the incumbent Labour member standing again it would be quite difficult for them to hold the seat under any circumstances”, he added.

“Given the strong pro-Leave sentiment there, seen again in the May European elections, it will be even harder for Labour,” he told AFP.

Wales voted 52.5 per cent “leave” in the 2016 referendum on Britain’s membership of the European Union, while 59 per cent of voters in Wrexham were in the leave camp.

Staunchly Labour Brexit-voting areas like it, whose voters are unhappy their wishes have not yet been implemented, have been key targets for Prime Minister Boris Johnson’s Tories.

At a debate hosted by news website Wrexham.com ahead of Thursday’s vote, Tory candidate Sarah Atherton decided against facing her rivals.

Instead she opted to meet with Britain’s health minister, Matt Hancock, who was in the vicinity. The other candidates seized on her absence.

Labour’s Mary Wimbury said: “If you’re not prepared to turn up and be your own voice then I think that’s pretty disrespectful to the people of Wrexham.”

Across Wales, Labour is still likely to be the biggest party but has seen its stranglehold diminish since the creation of the devolved Welsh Assembly in Cardiff in 1999.

Labour risks losing other Welsh seats in the UK parliament, with its policy on Brexit — a renegotiation of the divorce terms with Brussels and a second referendum — seen as indecisive.

Arch eurosceptic populist Nigel Farage’s Brexit Party and the Tories are hoping to capitalise on Labour’s perceived lack of clarity, at the risk of splitting the Leave vote.

“The people who believe in a genuine Leave will vote for us,” said the Brexit Party candidate in Wrexham, Ian Berkeley-Hurst, at a cafe overlooking streets and buildings signposted in Welsh and English.

In Wrexham, “because of the split of the vote… we have to have Labour voters coming on board and it’s pretty clear we do”, said the 59-year-old English lawyer.

He is campaigning on a pledge to turn around Wrexham’s fortunes. Like many across Britain, the town is struggling with high business taxes, shop closures and homelessness.

If anyone is set to switch sides in Wrexham, though, they’re keeping their counsel.

Brexit “has got on my nerves, it’s gone on for that long”, said Laura, 32, a Labour supporter and psychology student at the local university.

“I’m a single parent, four kids, back to education, I struggle a lot.

“I’m not a big lover of (Labour leader) Jeremy Corbyn but I can’t see it getting any worse (with him as prime minister) for people like myself, people that rely on benefits.”

Hoping to stop the Conservatives, Labour and the Brexit Party in Wrexham and elsewhere across the UK will be the Remain Alliance comprising Welsh nationalists Plaid Cymru, the Liberal Democrats and Green Party.

The three small anti-Brexit parties are standing aside for each other in certain seats with the aim of improving the chances of having a pro-Remain candidate elected.

While the alliance will be present in more than one-quarter of Welsh seats, analyst Awan-Scully said it would have little impact, including in predominantly English-speaking Wrexham.

“While the Remain Alliance covers a far greater proportion of the seats in Wales than England, the major fault with it is that it doesn’t include the Labour party,” he said.

“How effective will any tactical voting messages be? I’m sceptical that this will really have much effect.”