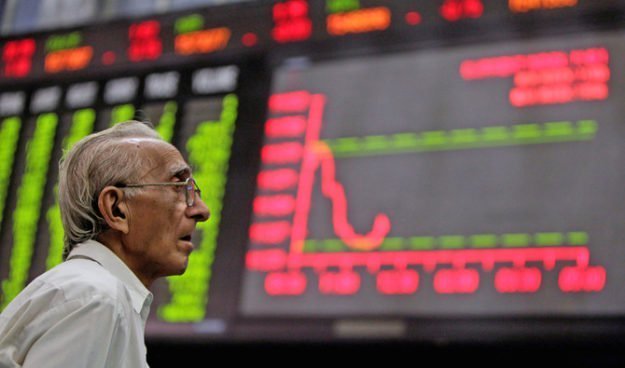 KARACHI: The bullish spell of the past week came to an end on Monday as a lack of triggers drove the index to finish on a negative note.

After a brief upward open, the KSE-100 began a steady retreat in to the red zone as investors resorted to profit-taking. The downward trend was seen in sectors across the board due to subdued interest by investors. With no positive developments in sight, the index ended the day in red.

JS Global analyst Danish Ladhani said that equities closed on a negative note with the benchmark KSE-100 Index shedding 289 points to close at 40,443 levels, down 0.7%.

“Profit-taking was witnessed in Monday’s session; however, this correction should be taken as an opportunity to accumulate value stocks. However, overall trend remains bullish in medium to long term,” he added.

“Moving ahead, we expect market to remain positive.”

According to Aba Ali Habib Securities, the declining trend initiated across the sectors in bourse on Monday, which ended Monday’s session 289 points lower at 40,732.25 points.

“The KSE-100 opened in the green zone, however, profit-booking and increase in energy prices put downward pressure on key sectors,” the report stated.

Investors’ confidence remained subdued during the trading due to lack of positive triggers in bourse. The major laggards responsible for dragging down the market were UBL (Rs5.51), HBL (Rs2.28), LUCK (Rs12.05), PSO (Rs7.03) and HUBC (Rs1.37), cumulatively shed 194 points from the index.

Overall, trading volumes decreased to 320.1 million shares compared with Friday’s tally of 416.9 million. The value of shares traded during the day was Rs11.4 billion.

Shares of 388 companies were traded. At the end of the day, 147 stocks closed higher, 223 declined and 18 remained unchanged.

Foreign institutional investors were net buyers of Rs127.8 million worth of shares during the trading session, according to data compiled by the National Clearing Company of Pakistan.