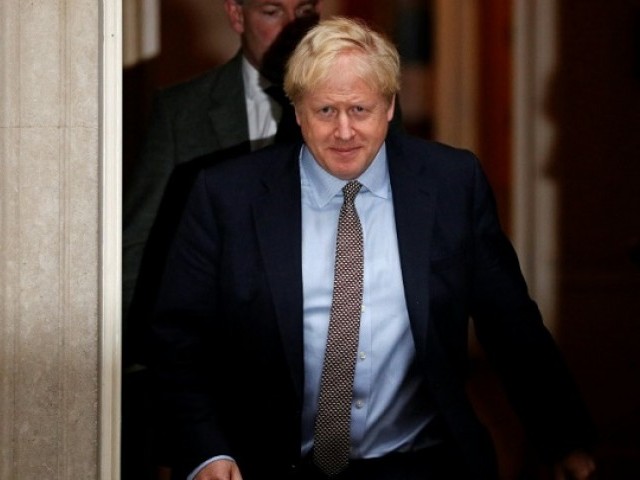 LONDON: Prime Minister Boris Johnson has promised to end the Brexit turmoil and unite Britain if re-elected this week, but critics accuse him of Trump-style populism that will only divide the country further.

The former London mayor has toned down his trademark jokes and bluster ahead of Thursday’s vote, as he focuses on a promise to “Get Brexit Done” by finally taking Britain out of the European Union.

Opinion polls suggest his efforts to present himself as a strong and optimistic leader are working and his Conservative party is on course to win a majority in the House of Commons.

But Johnson remains a polarising figure, not least for his leading role in the 2016 Brexit referendum campaign, which was marked by exaggerated claims about the EU and anti-immigrant rhetoric.

His tendency to play to the crowd both as a politician and in his previous career as a journalist has also drawn accusations of racism and misogyny.

The list of offences — writing about gay “bumboys” and veiled Muslim women looking like “letter boxes” — has grown with comments unearthed in the campaign, including about “feckless” working-class men and single mothers.

But he denies he meant any harm and supporters dismiss this as “just Boris”, welcoming his off-the-cuff style as a sharp contrast to the soundbites of many other politicians.

Crucially, many voters believe he is a better proposition than left-wing Labour leader Jeremy Corbyn, who polls put as the most unpopular opposition leader of the past 45 years.

Johnson’s relaxed style and lack of attention to detail has led to accusations of incompetence — a perception fuelled by a chequered stint as foreign minister under former premier Theresa May.

He was notably accused by the family of Nazanin Zaghari-Ratcliffe, a British-Iranian woman held in Tehran for sedition, of jeopardising her case by mischaracterising her job at the time.

His aides point instead to the coordinated expulsion of Russian diplomats by many of Britain’s allies, including the United States, after a nerve agent attack in England last year blamed on Moscow.

“Those who did not take him seriously were wrong,” French President Emmanuel Macron said at the time.

His credibility took a hit when, despite MPs passing a law to stop his threat of leaving the EU with no deal, Johnson refused to acknowledge Brexit would be delayed past October until it actually happened.

He now hopes that, if he wins enough seats, he can get his deal through in time to leave the EU on the next deadline of January 31.

However, experts question his pledge to get a new trade agreement with Brussels by December 2020, warning this is only possible with big compromises.

Alexander Boris de Pfeffel Johnson was born in New York in 1964 into a high-achieving family of future politicians and media personalities.

According to his sister, Rachel, as a child he once aspired to become “world king”.

He attended the elite Eton boys school and Oxford University to become a journalist for The Times — a job he promptly lost for making up a quote.

Johnson was later sacked from the Tories’ top team for lying about an extra-marital affair, one of several personal scandals that have marked his career.

Twice divorced, he now lives in Downing Street with his girlfriend, former Tory party staffer Carrie Symonds. But he rarely talks about his private life and some five children.

He makes an exception for his great-grandfather Ali Kemal, who was briefly interior minister in the last grand vizier of the Ottoman Empire’s government — a fact he often cites to reject accusations of racism.

He also points to his two successful terms as mayor of liberal London as proof of that he is a moderate, unifying “One Nation Conservative”.

Johnson’s path to power was rocky — his first tilt at the Tory leadership in 2016 failed after his closest ally betrayed him.

But his resignation from May’s cabinet last year in protest at her Brexit plan laid the groundwork for his successful leadership bid in July this year.

He has now staked everything on this election.

A clear victory would secure him a permanent legacy among Britain’s most influential leaders, including his hero Winston Churchill.

But defeat would put Brexit at risk and consign him to the growing list of leaders felled by rows over the country’s role in Europe.