Conser­vative­s have seen their popula­rity surge since Johnso­n took over from Theres­a May four months ago
By AFP
Published: November 24, 2019
Tweet Email 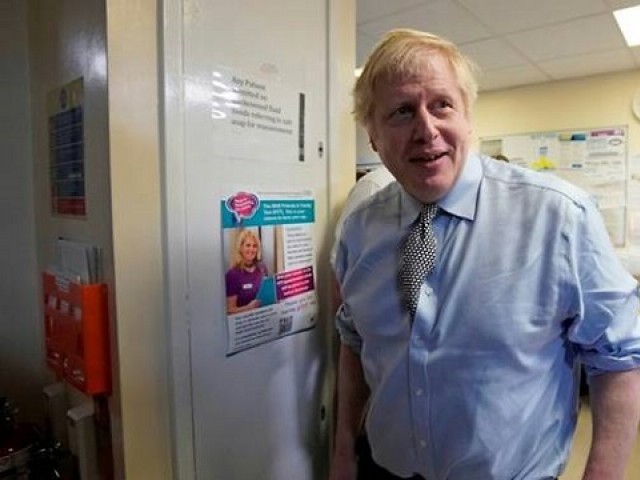 British Prime Minister Boris Johnson sees Britain's third general election in four and a half years as the only way to break the Brexit logjam. PHOTO: AFP

LONDON: British Prime Minister Boris Johnson unveils his Conservative Party’s manifesto on Sunday, pledging to move on from Brexit and austerity in a bid to secure a general election victory.

Having taken over a minority administration in July and unable to speed his EU divorce deal through parliament, Johnson is seeking a majority at the December 12 snap general election.

He sees Britain’s third general election in four and a half years as the only way to break the logjam on Brexit, which 52 per cent of voters plumped for in the seismic 2016 referendum.

Having got the Brexit date delayed three months from October 31 to January 31, opposition parties backed his call for an early general election.

“We have developed a clear plan that respects the referendum, gets it done, and allows us to move on and focus on delivering real benefits for you and your family,” the centre-right party leader said.

The Britain Elects poll aggregator puts the Conservatives on 42 per cent, ahead of the Labour main opposition on 29 per cent, the anti-Brexit Liberal Democrats on 15 per cent, the Brexit Party on six per cent and the Greens on three per cent.

The Conservatives have seen their popularity surge since Johnson took over from Theresa May four months ago.

They also seem set to benefit from Nigel Farage’s Brexit Party pulling out their candidates from more than 300 seats being defended by the Conservatives.

Farage had been accused of risking splitting the pro-Brexit vote and allowing anti-Brexit candidates to win seats, under Britain’s first-past-the-post constituencies system.

Despite the poll lead, the election outcome remains uncertain and commentators call for caution, mindful that May had a huge poll lead in the 2017 general election which rapidly melted.

The main plank of the Conservative manifesto is the Brexit deal Johnson negotiated with Brussels in October. He claims the treaty is “oven-ready” and good to go — as long as he can get a majority.

He insists the deal will allow Britain to regain control over its laws, money and immigration policy.

Johnson’s chief rival, left-wing Labour leader Jeremy Corbyn, wants to renegotiate a new, softer Brexit agreement within three months and then put that to a referendum alongside remaining in the EU by the end of June. Corbyn would stay neutral during the process.

Johnson has blasted Corbyn for his strategy in refusing to recommend either his own proposed Brexit deal or staying in the EU.

However, Johnson has his own weak spots, especially after the years of austerity imposed by Conservative governments since 2010.

He promises to end the years of reining in the budget deficit by pumping billions of pounds into public services.

Johnson has pledged to make the streets safer by recruiting 20,000 police officers.

The Conservatives have also said 50 million more appointments in family doctors’ surgeries will be created every year if they win a majority.

Johnson was criticised by members of the public during a televised questions session on Friday over the Conservatives’ handling of the NHS — but he insisted progress could only be made once the Brexit impasse is resolved.

Johnson has announced a three-year plan to increase state-school spending in England by £7.1 billion by 2022-23.

On immigration, he wants to end freedom of movement for EU citizens and introduce an Australian-style points-based system.

The scale of eastern European immigration since 2004 was one of the key factors behind the Brexit vote in 2016.