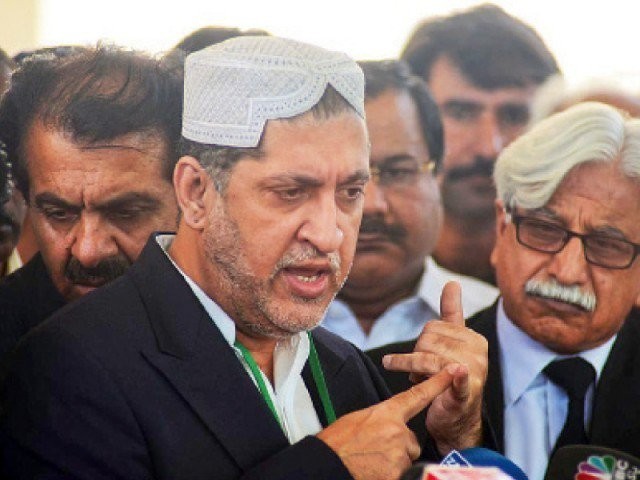 ISLAMABAD.: Balochistan National Party-Mengal (BNP-M) chief MNA Akhtar Mengal on Thursday warned that his party would pull out of its alliance with the ruling PTI if the four women recently arrested in Awaran, Balochistan were not released.

“This wouldn’t be for the first time for us to quit the ruling alliance. We will not compromise when it comes to our dignity,” the head of the BNP-M said while delivering a fiery speech in the National Assembly.

“Dictators have failed in the past when they tried to run Balochistan at gunpoint and the present government won’t be able to do either,” he added.

BNP-M lawmakers and MNAs from tribal districts then staged a token sit-in in front of speaker’s dais and staged a walkout from the House.

The deputy speaker, who was chairing the session, summoned the interior minister to the assembly to explain why the women were arrested.

Later, the opposition lawmakers also staged a walkout over the authorities not allowing incarcerated MNAs to participate in the session despite the issuance of their production orders by the speaker.

PML-N leader Ahsan Iqbal said the opposition MNAs would continue their boycott of the proceedings until the jailed lawmakers were brought to the assembly.

He pointed out that that party leader Khawaja Saad Rafique had not been brought to the session despite the issuance of his production order.  He added that the speaker had not even issued the production order of another party leader, Rana Sanaullah.

After the BNP-M and opposition MNAs left the House, the session was adjourned over lack of quorum till Friday (today).

Earlier, MNA Shahida Rehman complained that there were too many rats in the parliament lodges and it was almost impossible to live there. “The members living there feel extremely uncomfortable,” she added.

Abdul Akbar Chitrali said all government employees, especially those working at the Capital Development Authority (CDA), should be shifted to the parliament lodges.

The deputy speaker asked the CDA chairman to take notice of the issue and said a committee headed by Farrukh Habib was already working on the problem.

Parliamentary Secretary for Interior Shaukat Ali Thursday informed the House that the interior ministry and its 21 affiliated departments had recruited 17,231 employees during the tenure of the present government.

He added that 40,132 people had been recruited and 24,496 employees promoted in the ministry and its affiliated departments in the last five years.

Responding to a question asked by MNA Shamim Ara Panhwar, he said the recruitment was carried out strictly in accordance with rules and policy guidelines circulated by the establishment division from time to time.

“Around 123 officers of BS-20 are serving in interior ministry and its affiliated departments,” he added.

He said the total number of official vehicles of the ministry currently in use was 1,052 and none of them was missing or bring misused.

To another question, the secretary said the crime rate in Islamabad had decreased from August, 2018 to September 2019 due to a better strategy adopted by the capital territory police for crime prevention and detection.

Parliamentary Secretary for Overseas Pakistanis and Human Resource Development Javeria Zafar told the National Assembly that the government intended to increase the minimum pension of beneficiaries of Employees Old-Age Benefits Institution (EOBI) from Rs6,500 to Rs13,000 per month in the next four years.