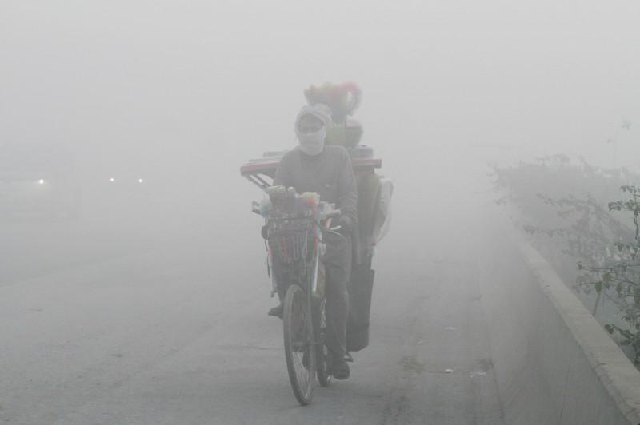 LAHORE: Air quality monitors of local and international agencies, on Wednesday, once again ranked the provincial capital in the red zone as the city has been hovering between the third and fourth most polluted place in the world.

The official air quality statistics of the Punjab Environmental Protection Department (EPD) also showed that smog and atmospheric pollution level in the city remained in an ‘unhealthy’ range with Air Quality Index (AQI) of 182 in city and 269 in Wagha Border area.

On the other hand, to rein in air cleaners’ prices and minimise adverse effects of incessant smog, the provincial government has requested the federal government to waive duty and taxes on import of air cleaners, face masks and scribes used for safety in smog.

Similarly, international air quality monitoring agency, AirVisual, monitors indicated AQI readings between 159 and 230 in different areas of the provincial metropolis. It recorded atmospheric particulate matter (PM2.5) reading of over 141.2 µg/m³, which means that Lahore’s air is highly contaminated with very fine particles of dust and harmful other elements of less than 2.5 micrometres as the safe limit for PM2.5 is between 0 and 35.

PM2.5 particles have the tendency to stay longer in the air due to their small size and lightweight and increase chances of humans and animals inhaling them into their bodies because particles of such small diameter can bypass nose and throat and penetrate deep into the lungs and some may even enter the circulatory system.

Health experts warn that the incessant smog is putting every resident’s health at risk and people are facing more problems with each passing day.

They have observed that smog was causing eye, viral infections and chest congestions to citizens. Most of the patients in hospitals are suffering from the aforementioned diseases.

Presiding over a meeting, Punjab Finance Minister Hashim Jawan Bakht highlighted a summary has been forwarded to the federal government for removal of duty and taxes on air cleaning products and masks. 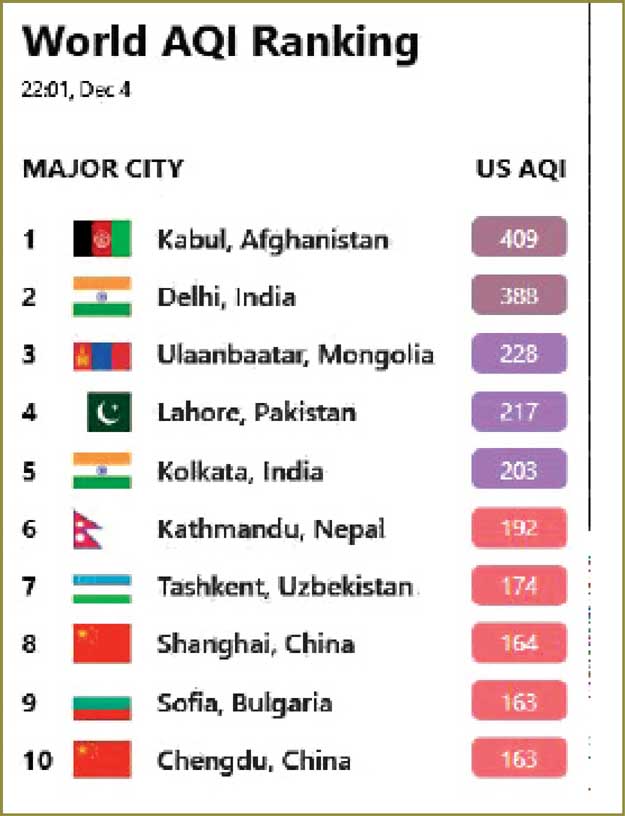 “The provincial government is ensuring the provision of financial assistance for the installation of clean production technology in industries causing pollution and promotion of green investment through Punjab Green Development Programme,” the minister said. “For this purpose, the World Bank has been taken into confidence.”

The procurement of the latest monitoring equipment for the environment protection department and the establishment of green buildings is being ensured as well.

Along with it, a consultative system is being introduced to ensure public participation and projection of environment-related information.

The draft regulatory act has also been formulated for the eradication of polythene bags and the use of disposable plastic items and the draft act would be presented to the legislative committee of the Punjab cabinet for approval in the next few days, he added.

The provincial minister maintained that people should be sensitised about the hazardous effects of environmental pollution, the use of precautionary measures and the steps being taken by the government so that no hurdle could be created in administrative action against the delinquents.

The minister said not only India is responsible for the prevalent situation of smog in Lahore but local public and private transport, burning of crops’ residual and the smoke emitting from factories and brick-kilns have a major part in it. The government and people have to work jointly to control it, he added.

The minister directed the Environmental Protection Department to recruit professionals to expedite its organisational efficiency and the services of the World Bank should also be solicited for the procurement of the latest machinery.