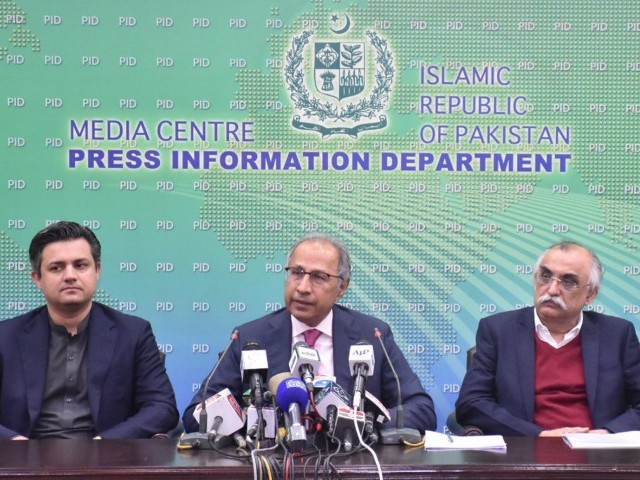 ISLAMABAD: The government on Tuesday disclosed that it was looking to revive the executive magistracy system in the country that was wrapped up by General (retd) Pervez Musharraf’s regime in 2001.

“We are in talks with the federating units to revive the old system to check hoarding and price hike,” said Economic Affairs Minister Hammad Azhar while addressing a news conference in the federal capital.

He was accompanied by Adviser on Finance Hafeez Shaikh and Federal Board of Revenue Chairman (FBR) Shabbar Zaidi.

In the absence of an appropriate price control mechanism at the local government level, the provinces have been facing problems in tackling the sky-rocketing prices.

“The persistent double-digit food inflation is because of seasonal supply shocks, disruption of trade with India and failure of the administration in the provinces,” said Azhar.

The cabinet members showcased their economic achievements after the international credit rating agency, Moody’s, on Monday had upgraded Pakistan’s economic outlook from ‘negative’ to ‘stable’.

The minister said that federal government was in contact with the provinces to review the possibility of reviving the magistracy system as hoarding was also one of the factors behind high inflation.

In 2001, the magistrates were replaced with district coordinating officers whose job was restricted to coordination between different offices in their respective districts.

District magistrates had powers to hear criminal cases except those in which death sentence or life imprisonment were given. Each magistrate looked after two police stations.

However, during the tenure of General Musharraf, these powers were distributed among the police, the judiciary and the executive.

When the executive powers were taken away from magistrates, there was no authority to check unbridled price hikes and profiteering or to impose penalties on the violators.

Meanwhile, the Pakistan Bureau of Statistics (PBS), which now works under Ministry of Planning being headed by Asad Umar, has once again failed to timely publish the monthly inflation figures.

Till a few months ago, the PBS would regularly publish the Consumer Price Index on first working day of every month. However, the PBS has not yet released the inflation number for the month of November. The inflation is expected to jump further from October’s reading of 11.6%.

Azhar hoped that inflation would start receding from January next year, which may also provide a room to cut the key discount rate of 13.25%.

“After the World Bank, Asian Development Bank and International Monetary Fund, Moody’s has now appreciated Pakistan, which is a matter of pride for the county,” Shaikh said.

To a question about similar positive reports issued by these institutions during Ishaq Dar’s time, Shaikh said that the Pakistan Tehreek-e-Insaf (PTI) government was different from the Pakistan Muslim League-Nawaz (PML-N) as it did not have any vested agenda.

The finance adviser said that the international institutions would give positive reports as long as the government remained on the right track.

He said that even during the last government tenure, these financial bodies furnished positive reports till the time the government was performing on the economic front.

“It is a merit-based government that gives preference to national interests over personal interests,” Shaikh declared.

However, the finance adviser ducked a question on Moody’s forecast that Pakistan would miss the current fiscal year’s budget deficit target of 7.1% of Gross Domestic Product.

“Everyone should accept that the primary balance – the expenditures excluding interest payments was in surplus and the government would try to maintain this balance,” he observed.

Defending the 13.25% interest rate, Shaikh said that it was kept high to contain inflation despite the criticism of the business community.

Federal Board of Revenue (FBR) Chairman Shabbar Zaidi said that the board had started paying sales tax refunds to the exporters.

He said that during the first four months, the textile sector exporters had filed Rs25 billion worth of claims but submitted the requisite forms only against Rs10 billion refund claims.

“Out of Rs10 billion, the FBR has already paid Rs5 billion worth of sales tax refunds,” he stated.

The economic affairs minister said that the government had achieved the stabilisation and after a few months, it would enter into a phase of high economic growth.

However, the economic growth rate would be near 3% in the current fiscal year – a figure that is slightly lower than what Shaikh had recently expected to achieve.