KARACHI: Jawaharlal Advani, a Hindu residing in Karachi, has vivid memories of Dec 6, 1992, when a charged Muslim mob, calling for revenge, was marching towards country’s famous Shri Swami Narayan temple.

The mob was in a fit of rage after a Hindu mob had demolished the 16th-century Babri Mosque, in nearby India.

Advani together with other staff and worshipers at the temple were not sure about their fate.

“It was a horrific scene. Thousands of charged people were trying to enter the temple premises. But Thanks to the army and local Muslim community that helped and held them off,” Advani told Anadolu Agency.

He added: “No damage to life or temple’s infrastructure occurred due to the army’s swift action.”

In Pakistan, some 30 temples were attacked, 25 of them across Sindh, where 85% of the Hindus in Pakistan live. Since then all these temples have been either rebuilt or repaired.

In India, then Prime Minister P V Narasimha Rao had also pledged to rebuild the Babri Mosque, in a televised address to the nation.

Anand Ram Hotwani, the caretaker of Shri Swami Narayan temple, no longer foresees any violent reaction from Pakistani Muslims on the 28th anniversary of the demolition of Babri Mosque on Dec 6. But he had feared recurrence of riots on Nov 19, when Indian Supreme Court handed over the site of Babri Mosque to Hindus. 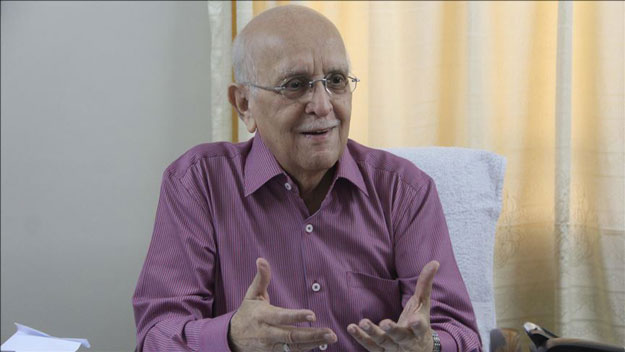 On Nov 19, Ram Nath Maharaj had arrived at the Shri Panchmukhi Hanuman temple in Karachi to oversee preparations for routine Saturday prayers.

“I feared similar riots, imagining angry mobs attacking the temples, and beating us up. I kept praying and making calls to my family members and friends to be careful, and do not come out of homes. But thank God, nothing like that happened,” he said.

Before he entered the premises, he noticed the deployment of extraordinary security around the temple.

Maharaj, the caretaker of the 1,500-year-old temple, entered the premises and started to prepare for the prayers.

But shortly afterward, he came to know that the Indian Supreme Court had handed the site of the historic mosque to Hindus for the construction of a temple.

“It came like a bombshell to me as I was away from television for the last few days due to some special prayers. It just reminded me of the grim memories of 1992 when Babri Mosque was demolished triggering violence against Hindus here,” Maharaj 45, who with his Muslim and Christian friends took part in relief activities for those affected by the riots, told Anadolu Agency.

Hindu nationalists gathered at the disputed site on Dec 6, 1992, and destroyed the mosque named after Mughal Emperor Babur. Around 2,000 mostly Muslims were killed in communal riots across India.

“Not even a single temple or Hindu was attacked after the Indian Supreme Court’s verdict. Thanks to local (Muslim) community, law enforcing agencies, and on top of all, the religious leadership, that did not exploit the judgment to incite Muslims against Hindus,” he added.

“If I compare the two situations, there is simply no comparison. In 1992, there were riots, fear and bloodshed but in 2019, there is nothing like that,” said Maharaj.

Hotwani, said that things have gradually changed in the past 28 years in Pakistan.

“Increasing literacy compounded by the government and media role, have made even many of those who were involved in violence [against Hindus] in 1992, that this [violence] is not in favour of Pakistani society,” Hotwani, a former judge, told Anadolu Agency.

“We are carrying out our routine activities without fearing any reaction on Dec 6,” he said, sitting in his small office adjacent to the temple, which was attacked in 1992.

Contrary to other Hindus, Hotwani did not bother about security on Nov 9.

“I did not even request security. However, the police beefed up security around the temple at their own to avert any untoward incident.”

Advani, a member of the temple’s managing committee, said it would be unjust not to mention local Muslims, who thwarted attacks and ensured safety of Hindus.

“They (Muslims) offered us their houses to take shelter. Even, their women came up to save our women,” he said.