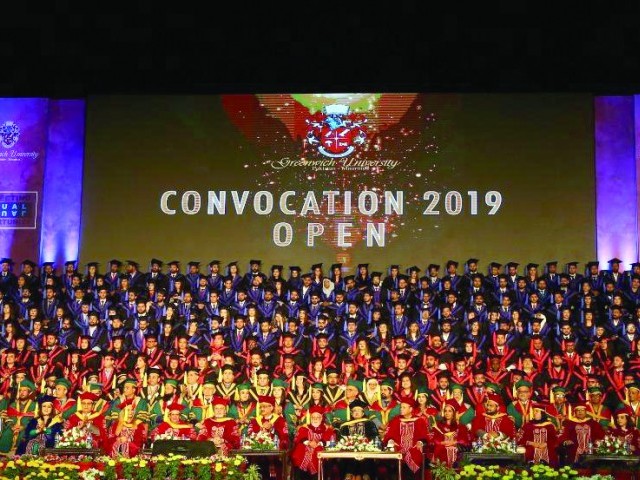 As many as 349 students of MPhil, PhD, Bachelors and Masters were conferred degrees on Saturday. Photo: Express

KARACHI: Greenwich University held its 14th convocation on Saturday. Degrees were conferred upon 349 students of MPhil, PhD, Bachelors and Masters. Around 21 students were awarded gold medals at the ceremony.

Among the graduates were foreign students from Madagascar, Mauritius, Nepal and Nigeria. This was the first time that students of Greenwich University’s Mauritius Campus were also awarded degrees here. The national anthems of both the countries were performed by bands of the Pakistan Navy.

Speaking on the occasion, Vice-Chancellor of the varsity, Seema Mughal, said that the varsity would keep playing its role in promoting education despite geographical and cultural limits.

Female alumni of the varsity also addressed the audience and spoke about their achievements post-graduation. Besides, the event was attended by parents, ambassadors and political leaders.