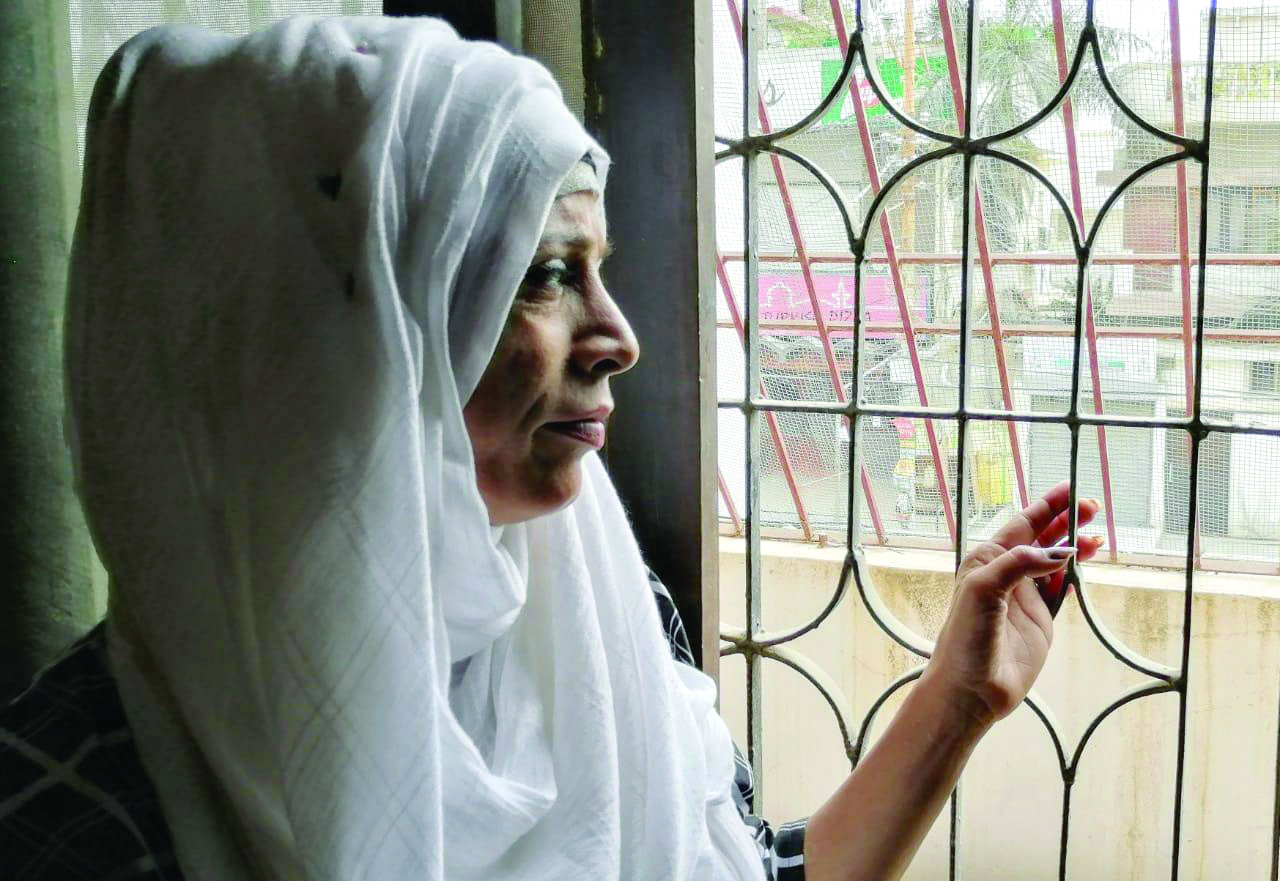 For much of her life, Rubina has struggled with a disease that left her isolated. Today, she counsels others going through the same ordeal. Photo: Express

KARACHI: Many were left stunned and others terrified as the news of HIV outbreak in Larkana made headlines earlier this year. They trembled in fear at the implications that the epidemic entailed, yet failed to realise that a large number of people have been experiencing the agony, distress, marginalisation, and ignorance that come with HIV first-hand for many years. Their misery was largely overlooked by most.

However, all hope was not lost. There were still people like Rubina.

Rubina works for a non-governmental organisation (NGO), Umeed Centre, as a volunteer. She counsels HIV patients and their families, works to raise awareness about the conditions and extends a helping hand to those who have lost all hope, inspiring them to battle the affliction head-on.

At the age of 38, she appears healthy and fit, having a positive outlook towards life. Hence, when one meets her for the first time, it is virtually impossible to tell that she herself is a patient of HIV.

As a teenager, she aspired to study and carve out a career for herself, though the dream remains unrealised, mainly due to lack of financial means.

Rubina still remembers spending her childhood and early teenage years in a cramped dwelling, which accommodated her family of 14, including her parents and 11 siblings. Making ends meet was a challenge back then and her father, who was employed at a telecommunications company, used to sell vegetables on a pushcart after work. Later, they shifted to a servant quarter at a bungalow in Defence Housing Authority, where her mother worked.

Meanwhile, Rubina, along with her other siblings, continued to attend a government school but discontinued her studies at the age of 16, when she was married off to a drug addict. That was the beginning of her turmoil.

Pay the price for husband’s sins

Life became even harder for her after marriage. In addition to poverty, which she had faced all her life, Rubina was now subjected to physical abuse by her husband. She was forced to work to run the household. Initially, she made wooden pegs but that wasn’t enough. Consequently, she found herself burdened with debt. In the meantime, her parents and siblings had cut off links with her owing to her husband’s addiction. As she grappled with challenges on multiple fronts, it was revealed to her that her husband suffers from HIV.

In 2006, she had admitted her husband to a rehabilitation centre in Sanghar, where he tested positive for HIV. Rubina revealed that she was kept in the dark by her husband’s family, who knew of his condition. By then she had four children, said Rubina, adding that she often fell sick, was rapidly losing weight and would frequently develop high fever.

It was only after she stealthily managed to take away her husband’s medical reports to her parents’ house, who had shifted to another place, that she came to know about her husband’s condition. Her mother asked her landlord to read the reports who told Rubina that her husband had tested positive for HIV. He also asked Rubina’s mother to get her screened for HIV, following which she too tested positive.

There began her journey towards isolation, misery and distress. Survival was harder than ever and she was afflicted by various diseases and ailments, one after the other.

In those hard times, it was only her parents and siblings who stood by her, supporting her during the course of her treatment at various public hospitals. Meanwhile, her husband, who had abandoned her, passed away and her children, who were living with her in-law, were barred from meeting.

At the time, Rubina was undergoing treatment at a special ward, dedicated for HIV patients, at Dr Ruth Pfau Civil Hospital. After she was discharged, her in-laws refused to let her live with them and her parents’ landlord too restricted them from allowing Rubina inside their house.

There was no way out for Rubina from the mess her life had turned out to be.

It was then that she met Dr Salim Azam, who works for the welfare and rehabilitation of HIV patients and drug addicts. He encouraged her to start her life from scratch again, giving her hope and strength. His encouraging words and support resulted in Rubina battling her way through the challenges of life and emerging victorious.

She joined an NGO, Umeed Centre, as a volunteer and since then has been counselling HIV patients and working to raise awareness about the condition. Every three to four months, she organises an awareness session, which is attended by around 150 HIV patients. During these sessions, she counsels and inspires people to not give up hope and continue fighting the disease.

The problem and the solution

According to Rubina, HIV doesn’t only entail health issues but also social problems. She laments that people isolate these patients and fail to empathise with them. Infact, they make life even harder for them than it already is, she said.

“Staff at hospitals hesitate to touch HIV patients and they are often subjected to hate,” she said.

Speaking about the rapid increase in the number of HIV cases, Rubina said that the virus is mainly carried by drug addicts and sex workers. Additionally, at times people are in denial and refuse to acknowledge that they have developed the condition, fearing marginalisation, which too results in the disease’s spread, she said.

“They fear that they will lose their jobs and relationships if they disclose their condition,” added Rubina.

According to Rubina, the government needs to take effective measures for curbing the spread of HIV as well as drug addiction. They need to establish more rehabilitation centres and initiate awareness campaigns. She also stressed the need for including information about HIV and relevant treatment in curricula at schools and colleges.

But most importantly, the staff at the hospitals needs to be trained to treat HIV and AIDS patients respectfully, so that they stop fearing the consequences of talking about their disease, find it easier to undergo treatment and lead a fearless life, Rubina said.

Sindh lights up in celebration of culture day