Group F will be comple­ted by one of the winner­s of the play-offs to be played next March
By AFP
Published: December 1, 2019
Tweet Email 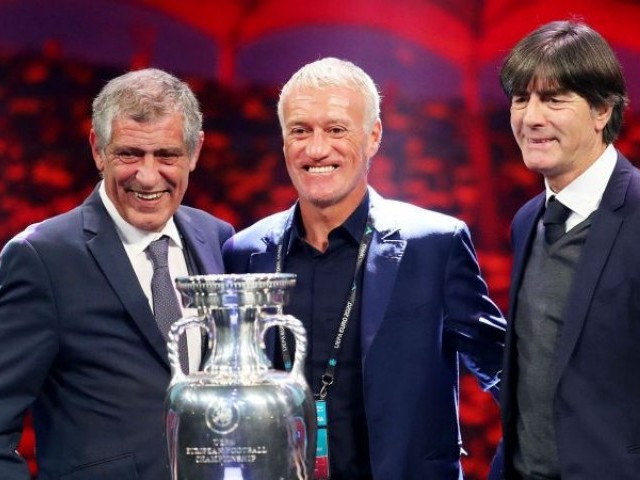 Group F will be completed by one of the winners of the play-offs to be played next March. PHOTO: AFP

BUCHAREST: France face a major hurdle if they are to add the European Championship to their World Cup crown after coming out in the same Euro 2020 group as Germany and reigning European champions Portugal in Saturday’s draw in Bucharest.

Neither France nor Portugal were in Pot One for the 24-team competition being held in 12 cities across Europe, making them the dangerous teams to avoid for the top seeds.

In the event, they were all put together in a high-calibre Group F alongside Germany, who will play all their group games in Munich. That is where Joachim Loew’s team will face France in their first match on June 16 and then Portugal on June 20.

“It is the hardest group, but we must accept it. It means we will have to be ready right away,” said France coach Didier Deschamps.

Group F will be completed by one of the winners of the play-offs to be played next March, leaving open several possibilities including Hungary, who will play two games in Budapest should they make it.

France beat Germany in the semi-finals of Euro 2016 on home soil, before slumping in the final against Portugal.

With the four best third-placed sides all going through, it is very possible all three will progress to the last 16, but Loew is in no doubt France — who followed their 1998 World Cup triumph by winning Euro 2000 — are the strongest team.

“They are the world champions and have been getting stronger for the last three or four years. They are the group favourites,” he said.

Meanwhile, England were drawn with Croatia and the Czech Republic in Group D, with Gareth Southgate’s team to play group games at Wembley, which will also host the semi-finals and the July 12 final.

That group will be completed by the team to emerge victorious from Path C in the play-offs — either Serbia, Norway, Israel and Scotland. The latter have the added incentive of knowing they will play two games in Glasgow in the group stage should they qualify.

England faced the Czechs in qualifying, winning 5-0 at Wembley but suffering their only defeat of the campaign in Prague, losing 2-1 in October.

England will kick off at home to Croatia on June 14 in a repeat of the 2018 World Cup semi-final, which was won by the Croatians.

However, should England win their group they will have to play the Group F runners-up, setting up a possible clash with Germany, France or Portugal in the last 16.

Even if they win that, the draw is such that they could end up facing Spain in the quarter-finals.

When asked about the advantage of playing at Wembley, Southgate said: “Obviously eight or 10 teams have the advantage of home group matches, and we have only ever been to one semi-final so that doesn’t become an advantage unless we get through two very complicated knockout matches as well. That is a long way down the line.”

Southgate famously missed a penalty when England lost to Germany in a shootout at Wembley in the Euro 96 semi-finals, the last time they played a match at home in the tournament.

Italy will face Turkey in Rome in the tournament’s opening game on June 12, with Switzerland and Euro 2016 semi-finalists Wales also in that section, Group A.

Wales will play two matches in far-flung Baku, starting with Switzerland on June 13. They played there this month, and won, against Azerbaijan in a qualifier.

“Obviously come the championships it will be six or seven months down the line but we know what to expect, the facilities were fantastic there, and I think it’s also great for the fans that they have got two games there,” said Wales boss Ryan Giggs.

Spain will play Sweden and Poland as well as a play-off winner in Group E, with Luis Enrique’s team playing in Bilbao.

Finland will face two hosts, Denmark and Russia, as well as much-fancied Belgium in Group B at what will be their first Euro.

The Netherlands, on the rise after missing Euro 2016 and the last World Cup, face Ukraine and Austria along with another play-off winner in Group C.

Saint Petersburg, Copenhagen, Amsterdam, Bucharest and Dublin will also host matches after UEFA decided to spread the Euro across the continent to mark the 60th anniversary of the first tournament in 1960.