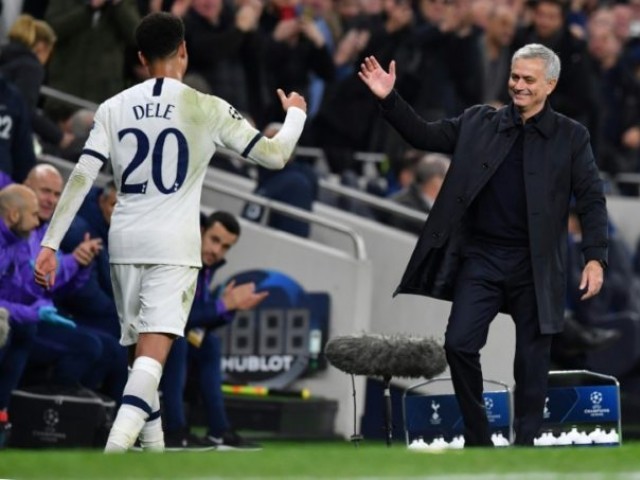 LONDON: Jose Mourinho revelled in his role as Tottenham came from two goals down to beat Olympiakos 4-2 to reach the last 16 of the Champions League on his first home match in charge on Tuesday.

The Portuguese introduced Christian Eriksen for Eric Dier just 30 minutes in after seeing his side fall behind to goals from Youssef El Arabi and Ruben Semedo.

Dele Alli pounced on a horrible defensive mistake to breathe new life into Spurs before the break and a second-half double from Harry Kane either side of Serge Aurier’s fine strike completed the comeback.

“My feeling was great, especially because it was one of these matches where I had to play,” said Mourinho.

“Some matches you play before the match. You prepare the team, you work, you train, then the game starts and your action during the game is not very important. In other matches you have to play and I had to play.

“Apart from an awful feeling in relation to Eric, everything was great.”

Last season’s Champions League finalists can now look forward to the knockout stages for a third straight season, but will go through in second behind Bayern Munich in Group B after the German giants secured top spot with a 6-0 thrashing of Red Star Belgrade.

Spurs have now scored seven goals in winning Mourinho’s first two games in charge to make a good first impression on many supporters unconvinced by the appointment of a former Chelsea manager renowned for a more conservative style of football.

However, the first 20 minutes showed the work Mourinho has ahead to make Tottenham as tight at the back as his most successful sides over the past two decades.

El Arabi was afforded plenty of room on the edge of the box to line up his shot and find the bottom corner after six minutes before more sloppy defending allowed Semedo to prod home from a corner.

Mourinho had seen enough inside the first half-hour to make a change as Dier was sacrificed to make way for Eriksen.

“It could have been any of us to come off in that first 20 minutes but thankfully the sub worked,” said Alli.

However, it was a huge error from Olympiakos rather than a moment of inspiration that gifted the hosts a route back into the game.

Aurier’s low cross from the right should have been easily cleared by Yassine Meriah, but he let the ball slip under his foot and Alli was on hand to tap in at the back post in first-half stoppage time.

Five minutes after the restart, Spurs were level as Aurier’s throw-in freed Lucas Moura down the right and his cross was swept home by Kane.

However, it was a ball boy who fed Aurier quickly who received special praise from Mourinho.

“To do that you have to be a very good ball boy,” added the Portuguese. “He’s there living the game and playing the game very, very well.”

Aurier was the unlikely hero 17 minutes from time as he sweetly connected with Alli’s cross at the back post to put Spurs in front.

And Kane put the seal on morale-boosting second half when he stooped to head home his 23rd goal of the season in as many games for club and country.

“We know that and did not come out with any energy and they got the two goals and put us under pressure, it was an uphill struggle but we got the goals and it feels good to qualify,” said the England captain.

“It was about qualifying, no matter how we did it.”