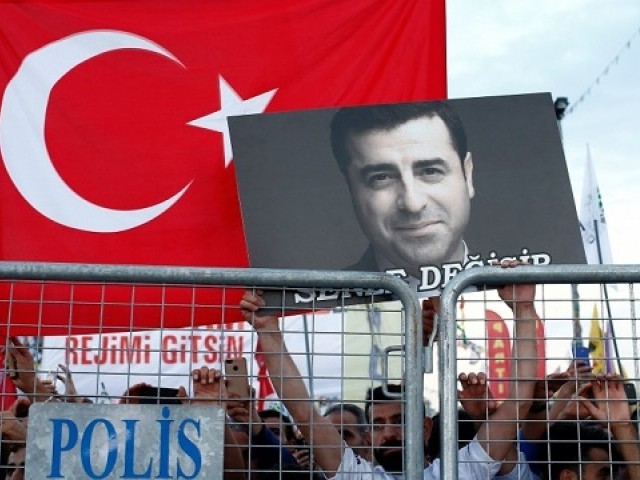 ISTANBUL: Turkey’s pro-Kurdish opposition party called on Wednesday for an early election but ruled out withdrawing from parliament to protest the government’s dismissal of dozens of its mayors who were elected earlier this year.

Authorities have removed 24 mayors of the Peoples’ Democratic Party (HDP) since August, mainly due to alleged links to terrorism, and appointed replacements to run their municipalities.

Several members of the HDP had called for the party to with draw from the national parliament or from local assemblies which the party still holds.

The HDP said in a statement that President Tayyip Erdogan’s AK Party and its ally, the Nationalist Movement Party (MHP), were “stealing the will of the peoples” by appointing trustees.

Erdogan threatens to ‘open the gates’ to Europe for migrants

“We say ‘early election’ for the peoples of Turkey to be rid of the AKP-MHP authority. This is a call for confrontation.

We’re saying bring it on,” the party said. “We call on all of the opposition to unite around this request for an early election and to take action,” it said, also appealing for a campaign of civil disobedience.

The HDP has previously complained about a lack of opposition solidarity. The party ruled out withdrawing from national parliament or local assemblies, saying it had paid “heavy prices” to achieve gains and “will not withdraw from any area of struggle”.

Erdogan and his AK Party accuse the HDP of links to the outlawed Kurdistan Workers Party (PKK), which has led a separatist insurgency since 1984 in which some 40,000 people have been killed. The HDP denies any links to terrorism.

Hundreds of the HDP members, including its lawmakers and former co-leaders, have been put on trial on terrorism charges and many of those have been sentenced to jail.

The HDP has been the only party in the Turkish parliament that opposed Turkey’s offensive in northeast Syria against the Kurdish YPG militia that began on October 9.

US consular staff in Turkey grilled over video ‘mocking Zamzam’