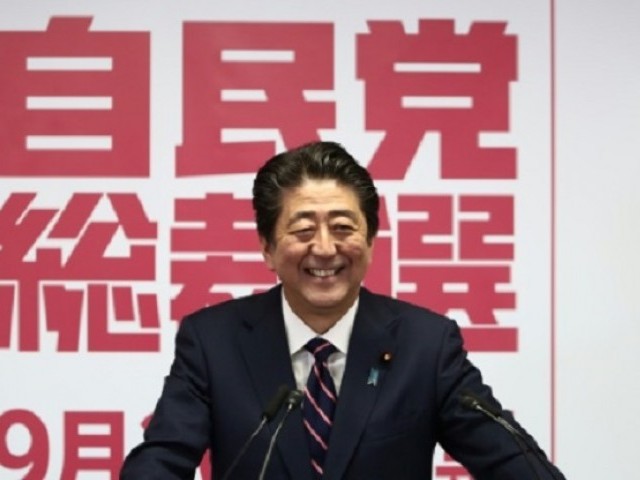 TOKYO: Shinzo Abe, who became Japan’s longest-serving premier on Wednesday, was groomed for politics from birth and has cemented his power with shrewd diplomacy, unwavering nationalism, and a knack for surviving scandal.

At home, he has championed an economic drive that carries his name — Abenomics — while abroad he has sought to curry favour with powerful leaders, especially US President Donald Trump.

“Abe’s tenure has made Japan an island of political stability even as other advanced industrial democracies have suffered from weak, unpopular, or short-lived governments over the course of the decade,” noted Tobias Harris, an analyst at Teneo.

The latest in a long line of politicians — his father was a foreign minister and his grandfather a prime minister — he has been criticised at times as arrogant.

But he has also shown the ability to rise from the ashes, reviving his career after a devastating first term in office cut short by political strife and personal illness.

And he has not been above poking fun at himself either, dressing up as Super Mario to give a zany preview of the Tokyo 2020 Olympics, and scoring mock tries in a video ahead of the Rugby World Cup.

On the international stage, he has worked hard to build a close personal relationship with Trump in a bid to protect Japan’s key alliance despite the US president’s “America First” mantra.

He famously visited Trump in his glittering New York tower before the tycoon was even sworn in to the White House. The two leaders have since forged personal ties at summits and on golf courses.

Abe has also cosied up to Russia’s Vladimir Putin and tried to heal ties with China, with leader Xi Jinping expected on a key state visit next spring.

This year he has burnished his image at major events ranging from the G20 meeting in Osaka to ceremonies for the enthronement of a new emperor.

But he has faced a string of political scandals — the most recent a cronyism row that forced his government to scrap a long-running annual cherry blossom party.

His nationalist views have at times infuriated neighbours still scarred by Japan’s wartime military aggression, and his stated dream of reforming the constitution to strengthen the role of the military is viewed with deep suspicion in the region.

In 2013, he visited a controversial war shrine, sparking anger around the region and a diplomatic slap on the wrist from a “disappointed” US.

Since then he has avoided the site, but he has not relinquished his constitutional reform plans and has pursued a hard line on a diplomatic spat with South Korea over wartime-related disputes.

Abe joined Kobe Steel two years after graduating, but it was a short-lived detour from his political destiny and he soon followed in his father’s footsteps.

Founding his political career on tough talk against North Korea, he became Japan’s youngest-ever prime minister when he took office in 2006 at the age of 52.

But he resigned after just a year, hit by scandals and debilitated by colitis.

In 2012, he made a shock political comeback, returning to office on a pledge to revive Japan’s economy, the world’s third biggest, with government spending coupled with massive monetary easing and red-tape cutting — the so-called “Abenomics” policy.

He has made the economic drive a signature of his tenure, along with ambitious plans to boost the country’s flagging birth rate by making workplaces more friendly to parents, particularly mothers.

Man on a mediation mission: Japan’s Abe heads to Iran

He pushed ahead this year with a controversial hike in consumption tax that will fund plans including free nursery schooling for children aged three and older, as well as contributing to Japan’s growing social security bill.

He is now set to stay in power until September 2021 when his party presidency term ends, but there is no constitutional limit on the length of a premiership.

Abe has said he was encouraged to seek a path back to power by reading a biography of Winston Churchill entitled: “Never Despair.”