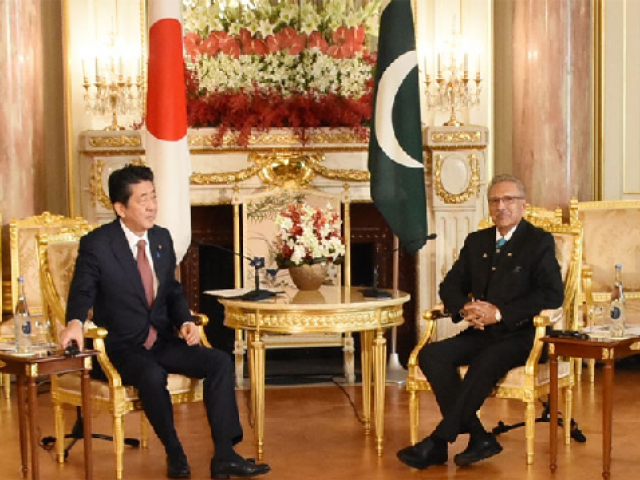 President Dr Arif Alvi on Wednesday called for greater collaboration between Pakistan and Japan in the fields of investment, trade, human resource development and people-to-people contacts.

Dr Alvi was in Japan to attend the enthronement ceremony of the Japanese emperor on Tuesday. Alvi spent a busy day on Wednesday, meeting Prime Minister Shinzo Abe and attending a luncheon hosted by representatives of leading Japanese business corporations and addressing the Pakistani community in Tokyo.

Talking to Prime Minister Abe, Alvi said that with a young Pakistan – having 60% of its population below the age of 30 – and a greying and shrinking population in Japan, the two countries could exploit the potential to benefit their economies.

The president expressed his heartfelt condolences on the loss of precious lives caused by the recent Typhoon Hagibis in Japan. He felicitated the prime minister on the enthronement of the Emperor of Japan and hoped that the new Japanese era “Reiwa” would bring more prosperity and well-being for the friendly people of Japan.

He also mentioned the worsening situation of human rights in the Indian-Occupied Kashmir and requested the prime minister to impress upon India to restore the fundamental human rights of the Kashmiris.

Prime Minister Abe expressed his gratitude to President Alvi for attending the coronation ceremony and expressed hope that such exchanges would help enhance the relations between Japan and Pakistan.

Meanwhile, speaking at a working luncheon meeting hosted by the Japan-Pakistan Business Cooperation Committee (JPBCC), Alvi said that with a liberal investment policy, Pakistan offered tremendous opportunities for the Japanese companies to take advantage of the conducive environment.

The JPBCC delegation was headed by Adviser to the Marubeni Corporation, Koichi Yajima. Representatives from leading Japanese business corporations, including Marubeni, Toyota Motors, Suzuki Motors, Mitsubishi, Sumitomo, Sojitz, Universal Metals and Mitsui, were among those present in the meeting.

According to a press release issued by the President’s Media Office, Alvi highlighted the initiatives of the present government to overcome the economic challenges through peace-oriented, investment-friendly, development-focused and people-centered strategies.

Appreciating Japan’s role as a premier development partner, he stated that Pakistan was ready to welcome Japanese businesses in all the sectors of the economy. The president offered Japanese companies to invest in special economic zones to cater not only to the big Pakistani market but the wider region also.

Yajima and the other business leaders acknowledged the economic credentials of Pakistan and expressed a strong desire of the JPBCC to make practical efforts for boosting trade and investment relations between the two countries.

Earlier the president visited the headquarters of NEC, a Japanese multinational information technology and electronics company, where he was briefed on the latest technologies being promoted by the NEC as well as the company’s plans for future investments in Pakistan.

Separately, a delegation of Japan-Pakistan Parliamentary Friendship League (JPPFL), led by Chairman Seishiro Eto, also called on President Alvi and discussed the scope of strengthening bilateral ties. Alvi appreciated the contribution of the League members in advocating a stronger economic partnership between Pakistan and Japan.

The president mentioned the worsening human rights situation in Occupied Kashmir and sought the support of the Japanese parliamentary leadership in impressing upon India to restore fundamental human rights of Kashmiris.

Eto expressed his deep gratitude to the president for awarding him the Hilal-i-Pakistan.

He underscored that the president’s visit to Japan would give an impetus to this bilateral relationship. The two sides agreed that the parliaments of both countries should enhance cooperation through increased exchanges and collaboration.

And addressing the Pakistani community at the Embassy of Pakistan in Tokyo, Alvi said that the present political set-up in Pakistan was people-centric and its socio-economic agenda was aimed at bringing job opportunities and economic benefits to the people.

Alvi underlined that necessary instructions had been issued to the Pakistani missions abroad to facilitate/assist the community to address their genuine concerns in an effective manner. The president said Pakistan was seeking a comprehensive partnership with Japan covering political, economic, security and cultural aspects.