The popula­tions on both sides have to do with one of the lowest socio-econom­ic indica­tors in the world
By Syed Akhtar Ali Shah
Published: November 20, 2019
Tweet Email 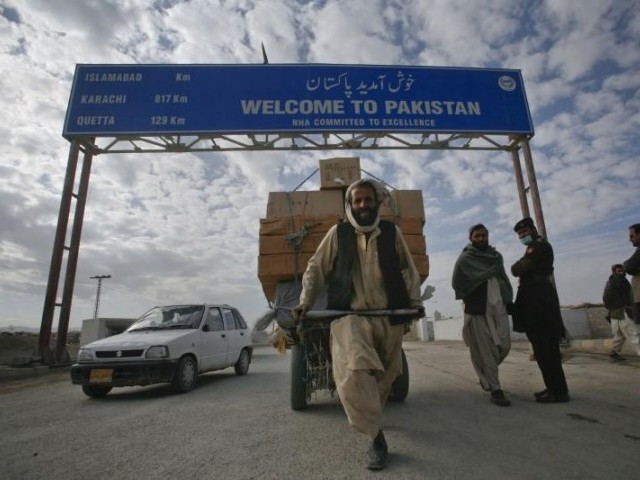 During the 40 long years of conflict in Afghanistan, the superpowers and other actors might have reaped certain benefits in pursuit of their objectives, but people on either side of the Durand Line have enormously suffered the traumas of war. While the superpowers have been playing their own games on the chessboard of the world politics checkmating each other, the melodrama has also created misperception and mistrust, even among the people left with deep scars from the war. These scars are evident in their local poetry, music, songs, novels, short stories, and folklores. Pakistan and Afghanistan, having shared boundaries, are entangled in certain unnecessary issues at the cost of the socio-economic development of the people.

The populations on both sides have to do with one of the lowest socio-economic indicators in the world. At the moment their survival is at stake as they are caught in the middle of blazing guns of the state and the violent non-state actors. There cannot be two views on the fact that both sides stand at a crossroads of history. Their only burning desire is to have peace and fundamental rights.

The most effective way for minimising the existing trust deficit between the two countries is people-to-people contact. In order to bury the past hatchet, we have to be mindful that while forming an opinion, it is imperative to understand that history plays a decisive role in moulding the psyche of a nation. Once this is comprehended, public opinion on both sides can generate pressure over the policymakers to devise people-centric policies focusing on peace which is imperative for international trade. International trade is the best policy option to create capital and further investment for industrial production on both sides of the border.

People are the most important element of a state. Without people, no state can exist. In fact, in today’s world, all organs of the state exist for the good of the people. Issues of governance revolve around the basic premise of a better quality of life by investing in human capital. Human happiness is now the philosophy of the modern state. The emphasis is on development. Development is now no longer used in a narrow sense and is not merely economic growth or an increase in per capita income but a qualitative change covering the whole gamut of the life of a citizen. Cooperation between Pakistan and Afghanistan can act as a catalyst in addressing the recent challenges of poverty, development and terrorism. If this premise is taken as a paramount plank of policy, then all the emphasis would be on peaceful co-existence and respecting each other’s sovereign status. This requires a major paradigm shift at the strategic level.

The trade between Pakistan and Afghanistan has significant geopolitical and economic importance for both countries. Pakistan has remained Afghanistan’s largest trading partner until 2015 when the trade volume totalled around $3 billion. But due to the spike in political tensions, it dwindled to around $8 million. Comprehending and addressing challenges to the Pakistan-Afghan trade will smoothen the way for establishing peace in the region. Both countries are blessed with one of the most beautiful scenic tourist spots. Afghanistan has been bestowed with an abundance of natural resources ranging from minerals worth more than $3 trillion to various regional fruits. Pakistan has not only been bestowed with industries but also with other raw materials. These resources can be best utilised if the Pakistan-Afghan relations evolve along with economic ties.

The regional scenario also offers the best opportunities for trade. In this context, the China- Pakistan Economic Corridor (CPEC) is a pilot project of the Belt and Road Initiative, which is meant to provide a platform for international cooperation to achieve high quality development in the region while connecting 127 countries. The projects underway will develop industry and infrastructure in the first phase, and in the second phase, CPEC will focus on close cooperation and social livelihood. Involvement in minerals, copper, iron, gas and petroleum (Aynak Copper mine and Hajigak Iron ore deposit) are China’s primary interest. With these opportunities in place, Chinese policymakers are also of the view that they would play a positive role in promoting peace and trade between Pakistan and Afghanistan.

Prime Minister Imran Khan’s announcement to keep the Torkham border open for 24 hours was a good step, but the handling of traders and other travellers by the insufficiently-equipped NLC personnel and Afghan forces gave rise to many grievances. Similarly, allowing Afghan refugees with a Proof of Registration to open a bank account has certainly created goodwill.

The avoidance of war can be done by leading the path of trade and sharing culture. Augmentation of international trade would connect the region into what is a sure recipe for peace.