The crowd cheere­d the Barca star throug­hout and it was the forwar­d who helped his side draw level in the 63rd minute­
By Reuters
Published: November 19, 2019
Tweet Email 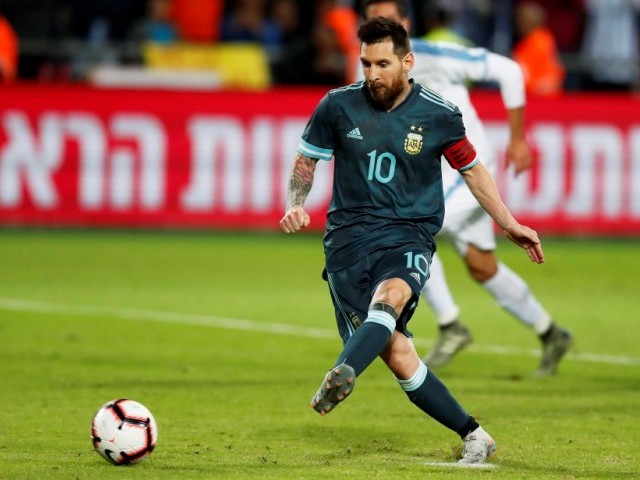 The crowd cheered the Barca star throughout and it was the forward who helped his side draw level in the 63rd minute. PHOTO: AFP

TEL AVIV: Argentina’s Lionel Messi scored an added-time penalty to salvage a 2-2 draw with Uruguay as they twice came from behind in an entertaining friendly match in Israel on Monday.

Argentina, now unbeaten in six games since a disappointing Copa America, had the better of the early play but fell behind in the 34th minute when Edinson Cavani stabbed home from close range after a nice build-up by Luis Suarez and Lucas Torreira.

The crowd in Tel Aviv cheered Messi throughout and it was the forward who helped Argentina draw level in the 63rd. Messi’s free kick from the left was nodded home by Sergio Aguero to put a more realistic sheen on the scoreline for the Argentines, who had been the more positive side throughout.

However, Suarez gave Uruguay the lead again in the 69th when he scored with a powerful 20-metre free kick that flew past goalkeeper Esteban Andrada into the top corner.

But the last word went to Messi who, three days after he missed from 12 yards against Brazil, made no mistake by coolly side-footing home from the spot to secure a deserved draw.

The fixture was the last international for both teams before they begin their 2022 World Cup qualifying campaign in March.