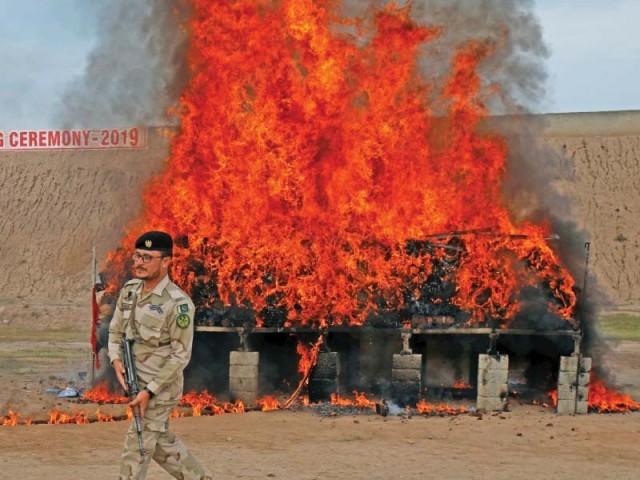 An ANF official walks next to a pile of confiscated drugs which were set on fire during a ceremony in Peshawar. PHOTO: REUTERS

PESHAWAR: For a region which has historically been one of the largest suppliers of opiates, the availability of synthetic drugs has emerged to be the biggest threat to the younger generation, but the government is working on new laws to tackle this menace.

“We are working on new legislation to ensure strict action against synthetic drugs. We will take strict action against the drug mafia whether they have taken shelter in any department, any political party or any section of the affluent society,” said State Minister for States and Frontier Regions (SAFRON) and Narcotics Control Shehryar Afridi while addressing participants of a drug burning ceremony in Peshawar on Thursday.

Afridi stated that Pakistan has been the first line of defence to save the world from the menace of drugs. He also highlighted the sacrifices rendered by officials of the Anti-Narcotics Force (ANF).

Synthetic drugs are the biggest threat for our younger generations and the government is working on new legislation to give severe punishment to drug mafia involved in the illicit business, he said.

The junior minister said there is a need to spread awareness about synthetic drugs as people have little to no knowledge about them.

“Rehabilitation centres need to be established across the country so that those addicted to drugs can be transformed into productive citizens,” Afridi suggested as he proceeded to blame past regimes for ignoring this sector.

“Unfortunately, the previous government did not take any step to improve rehabilitation centres,” he said.

To tackle drug trafficking and money laundering, he said that they have developed a data bank of such criminals.

He highlighted that drugs pose not only a danger to the youth but also to the future of the country which is banking on its youth bulge.

“Pakistan is blessed as it is the only of few countries where 65 per cent of the population is young,” he added.

Afridi called on the academia and educationists to play a leading role in creating awareness about synthetic drugs and to save them from the menace.

“We are fighting a war on drug peddlers and we will make them an example,” he said adding that they are fighting for the future of the upcoming generations.

“Only mothers can understand the pain and agony of those mothers whose sons and daughters have fallen victim to drugs,” Afridi said, adding that his ministry is also launching a mobile phone application to spread awareness on drugs.

“Pakistan will take care of drug-addicted patients and will provide rehabilitation facilities to them to make them productive citizens,” the minister promised.

Students from various institutions took part in a painting contest while students also presented a skit on the harmful impacts of drugs.

He added that over 16 tonnes of narcotics were torched during the calendar year while ANF Peshawar registered 344 cases so far this year, confiscating assets worth Rs52.677 million.

Separately in a statement, ANF Peshawar said that they had arrested Doha-bound, Kurram Tribal District resident Islamuddin at the Bacha Khan International Airport (BKIA) in Peshawar and recovered 3.27 kilogrammes of hashish concealed in a fruit box.

In another operation, ANF Peshawar arrested Khyber Tribal District resident Mujahid at the Shin Qamar check-post and recovered 1.5kg of hashish from his possession.

In a third operation, ANF intercepted a car at the Motorway Toll Plaza in Peshawar and recovered 1.2kg of hashish. The two occupants of the vehicle, Bahawalnagar residents Muhammad Masood and Muhammad Asif, were arrested. Separately, ANF arrested Azeem Khalid, a resident of Mandi Bahauddin and recovered 1.2kg of opium and 1.2kg of hashish from his bag while searching a passenger van at the Motorway Toll Plaza.

ANF intercepted a Hiace on the Peshawar-Dera Ismail Khan road and recovered 20.4kg of hashish from concealed cavities of the vehicle. Two people on board, identified as North Waziristan Tribal District residents Sayedul Rehman and Raheemullah were arrested.

A rickshaw was intercepted by ANF from Umar Gull Road in Peshawar and nine kilogrammes of hashish, concealed in the rear seat of the rickshaw, was recovered. Peshawar resident and driver of the rickshaw Fida Hussain was arrested.

ANF arrested Nowshera resident Amjid Khan at BKIA and recovered 1.19kg of heroin concealed in tea packets. He was travelling to Saudi Arabia.