ISLAMABAD: The government and the Sharif family on Wednesday failed to break a deadlock over the removal of former prime minister Nawaz Sharif’s name from the no-fly list as the former refused to relent on its conditions triggering an angry snub from the PML-N.

The government has decided to grant the Sharif family patriarch a “one-time” permission to travel abroad for medical treatment for a period of four weeks provided he submits an indemnity bond to the tune of Rs7-7.5 billion, Law Minister Farogh Naseem told a news conference following a meeting of the cabinet’s subcommittee tasked to decide the matter.

According to a memorandum issued by the interior ministry’s ECL section officer, Nawaz could travel abroad subject to the furnishing of an indemnity bond of “£8 million or equivalent in rupees, $25 million or equivalent in rupees and Rs1.5 billion” by the former premier or his brother Shehbaz Sharif “in favour of and to the satisfaction of the interior ministry’s additional secretary”. 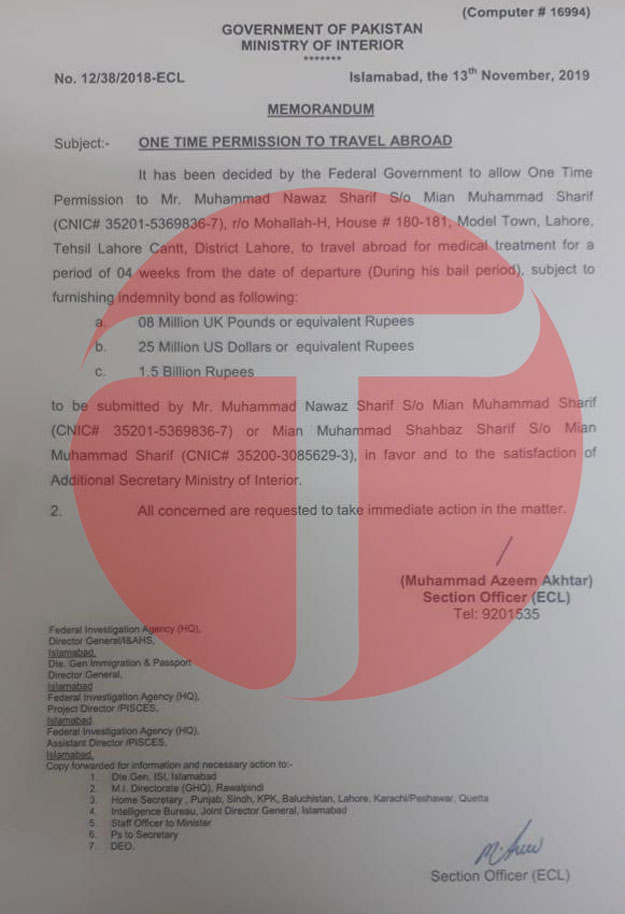 However, the PML-N was quick to reject the government’s terms, describing the decision as “discriminatory” and “based on political vindictiveness”.

“The government has fulfilled its duty and the onus is now on the PML-N,” the law minister told media persons at the presser where the PM’s aide on accountability, Shahzad Akbar, was also present.

The announcement came after Naseem presided over a consultative meeting of the cabinet’s subcommittee to finalise its recommendations on removing the 69-year-old PML-N supreme leader’s name from the Exit Control List (ECL).

“This case is different from that of [former military ruler] Pervez Musharraf as he was not convicted at the time his name was struck off the ECL,” the law minister said.

He said the government has granted Nawaz the permission keeping in view his “serious medical condition”.

Naseem further said that the interior ministry had received an application from PML-N President Shehbaz Sharif along with Nawaz’s medical reports from the Sharif Medical City Hospital requesting that the former premier name be removed from the ECL. He added that the Punjab medical board had also endorsed the reports.

“The subcommittee informed the cabinet that Nawaz Sharif’s condition is very serious,” he said, noting that along with a drop in the blood platelets count, the former premier was also suffering from cardiac complications.

The minister said the cabinet members were unaware of the gravity of Nawaz’s health condition and most of them voted in favour of allowing the ailing politician to travel abroad once they were informed about it.

“The Sharif family has the right to reject the government’s decision or to challenge it in in a court of law,” he added.

PM’s aide Akbar said Nawaz could go to any country of his choosing but it was important that he returned. “We will convey to the country where he is going through diplomatic channels that he is being sent on these [medical grounds] conditions,” he added. “The decision should not be considered a political one.”

“We will not accept a government court overruling a court of law,” she added. “This decision is discriminatory and based on political vindictiveness. We will not submit the indemnity bond as the party had fulfilled all legal requirements at the time of his [Nawaz] bail.”

Aurangzeb warned that the government would be held responsible in case anything happened to the ailing PML-N Quaid.

Speaking to a private TV channel, PML-N leader Muhammad Zubair said the government had only resorted to political point-scoring and the indemnity bond had no legal value.

He pointed out that the law minister had not raised the issue of indemnity bond for allowing Musharraf to travel abroad for medical treatment back when he was the lawyer for the former military ruler.

“The PML-N had already informed the government about its decision yesterday [Tuesday],” he added.

A day earlier, Nawaz had refused to travel abroad for his treatment on the terms set by the government.