After Plan A, Fazl all set to test Plan B

After Plan A, Fazl all set to test Plan B 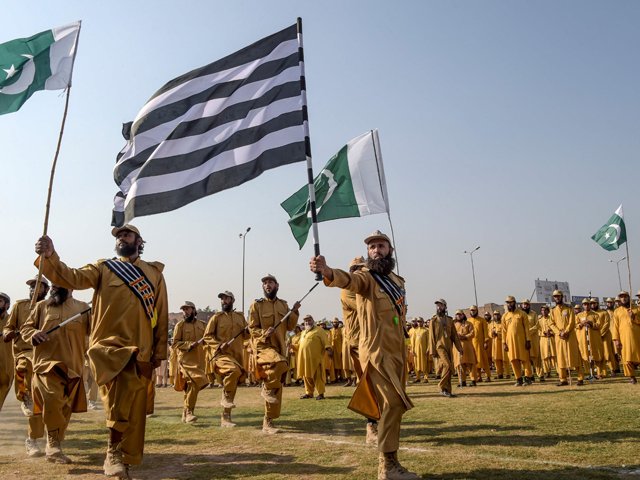 ISLAMABAD: After seeing that the 13-day sit-in in Islamabad did not garner desired results, Jamiat Ulema-e-Islam-Fazl (JUI-F) chief Maulana Fazlur Rehman has announced that he would reveal Plan B of ‘Azadi March’ for the ouster of Prime Minister Imran Khan on Wednesday (today).

During a meeting of the JUI-F leadership at Maulana Fazl’s residence on Tuesday, it was decided that all main roads throughout Sindh, Punjab, Balochistan and Khyber-Pakhtunkhwa would be blocked under Plan B to step up pressure on the government. They decided that the marchers would block all main roads of Islamabad and Rawalpindi as well, while protest demonstrations would also be held in other cities, including Karachi, Lahore, Multan etc.

“Party leaders discussed closure of highways in different provinces and a lockdown of key places in Rawalpindi and Islamabad,” said the JUI-F sources.

In the meeting, Fazl was briefed by the party’s provincial chiefs about Plan B.

The JUI-F chief expressed satisfaction over the arrangements in place for executing the plan.

Sources said that Fazl tasked the provincial chiefs with identifying major arteries, highways and entry and exit points in a bid to pressure the government into accepting its demands, which was why he had not announced the details of the plan on Tuesday.

Later, addressing the ‘Azadi March’, Fazl praised the participants of the sit-in for bearing the extreme weather conditions, saying the leadership’s heads were held high due to their bravery.

“The provincial chiefs will disclose the details of Plan B,” said Fazl, urging the people sitting in their homes to come out and join the participants of the march.

“Very soon everyone will know that the real thief is the ruling elite,” said the JUI-F chief. “You [participants] are very close to reaching your goals.”

He said people were thinking that rigging took place in a very systematic manner during the election, adding that they thought that willingly or not, everyone would accept the government, “but you [participants] have crushed the pride of this government”.

“This is our victory, which you [participants] have achieved,” he added.

“The very next day of the election, we said the results are unacceptable,” he said. “We rejected the results at a time when no one was willing to raise his voice.”

Fazl accused the government of not being able to run the country.

“The country’s sinking economy needs your support,” he told the participants. “A bit more bravery is required.”

The participants of the march braved harsh weather, while there were reports of some casualties during the sit-in.

Several meetings have been held between the government and the opposition parties but to no avail. Prime Minister Imran has made it clear in his speeches that the opposition’s demand for resignation was unjustified and could not be accepted at any cost.

The government’s negotiating team, led by Defence Minister Pervaiz Khattak, and opposition’s Rahbar Committee so far failed to reach a conclusive decision on the ‘Azadi March’.

Besides, several meetings were also held between Punjab Assembly Speaker Chaudhry Pervaiz Elahi and Fazlur Rehman but negotiations between them could not succeed.

Islamabad Inspector General of Police Muhammad Amir Zulfiqar Khan has reviewed the security plan in the wake of the JUI-F’s Plan B and ordered increasing the number of policemen on major thoroughfares.

The decision was taken during a meeting attended by DIGs, SSPs, AIGs and SPs at the Central Police Office on Tuesday.

The IG said security of other areas along with the “dharna” site needed to be improved.

“The Islamabad police is utilising all resources available at its disposal to protect the lives and properties of citizens,” said the IG.

Further, a notification by the Sindh police stated, “A credible source has reported that according to Plan B, JUI-F will stage a sit-in at Oil Terminal Area entry and exit gate, ICI Bridge, Merewether Tower, Three Swords and Zainab Market roundabout for an indefinite period to disturb the peaceful atmosphere of the city and deliver economic loss to the government.”

It stated, “Students of madrassas and local workers will be used for the sit-in. They will bring tents and other [necessary] items for a long stay.”

It instructed the police officials to keep strict vigilance and adopt all precautionary measures to pre-empt any untoward incident.