The actor shared that popula­r TV host had also seek permis­sion of his second wife and she has no issues with it
By Entertainment Desk
Published: November 8, 2019
Tweet Email 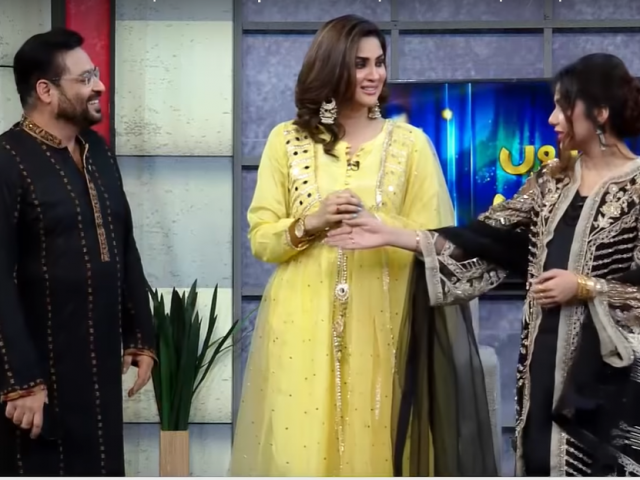 TV personality Aamir Liaquat Hussain’s second marriage to Tuba Aamir created quite a buzz. The popular host tied the knot for the second time to Tuba last year in November.

Aamir’s second marriage and his take on his first wife, Bushra, stirred quite a controversy. However, seems like Aamir is yet again ready to tie the knot.

Aamir and Tuba made an appearance at actor Fiza Ali’s talk show where he proposed to the actor, in front of his wife.

As soon as Ali announced the couple to enter the stage, she asked Tuba if she could stand besides her husband. To this, Aamir joked, “It could have been you who would have been announced to come with me, but you’re a little late.”

In a recent interview, Fiza revealed how Aamir had proposed her earlier as well.

“Aamir sahab is a great person. He has a clean heart and he is a very jolly kind of person. He does not keep anything in heart, he says what he thinks,” she said.

“When I got divorced, he proposed to me in front of his wife with a good gesture. It was not like we used to meet or something. I just went to Karachi and he directly talked to me about marriage when he got to know that I have separated from my husband,” she continued.

“He wanted to get married to me in front of the world. He proposed to me in a very nice manner in front of his wife (Bushra). But I was battling depression and used to ignore everything. Then after this, I heard about his second marriage with Tuba. Both are my really good friends,” Fiza shared.

“He came on the show and joked about it again. He said it’s not too late to get married,” Fiza laughed. “He said Tooba has no problem with it.”