They just want to create unrest, they will not succee­d: defenc­e minist­er
By ​ Our Correspondents
Published: November 2, 2019
Tweet Email 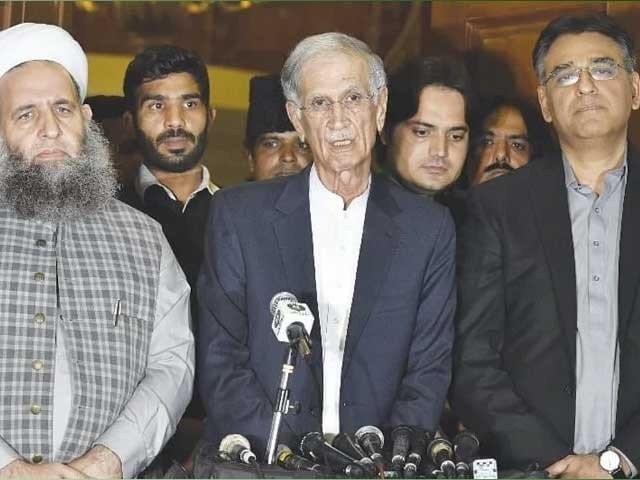 ISLAMABAD.: The embattled government has refused to give in to JUI-F Maulana Fazlur Rehman who gave Prime Minister Imran Khan a two-day ultimatum on Friday to step down to else prepare for the consequences.

Defence Minister Pervez Khattak, who heads the government’s negotiating committee, said that the prime minister’s “resignation is out of the question” and warned of suing the JUI-F chief for inciting his followers to arrest the prime minister.

Addressing his so-called ‘Azadi March’ on Friday, Maulana Fazl demanded that the prime minister resign in two days or else “we will announce our next strategy”.

Khattak told reporters, after chairing a meeting of the government’s negotiating team on Saturday that the resignation demand was off the table. “The government will not succumb to the opposition’s threats and pressure tactics. No one should even think about it [the prime minister’s resignation].”

The ‘Azadi March’, led by Maulana Fazl, is the first concerted opposition campaign against Prime Minister Imran since he won elections in July last year. The march started from Karachi on October 27 and entered the federal capital on Friday.

The defence minister stressed that there was a signed agreement between the opposition’s Rahbar Committee and the government’s negotiation team, expressing hope that the ‘Azadi March’ leaders would abide by it. He warned of strict action if the opposition reneged.

“Our doors are open for talks with the opposition but we will not allow any attempt to create chaos,” Khattak, flanked by Education Minister Shafqat Mahmood and former finance minister Asad Umar, told the news conference.

“If they violate the agreement, the administration will take action. Make no mistake. If the opposition resorts to violence or causes any damage to public or private property, they will be held responsible,” the minister added.

“If the participants of ‘Azadi March’ move forward from the designated venue, it will be tantamount to breach of the agreement, which would compel the government to take action as per the law,” warned Khattak.

On the other hand, he continued, the government did not want any clash with the opposition and desired settlement of issues amicably. He added the government negotiators were in contact with the Rahbar Committee.

Khattak said the government would approach the courts against Maulana Fazl for inciting his followers to arrest the prime minister. “It amounts to treason and we will be submitting our plea in court on Monday,” said the minister.

The government team categorically denied that the opposition had demanded reversal of the extension given to army chief Gen Qamar Javed Bajwa. He clarified that the army was playing a “completely neutral” role.

The minister said the Pakistan Tehreek-e-Insaf’s (PTI) core committee also condemned the statements made by the opposition. “Our national institutions are our pride and are working for the nation,” he said. “If the opposition has any issue, they should talk to the government.”

Khattak stated that the ongoing protest would undermine the Kashmir cause. “Prime Minister Imran has very effectively highlighted the Kashmiri cause globally. The protest has taken the spotlight off the Kashmir issue.”

Replying to a question, Mahmood said the opposition should lodge their complaint with the Election Commission of Pakistan (ECP) if they had any objection over the results of the 2018 general elections.

Opposition won’t settle for anything less than PM’s resignation