ISLAMABAD: Ratcheting up pressure on the beleaguered government of Pakistan Tehreek-e-Insaf (PTI), JUI-F chief Maulana Fazlur Rehman has set a two-day deadline for Prime Minister Imran Khan to step down.

“People have given their verdict… they want freedom from this government,” the 66-year-old firebrand cleric said while addressing tens of thousands of opposition workers camping in Sector H-9 on Friday.

Travelling in buses, cars and on motorcycles the main caravan of JUI-F workers, led by Maulana Fazl, had stopovers at different towns and cities en route to the capital.

The caravan reached the capital on October 31 and camped at a vast ground in Sector H-9 designated for the protest where they were joined by workers of other opposition parties – including PPP, PML-N, ANP and PkMAP.

The two opposition parties – the PPP and the PML-N – have thrown their weight behind the Maulana because their leaders are facing corruption charges which they claim are part of Premier Imran’s political vendetta. 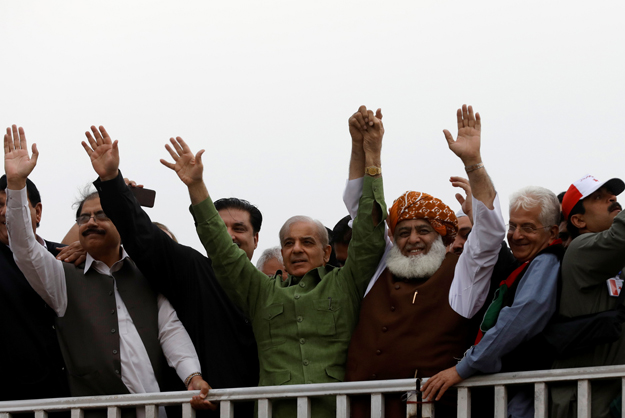 Having said that, the cleric dropped a veiled threat, saying that if the institutions tried to protect the illegitimate government after the expiration of the two-day deadline, then they would be free to form an opinion about the institutions.

He did not name any institution, but the opposition parties allege that the Imran Khan government has the backing of the powerful security establishment.

The cleric said the PTI government has no right to stay in power as it had come to power through ‘systematic rigging’ in the 2018 general elections. “We reject the results of the rigged elections. This prime minister should resign,” he said to thunderous sloganeering from his supporters.

The JUI-F chief picked holes in the economic policies of the government, saying that the “incompetence” of the PTI administration has destroyed the economy. “People are committing suicide. They are forced to sell their children … we won’t let the government to further destroy the country,” he said.

“They promised five million houses and 10 million jobs [before coming to power], but only State Bank’s governor and FBR’s had come to Pakistan for job – and they too had been sent by the IMF,” he said.

He was referring to speculation that SBP Governor Reza Baqir and FBR Chairman Shabber Zaidi have been appointed against the coveted slots at the behest of International Monetary Fund (IMF) which has given Pakistan a $6 billion bailout package.

The cricketer-turned-politician, Imran Khan, who came to power based on his massive his fan-following, appears to have lost some of his personality charisma, due to the rising prices of food and daily-use items.

The JUI-F chief has been accused by the government of taking the global spotlight off Indian Occupied Kashmir (IOK) by staging his rally. The cleric, however, told his supporters that the PTI government was to blame for damaging the Kashmir cause.

“We will fight for the rights of Kashmiris,” he said. “On the one hand our relations with India are strained due to the Kashmir siege, while on the other hand, we are opening Kartarpur corridor for Sikh pilgrims.”

Speaking on the occasion, Shehbaz came down hard on the PTI government for its “anti-poor policies” and “arrogant attitude” of Prime Minister Imran.

The PML-N president, whose family has suffered the most due to the government’s accountability drive, denounced Imran as a “brainless” leader who “relies on sorcery and supernatural guidance” for key policy decisions.

“This protest will sweep away Imran Khan and his government,” Shehbaz said while referring to the ‘Azadi March’.

“If God gives us another opportunity, we will put up a united front and work on fixing Pakistan’s economy,” he said. “Imran Khan has full support of all institutions. If we had only 10% of this support, we would have taken Pakistan on a Sputnik-like flight.”

‘Imran having taste of own medicines’

The prime minister has questioned the justification of the opposition’s ‘Azadi March’, while defending his party’s marathon dharna in Islamabad in 2014.

The PML-N president said Imran was having taste of own medicines. He reminded the premier that the PTI had set a precedent for such protests.

“This sea of humans has made it clear that now is the time for change. We will rebuild Pakistan once again under the leadership of Nawaz Sharif and our economy will be back on its feet within six months,” said Shehbaz.

‘Time is up for selected govt’

The scion of the Bhutto dynasty, who also shared the stage with the opposition leaders, said that the power-show is a loud and clear message for Premier Imran that his time is up now.

“This is a selected government and its policies have proven that public welfare has never been a consideration for them. The people of Pakistan have never and will never accept this government,” said Bilawal Bhutto Zardari whose father, aunt and key leaders of his party are also facing corruption cases.

Bilawal heaped criticism on the government for its flawed economic policies which have made the life difficult for the common man. “Our country’s economy is dependent on outside influences,” he said while citing the “PTI-IMF budget” as an example.

Questioning the legitimacy of the present democratic set-up, Bilawal said the people of Pakistan favoured the constitutional and democratic system of the past.

The PPP leader also lashed out at the alleged media blackout of the ‘Azadi March’ and vowed that his party would support all democratic efforts for the removal of the “puppet prime minister”. 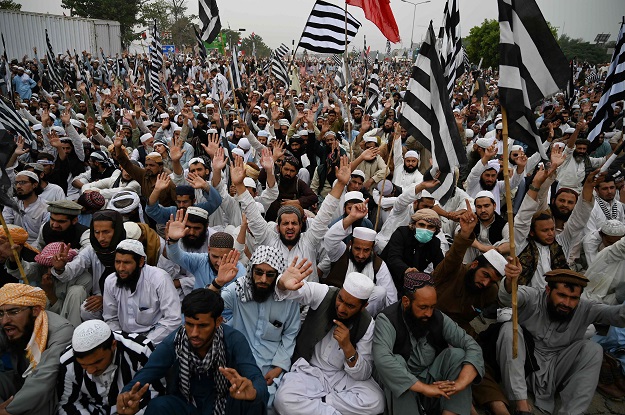 The ‘Azadi March’ is said to be the first concerted opposition challenge that Premier Imran Khan has faced since he won the election last year.

He had promised to break the country away from its legacy of corruption and on plans to pull 100 million people out of poverty. But his government, like many of its predecessors, was forced to turn to the IMF for a $6 billion bailout in July.

The opposition says the government is illegitimate and is being propped up by the military, which has ruled Pakistan for about half of its history and sets security and foreign policy. The military denies meddling in politics.

Premier Imran has dismissed the opposition calls to step down and the government has warned it will not tolerate chaos on the streets.

Army chief General Qamar Javed Bajwa has urged the prime minister to handle the protest peacefully and avoid violence by both sides, a military spokesman said. 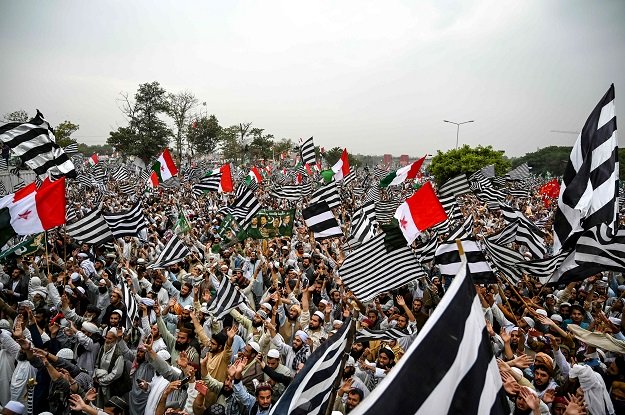 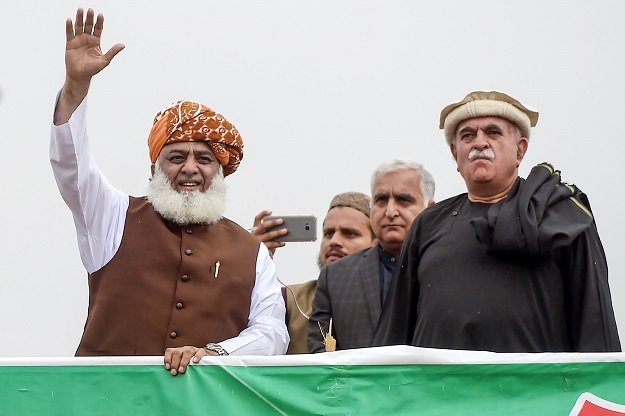 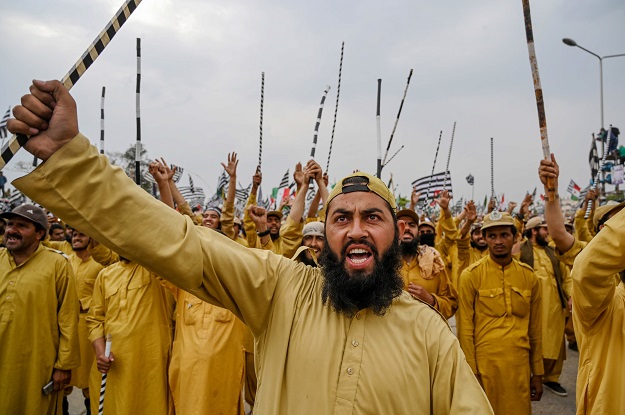 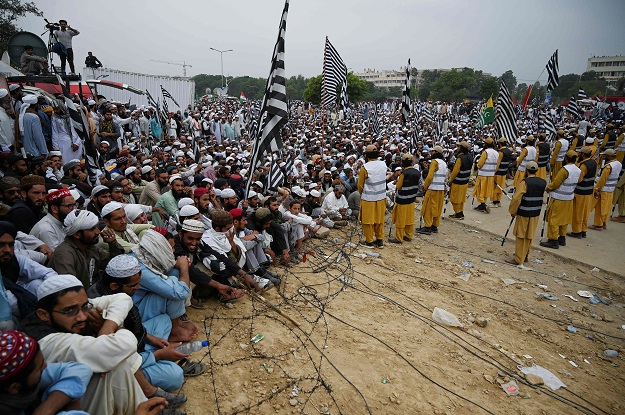 Security is tight in Islamabad with the government and diplomatic sector – just a few miles from the rally site – sealed off, roads blocked by barriers of shipping containers.

The government had beefed up security ahead of the marchers’ arrival in Islamabad, deploying police and Rangers in Red Zone as well as Faizabad Interchange, Kashmir Highway and other locations.

The government has deployed 6,000 personnel of police and Rangers for the security of the protest venue in the H-9 area of Islamabad.

Police sources said the law enforcement personnel deployed at the venue had been strictly directed to behave politely with the marchers.

However, they have also been told to take strict action if the participants of the march tried to travel to some other area of the city. 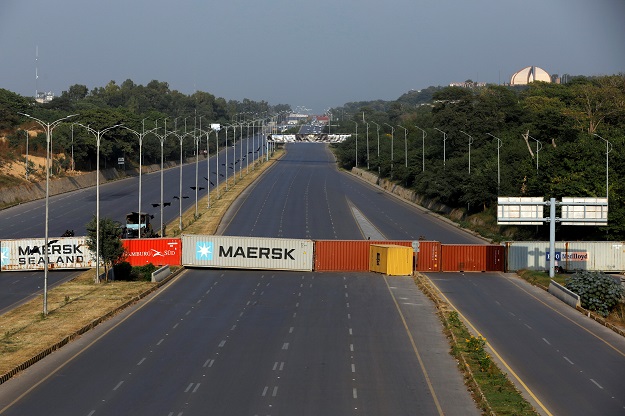 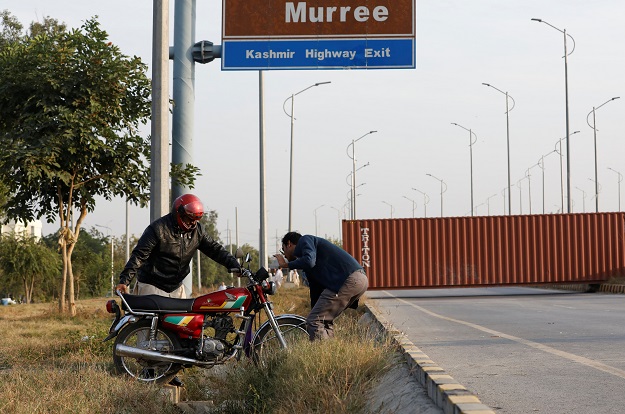